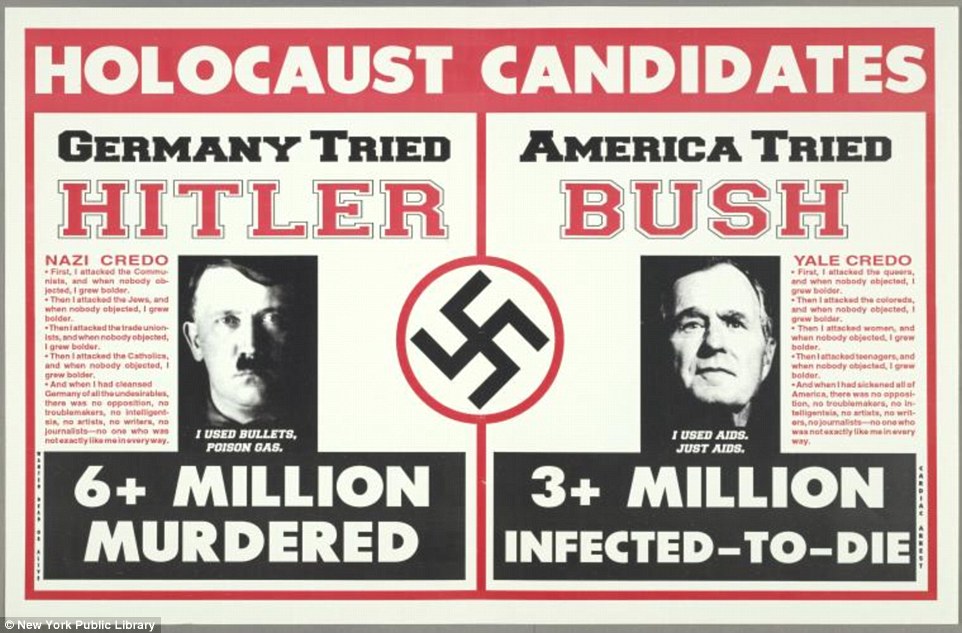 Back then, Leftists compared Bush 41 to Hitler to dramatize AIDS deaths as they now use the Hitler analogy with Trump

The politics of disease: Democrats, liberal media taking a page out of the Reagan-AIDS playbook to bash Trump

I began my career as a reporter in Washington covering the FDA in 1986 during the peak of the AIDS crisis.

There was no vaccine, no drug, and the test kit for the virus that causes AIDS (HIV) was approved only in 1985 when the announcement of actor Rock Hudson having AIDS shook the country and focused greater media and political scrutiny to the crisis.

Despite FDA in 1987 approving the first AIDS treatment drug (known then as AZT), and in a record 107 days,  the liberal narrative of the time was that the Reagan administration being conservative and for “family values” hated gays and thus dragged its feet on the crisis. The media, however, loved Reagan’s Surgeon General Dr. C. Everett Koop for courageously advocating condom use for prevention of HIV and other sexually transmitted diseases.

With the 1988 election coming up and the desire of Democrats to end eight years of Republican rule in Washington, the gay rights groups, media and Democrats did their utmost to make AIDS a key issue in that campaign in order to defeat Vice President George H.W. Bush and elect liberal Democrat Gov. Mike Dukakis of Massachusetts.

Well, it didn’t work and Bush was elected.

And, during his term, his administration developed novel pathways to speed HIV drugs to the market – notably a 1992 law that required drug manufacturer user fees to fund reviews, thus cutting review times for all drugs.

Bush’s efforts of course did not help him in the 1992 election and he was defeated by Bill Clinton.

This chart, based on data from the Centers for Disease Control & Prevention, shows that by the time Bush 41 was elected, under 200,000 Americans had died from AIDS.

By the time Obama was leaving office, deaths leapt to nearly 700,000.

Furthermore, some 1.2 million Americans are living with HIV – up from about 820,000 when Reagan left office, according to this graphic.

But politics being politics, and Democrats and liberals having little faith in God and total faith in government, it is quite easy for them to use the “Reagan-Bush hate gays” playbook in their nightly diatribes against President Trump and his administration in how they are handling coronavirus (COVID-19).

Plus, with the stock market tanking and hospitality industry laying people off, Democrats think they have the perfect storm.

However, I don’t recall Republicans blasting the Obama Administration’s handling of some four international outbreaks that occurred on its watch – MERS, ZIKA, H1N1 and Ebola.  More people died in those outbreaks than from coronavirus, so far.

In addition, when Reagan was president, Democrats criticized cutbacks in CDC, FDA and other agencies like they are attacking Trump now.  Again, I covered FDA at the time and yes, while the agency was in a funding funk, there were just no applications out there of significance to control the spread of the virus, which is why Surgeon General Koop spent so much effort on prevention (i.e. “safe sex”).

I discovered writing one of my newsletters in 2014 that an Ebola vaccine was stalled before FDA during the 2014 epidemic in Africa.   Not even Republicans who controlled Congress by 2015 did anything to slap the agency for its failure to get that one out.

The reality is that the biomedical industry and public health bureaucracy, regardless of which administration is in power, is reactive, not proactive.  At the time of the AIDS crisis, both FDA and noted that the U.S. was woefully inadequate in viral drugs – only eight antivirals were on the market in 1987.  Rather, the industry and government were vested heavily in antibiotics – drugs designed to treat bacterial diseases, not viruses.

Was that Ronald Reagan’s fault?  No!

And, science cannot predict with accuracy every potential infectious disease coming down the pike, nor magically come up with an antidote.  We still have no true AIDS vaccine to inoculate the world and eradicate HIV the way vaccines eradicated polio and measles — just the drug PReP, which can prevent HIV.  Some 37 million people worldwide have AIDS and in 2018, some 770,000 died!

However, as the tables show, HIV is under control, but it took years before the initiatives of the Reagan, Clinton and two Bush administrations bore fruit – notably Bush 43’s international AIDS initiative, for which he and Republicans get no credit.   Read more about Bush’s PEPFAR here:

Another difference with AIDS is that China – which is the source of coronavirus – is a closed authoritarian state with weak public health and safety standards, where people breed and eat exotic animals that carry viruses.  Unlike African nations, China fails to cooperate with international health organizations and tries to cover things up, so blame should be directed at China, not the Trump administration.

However, it’s an election year and Democrats so desperate to get back into power are willing to scare the hell out of the country and the markets in order to get their people elected.  Perhaps the strategists know they have a weak candidate in Sleepy Joe Biden just like they had a bad candidate in Michael Dukakis and feel the need to pull out all the stops to help them.

But playing Disease Politics failed with Dukakis in 1988 and I hope it fails this year, too.

The politics of disease: Democrats, liberal media taking a page out of the Reagan-AIDS playbook to bash Trump was last modified: March 10th, 2020 by Guest Contributor Ken Reid