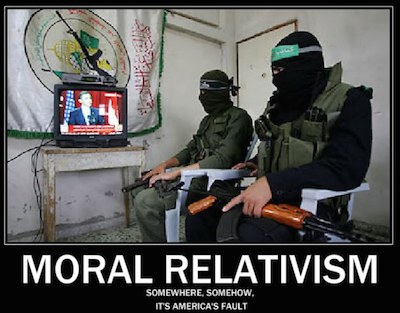 The Politics of Nice Could Get Us All Killed

“The bearing beam of the new foreign policy of this generation is that no issue or political system can be judged on the basis of comparative morality or progress[read_more] – especially against a Judeo-Christian standard. One system is no more virtuous than any other, body counts notwithstanding. Obama is its avatar.”

We are living through one of the most challenging and dangerous periods in American history – and the greatest danger to the nation lies within our own borders.

America’s political and civilian leadership have steadily exhausted their moral and intellectual clarity over a generation or more, replacing the strength of the nation’s Judeo-Christian character with pandering relativism, multiculturalism and free-range postmodernism.

In both domestic and foreign policy this shift has seen the defeat of reason and self-interest by the politics of nice. Nowhere is this more critical than in our foreign affairs, where it has the potential to get us all killed.

While the world is as violent as anytime in a generation and drifting further into chaos, the American response has grown increasingly vague and undefined, brewed up in faculty lounges and implemented by a “ruling class” that abhors conviction and virtue.

Mirroring domestic politics, American’s foreign policy is now primarily concerned with theater and personalities, where practical and realistic observations and assessments based on the motives and behavior of others is ignored or rationalized as the result of how certain cultures were or were not treated by America, capitalism, or the colonial powers of yesteryear.

The bearing beam of the new foreign policy of this generation is that no issue or political system can be judged on the basis of comparative morality or progress – especially against a Judeo-Christian standard. One system is no more virtuous than any other, body counts notwithstanding. Obama is its avatar.

One product of this foreign policy shift is that all identifying descriptions of those who seek to do great harm to America, what they are willing to do to accomplish their goals, and what we should do in our own self-interest have been largely removed from the public discussion, as have our historical concerns for the protection of innocent life, the restraint of evil, and self-defense.

The other consequences of this paradigm shift in philosophy are now very clear.

The Middle East is in ruins and we no longer seem able to discern friend from foe. Iraq is teetering again, and Afghanistan may be close behind. Syria is a smoldering ember and Egypt in a precarious peace. Iran sits poised to become a nuclear power. From Pakistan to the Pacific corridor, violent Islamists scheme in the background, barely constrained. All of this while Israel is increasingly the beleaguered enemy of the West and anti-Semitism is a growing Western trend.

Today, when Islamic radicals push their depraved totalitarianism, founded in Sharia law and its celebration of death, our ruling class simply refuse to call them what they self-evidently are; evil and wicked beyond the reach of reason and uninterested in the concept of human freedom.

The politics of nice has also spilled over into other institutions. The frequently incoherent Western Christian community watches as radical jihadists are gaining ground one head at a time, busily burning Christian churches and crucifying, hanging and beheading untold thousands of Christians, including children, across swaths of Africa and the Middle East. The collective protests are dish-water weak and unconvincing in light of the inhuman actions.

In China, the U.S. has deliberately dismantled and shipped major parts of its industrial capacity – and allowed virtually unchecked theft of intellectual property that would take the Chinese decades to do themselves, if at all – to a country that murdered tens of millions of its own citizens within the lifetime of many of us, still employs brutal repression, especially of the mushrooming Christian community, and whose military command unambiguously state they will bring America to heel. In fact, the more quarrelsome and the more militarily aggressive the Chinese communists and crypto-fascist oligarchs become, the more slavish American policy grows.

Very few will label China the rouge danger that it is. When you can’t make a toaster oven or a light bulb in the U.S. anymore, this is what happens.

The Russians at least are transparent. They are using a mixture of money, blackmail and brute force to bend Ukraine and central Europe to their will, and make no excuses for wanting to reassemble lost nation states inside the Russian orbit. The rebuilding of the totalitarian state is defiantly celebrated in public by the bare-chested, tiger-hunting Putin, taunting the West, while Obama chews Nicorette gum in public poses.

Even though they may be in a demographic death spiral, the Russians are no less dangerous. The internal pressures generated by falling oil prices threatens the soft underpinnings of the weak Russian state (bedeviled by its own Islamic jihadists) that is excessively reliant on oil, leaving the security of its still plentiful nuclear arsenal in question. The President seems vaguely interested in the inequity of it all, but unwilling to identify the threat by its name.

The radical Obama-Democrat policies centered on deliberately dismantling American influence and disassembling the military capability of the nation, aided by the stunningly inept and weak-kneed intellectual opposition offered by Republicans, have created a theater of disaster around the globe.

You don’t have to be an historian to understand what is happening today. You only have to observe the rules on any elementary school playground. Left to their own devices, intimidation and violence most often carry the day unless checked by the strong and the virtuous.

The foreign policy challenges of this era are how to redefine and protect America’s genuine and vital interests while maintaining a defensive capability that makes the United States impervious to economic and military black mail.

America has to begin by making the well-being and security of our own nation the overriding objective in any foreign policy. This demands “public clarity,” as Professor Emeritus at Boston University, Angelo Codevilla argues. A policy that replaces the “creative ambiguity” of the Kissinger generation, with a policy that places American interests and American values at the center of our relations with other nations with precision and focus.

So far, there seems to be little in the way of coherent strategy, nor even much thought given that goal. A new American foreign policy built around America’s best interest deserves a full debate in both the House and the Senate, as the President prepares to ask Congress for new authority to use military force against ISIS.

In addition, a new foreign policy debate should be a key part of the agenda for Republican candidates in 2016. National security – the primary constitutional function of the Federal Government – deserves serious discussion. This will be the opportunity for conservatives to leverage their collective position in the primaries, and press for fresh, bold conservative voices to prevail against the politics of nice.

These are some of the critical questions Republican candidates should answer:

In Middle East policy, what is our national objective? How do we fight the Islamic radicals and where are we willing to do it? Are we willing to see Iran with a nuclear weapon? Will we strip the citizenship from Americans who join ISIS as enemy combatants, and then want to return to the U.S.?

In Chinese policy, will we demand equal trade policies with equal access to the Chinese economy and currency stabilization? Is the U.S. willing to pull favored trading status if China refuses to open its market and end its massive theft of intellectual property rights? What, if anything, can we do to counter Chinese aggression towards Japan, the Philippines, and Taiwan?

In Russian policy, how do we influence a regime that has little regard for sanctions and what role should we leave to the Europeans to manage? Should we be upgrading our own nuclear force, and when do we take national missile defense seriously?

Professor Codevilla condenses what the realistic goal of an American-focused foreign policy would be; “Serious, clear, unambiguous policy that communicates clearly to all what the United States is ready, willing, and able to do is the key to such peace as may be possible.”

[Professor Codevilla’s extensive writing on foreign policy can be found at   http://www.claremont.org/contributor-list/116/   His latest book, “To Make and Keep Peace” is now available in paperback on Amazon and major book retailers.]

The Politics of Nice Could Get Us All Killed was last modified: February 12th, 2015 by Michael Giere

Congratulations, Mike, on a nice essay.

Maybe these politicians will get the hint when Al shabaab begins closing the Saudi pincher through Yemen. There’s fixing to be a big war for the heartland of Muslim thought while our leadership is naively thinking they have the upper hand.

It’s more than the politics of nice….it is a refusal by our “leaders” to accept reality. For example, I recently came across an interview with the President and First Lady in People Magazine. One of questions was how Barack and Michelle Obama discussed the Michael Brown and Eric Garner incidents with their teenage girls. Mr. Obama answered that when he and Michelle are around the dinner table, they point out to their daughters “that too often in our society black boys are still perceived as more dangerous, and that it will be part of their generation’s task to try to eradicate those old stereotypes.” I don’t know in which world the president is residing, but it certainly is not the real world. The sad fact is that black males commit violent crimes at a rate that is about EIGHT TIMEs that of white males. “Old stereotypes?” Indeed. Is it any wonder this president cannot bring himself to correctly identify the threats abroad, when he has his head stuck in the sand about black crime at home?