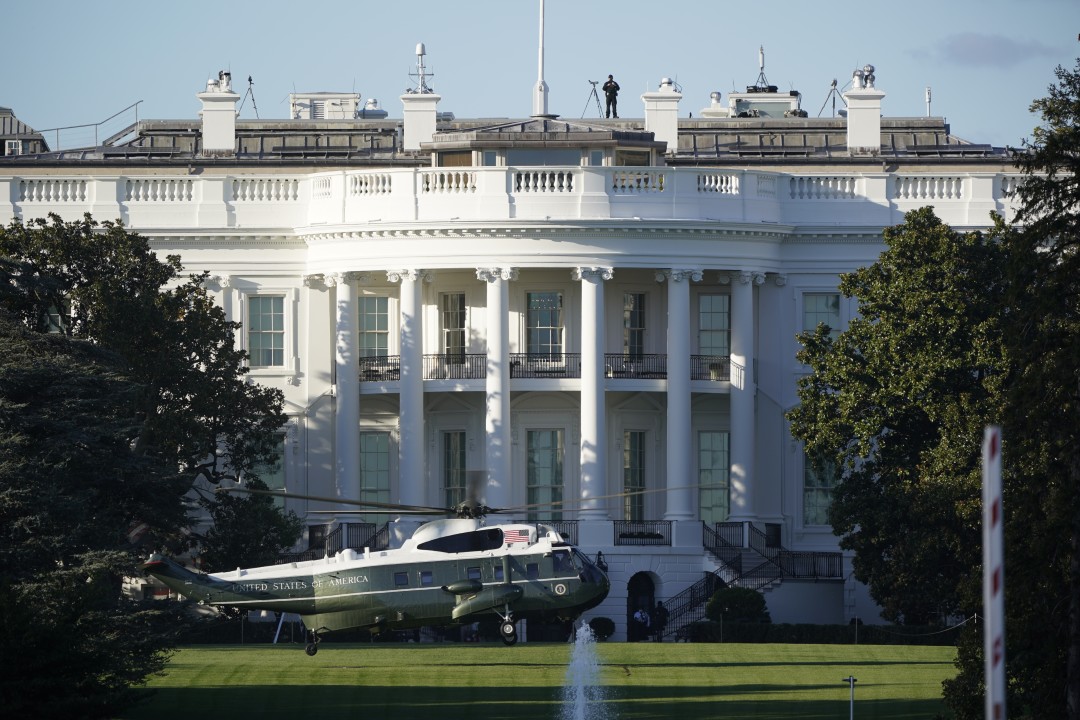 Marine One landing at the White House to take the President to Walter Reed hospital (J. Scott Applewhite / Associated Press)

As we know it was announced at 1:00 am Friday morning the President and the First Lady tested positive for COVID-19. On Friday, around 7:00 pm the President was taken to Walter Reed National Military Medical Center “out of an overabundance of caution”. He is, after all, the President.

Today it has been reported that the President’s temperature has returned to normal, and his cough and congestion “are improving”. The President is doing very well and does not require any supplemental oxygen. He is ‘resting comfortably’ in his suite at Walter Reed.

Before leaving the White House the President was put on a cocktail of the experimental drug Regeneron and today in the hospital he had his first dose of Remdesivir. Both drugs are given very early in treatment, even before symptoms appear, to stop an overly aggressive response from the immune system which can cause damage to lungs, kidneys, and heart.

One such lesson is that COVID-19 may be best understood as two different diseases, requiring two different types of treatments. The infection itself can lead to the hallmark symptoms of fever, fatigue, headache and shortness of breath, as the virus burrows into a personâ€™s respiratory tract and starts to replicate in the first few days after exposure. But as the virus continues to gain a foothold, the bodyâ€™s immune system can mount a hyper-aggressive response. That attack on the virus, along with the inflammation that ensues, can damage the lungs and other organs and contribute to some of the more severe symptoms, including respiratory failure, blood clots, strokes and even death.

Treating the early infectionâ€”sometimes before symptoms appearâ€”with antiviral medications, or the appropriately dedicated immune cells designed to target the virus, might help to prevent the disease from progressing to the point where the immune system starts to do major damage. The experimental treatment the President received represents one such therapy that researchers are studying. The drug cocktail is made of two monoclonal antibodies that were found from combing the blood of people who recovered from COVID-19, as well as from infected mice.

In addition to these drugs the President is also taking zinc, vitamin D, famotidine (Pepcid), melatonin for sleep, and a daily aspirin to prevent blood clots and heart attacks. More on the drugs his doctor has prescribed the President here.

Some excellent photos of the President leaving the White House and his arrival at Walter Reed here.