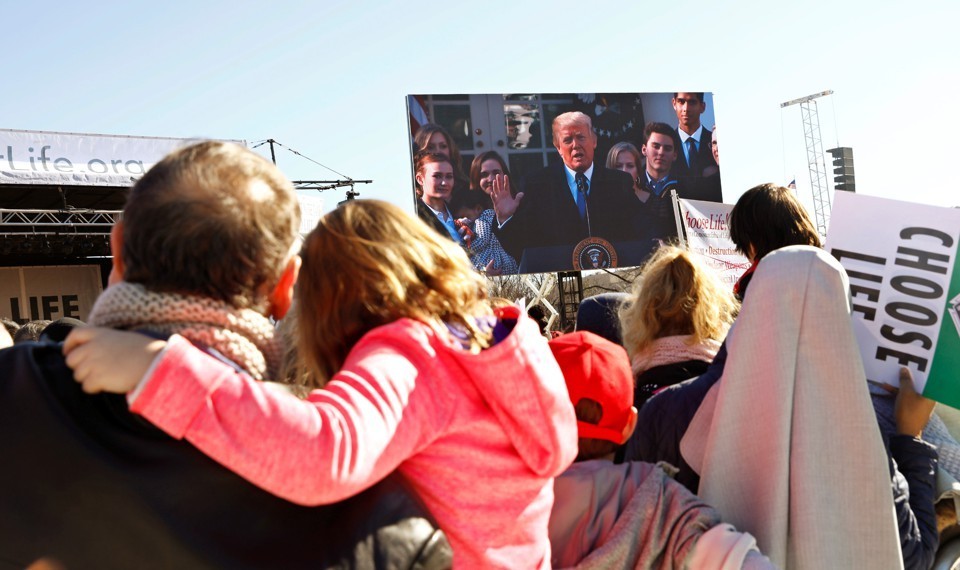 Last week, the pro-life movement observed the 45th anniversary of the U.S Supreme Court decision that allowed abortion in all states – -Roe v. Wade – and rejoiced at the annual March for Life Rally in Washington as President Trump became the first American president to address the rally on live video.

Trump told the rally “Under my administration,” he promised, “we will always defend the very first right in the Declaration of Independence, and  that is the right to life.”  He urged Congress to pass a late-term abortion ban.

House Speaker Paul Ryan, introduced as the “Pro Life Speaker,” stranding with other Republican House members, said the “pro-life movement is a movement that is rising.”  He said the movement had “science on its side,” noting how advances in ultrasound have clearly determined the fetus is a living, breathing and thinking person.

But when I look at the data with a cold eye, with between some 54 and 59 million children having been terminated in the womb since Roe V Wade was decided in January 1973, I have to say sadly that the pro-life movement is not a success story and could be the most long-lived unsuccessful political or social movement in modern history.

In addition, despite the fact the movement is important in the Republican Party – few Republicans get nominated for even local offices if they are not pro-life – the activists really do not do well at returning the favor in terms of helping GOP candidates stay in office.

Here are some startling facts:

The National Right to Life Committee, whose founding predates Roe and is considered the largest pro-life organization, touts data from the Centers for Disease Control and Prevention and Alan Guttmacher Institute in Philadelphia that abortions have dropped 42 percent from 1990 to 2014 and that the number of U.S. abortion providers dropped from a high of 2,918 in 1982 to just 1,671 in 2014.  Overall, abortions are down from an all-time post-Roe high of 1.6 million in 1990 to 962,000 in 2014.

Various prolife groups repeat these statistics to “prove” their efforts are working .

But  Guttmacher, – which tracks pregnancy and fertility issues and supports abortion rights, says: “A more important driver of the declining abortion rate…appears to be improved access to contraception, particularly long-acting birth control options like IUDs.”

Another factor is the widespread use of abortifacient drugs like Mifeprex (i.e. RU 486) to abort pregnancies   The “Chicago Tribune” reported earlier this year 31 percent of American abortion patients choosing pill-induced abortion over surgery.  Not sure these are included in CDC or Guttmacher numbers, but taking abortion out of the clinic and into the home has changed the political dynamics.

Efforts to block abortifacients from being marketed have failed, in large part due to the power and influence of America’s pharmaceutical companies.  While Mifeprex is not among the top 100 selling drugs –– meaning it has sales in the U.S. under $250 million — drug companies have long lobbied state legislatures and Congress to prohibit restrictions of drug marketing other than on scientific grounds.  In other words, if FDA says its safe and effective for its intended use and target patient population, politicians should bud out, and the drug industry will go to the mat to ensure that so no precedents are set on other drugs.   The battle over Gardasil is one other example.

Other than the Hyde Amendment in 1978, which barred Medicaid for abortion, I cannot think of any other approved federal law restricting abortion. Efforts by state legislatures to implement late term abortion bans, “Personhood” bills, requirements to have an ultrasound before getting an abortion have largely failed and in some cases, have caused political consequences for the sponsors – including here in Virginia.

So, how can a movement take on so many activists, have a lot of influence in the Republican Party (the day of prolife Democrats is long gone), continue to raise money for its efforts, yet get very little in return?

I think the answer is that politicians really do not wish to be involved in making decisions about motherhood and are only willing to take it so far before getting shot down in the courts – and the court of opinion.

And, the sad reality is that the abortion procedure is largely safe for the woman carrying the fetus – although there is evidence of post-abortion complications.  This adds to the difficulty of doing away or limiting abortion.

So, the only real success the prolife movement has had is saving a number of women from having abortions (do not have data on that), move public opinion against abortion and ensure there is a litmus test in the Republican Party – it’s hard to get the GOP nomination for any office unless you are prolife.  I became prolife not due to politics, but because my wife and I had fertility issues after we married in 1994, tried adoption, but eventually had boy-girl twins (now 21).

I find a large number of prolife activists are involved not for political reasons but spiritual and religious.

They attend vigils, marches, fundraising dinners, Runs for Life, or the recent March on Life, pray for the unborn in public places;  volunteer at counseling centers, which are largely Christian based and thus a “statement of faith” has to be signed.  This means the movement has not broadened its base of support to include our growing non-white population, or even Orthodox Jews who oppose abortion, or the 7 percent of men (4.7 million) and about 11 percent of women (6.7 million) of reproductive age  in the United States, have experienced fertility problems, but would probably like to adopt – but cannot due to the short supply of adoptable infants.

So, is being prolife a religious or spiritual pursuit versus one aimed at achieving substantial changes in policy to protect the unborn?  I would like to see the latter, but the data does not point to much success in curtaining the horrible practice of abortion.