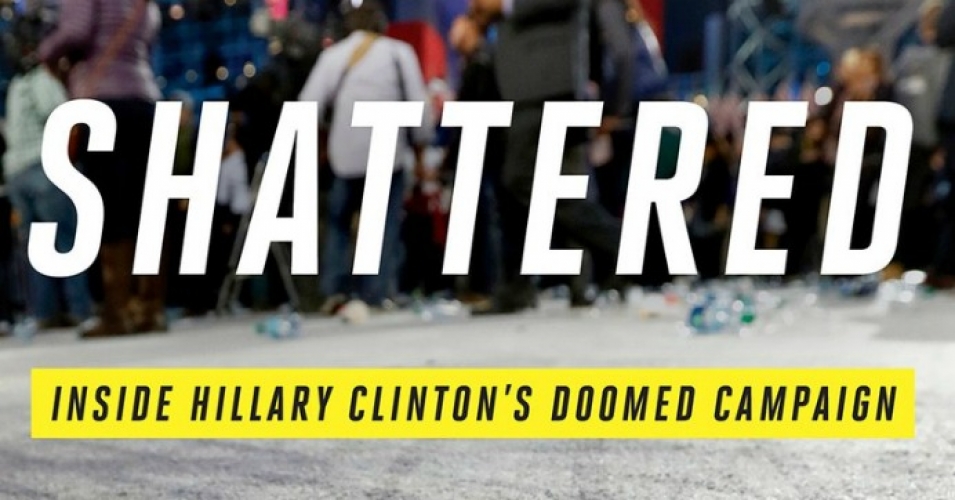 The problem with ‘Shattered’ (and liberals)

For those of you who have not read it yet, Shattered: Inside Hillary Clinton’s doomed campaign, the story of just how Hillary Clinton lost the race in 2016, is a fascinating book, one which takes you moment by moment through the mess which became the Clinton campaign.  Starting before she announced in 2015, through Election night and the aftermath.  Jonathan Allen and Amie Parnes, both of whom are DC insiders, teach the reader everything about the inner workings of the Clinton campaign, and in great detail about how Clinton lost.

No one is spared, not Huma Abedin (Hillary’s designated pit bull either could not or would not properly filter necessary information to her boss the Inevitable President), nor Campaign Manager Robby Mook (who was insistent on using data analysis instead of  traditional polling methods, thus making it impossible for the campaign to see or sense the anger which was boiling in the Republic she wished to govern), to Bill Clinton (who understood how to work an audience well but was no longer in touch with the average Democratic voter), to Hillary herself (shown to be a horrible manager of people, unable to fire incompetent staff, and who had no idea of the country she wished to govern).

However one may feel about Donald Trump or Bernie Sanders each stood for something.  Instead, the Democrats nominated someone who never could articulate why she should be President.

While the book is a great read, the authors operate under two consistent and dangerous flaws.  Flaws that most liberals operate under.  The writers are fully convinced, and say so repeatedly, that Hillary Clinton would be great at governing if she could only get elected” and is probably “the smartest person in any room the moment she walks into it”.

Take the issue with Robby Mook and his insistence on data analysis over traditional polling.  It was very obvious to anyone who lived outside of Manhattan or Washington DC that the average American was boiling mad at the Inside the Beltway Crowd.  However data analysis cannot pick up on such a fact.  All data analysis can do is build a projection of how the voter turnout would look. Not on what voters are thinking.  Approximately a month out, Mook canceled all polling of the race, saying he did not want to spend the money on polling.  The campaign had raised over 1.5 billion dollars, nearly out raising Trump 2-1, and Mook did not want to spend money on polling.  If they had spent money on polling Wisconsin or Michigan or Pennsylvania in the final 2 weeks, they may have seen or heard the voter unrest and saw they were in YUGE trouble.

Instead Team Hillary blindly went along thinking all was fine.  Until it wasn’t.  Can you imagine this type of leadership in the White House during a crisis?  Hiring and keeping around people who are unwilling to admit they have made a mistake? Clinton’s campaign was doomed from the beginning, with 20 people working on her opening speech.  Normally a speech is written by the speechwriter, the candidate, and maybe one other advisor.  Obama speechwriter Jon Favreau signed up to work with team Clinton, but soon got fed up and quit.  Lines of authority were all entangled, so no one could make a decision.

The concept of Hilary being the “smartest person in the room” something the writers say over and over again in interviews, is laughable on its face.  They talk about her being a policy wonk as though it’s the end all and be all of being President.  Knowing about policy is nice and it’s helpful.  But being the President is not knowing all the details of what is in a bill.  It’s about understanding your country, following the Constitution, knowing what to do in critical times.  Being a good manager.  Knowing what to do in a time of crisis.  Who to trust who not to trust.  Hilary’s blind reliance on a completely incompetent Huma proves that she’s not good at governing.  Hilary’s inability to fire incompetent people show she cannot manage an office, much less a bureaucracy.  She did not and would not get to know the Americans she wished to govern.

Knowing policy or having a degree does not make one smart.  Doesn’t matter how educated you are if you’ve been taught mush, or if you can’t learn from history, or if you are incapable of making a decision.  To the contrary, it makes the person in question a fool.  Let’s take this one step further.  The only reason Hillary Clinton won the popular vote was that in the final days of the campaign, her team was afraid she might lose the popular vote, so they went to places like Chicago and New Orleans and California to rallies, to run up the popular vote, when they should have been fixated on Pennsylvania or Minnesota or neighboring states.  Does a person spending time campaigning at a place they are already bound to win sound smart to you?  Some laugh at GW Bush’s or Trump’s not having won the popular vote.  But while Trump or GW may have received less than the popular vote, they received 100% of the Presidency. Something the smartest woman in the room didn’t receive.  This is not a smart person.  To quote Aunt Esther from Sanford and Son, Hillary Clinton is a fish eyed fool. How Clinton lost Michigan and blew the election.

The authors are partially correct – Hillary Clinton is a Shakespearian style tragic figure.  A human disaster with many flaws.  But we should not feel sorry for Hillary.   To the contrary, the readers of Shattered and each of us should drop to our knees and thank God that Hilary was never elected President.   For reasons so perfectly explained in the book.

The problem with ‘Shattered’ (and liberals) was last modified: May 23rd, 2017 by John Massoud

Trump followed up Obama.
Rodney Dangerfield could have won.
Now for Trump to be reelected he will have to stand before America on his merit not blaming others or the amount or R’s in Congress.
Bernie will be back not Hillary.
All of you take noticeto this; Republicans speak out against human trafficking , sexual exploitation of illegal immigrants but NEVER and I do say NEVER speak of Labor exploitation or the illegal employment that lures them here, why?
More Goverment or Less Goverment is not the answer but effective and functional Goverment is the answer.
How can Goverment be effective when the elected only have their hearts in 60%?
We are given our freedom by G_d .
We come together as Christians to write laws to protect us and create and protect a civilized society. When you do not enforce these laws are you uncivilized , not Christian or just plain elected?
Va. Republicans allow Santurary by illegal employment (labor exploitation) in Va. at the expense of her citizens.
So much for States rights when you don’t enforce State laws.
Anyone can armchair Govern it is those who lead 100% and as I have said Republicans are at about 60% .
1) Under our last R Governor http://watchdog.org/202012/subcontractors-shadow-economy
2) Under current D Governor we have
Executive Order 24
Actions are the truth in the tale.

Thanks for raising the issue of how Republicans DESPISE LABOR. They like PROFITS, RENTS, and LAZY MONEY MAKING MANIPULATIONS THAT RISK WORKING PEOPLE’S MONEY AND LIVELIHOODS, not actual productive work. Republicans – at least currently – actually despise working class people … and in their clubs and dinners and parties make fun of them as much as Ms Clinton called them ‘deplorables’. But Republicans call them much nastier names.

They can call me what they want , it doesn’t bother me.
If they want to debate this issue though, I am on the job
where the work is performed.
Often we here some say ; “you can’t find Americans to work”. Some do live in a bubble.
Commerce is the delivery of goods or services offered for a cost.
Running a Business is a challenging task . Hiring, training and yes termination of employment is a large part.
Those who succeed within the law should see the fruit of their labor, NOT those who get elected and turn our Government into their own staffing agency (government commerce?, Corporate welfare?)
Was it Shapiro or Bolling that said ; Republicans gave up on the dinner table for the fine linings of these Commonwealth Club.
Our Va. R Legislators have brought forth to not only protect LEGAL Commerce but to attack it.
SB483 by Senator DeSteph
There are 2 others. Know this electing Ed Gillespie will be counterproductive to job growth in Virginia.
He has no public policy for Employee Misclassification
(JLARC 427 ), He has no public comment on Executive Order 24 . I don’t know if he understands payroll, tax , insurance fraud and illegal Commerce.
Republicans allow the equity built in legal wages and legal commerce to be suckers out by illegal employment for profit , then call it Capitalism.

The smartest person in any room tends to be the self centered know it all whose ideas would be the last on earth to be accepted by everyone else in the room.

Thanks. Now I don’t have to read the book. I question whether Hillary Clinton is the “smartest” person in the room. I never thought she was particularly brilliant. She certainly was terrible at speeches.

Ms Clinton was a bad choice all around and for the time … since we see that many women did not support her, many ‘liberals’ did not support her or support her very well, and the working class failed to come out for her. We have yet to discover if Mr Trump – who is possibly in thrall to Satanic Lord Putin, and may be a Satanic Lord himself/herself/theirself (demonic possession may not have a human gender identity) – was a good choice. Certainly not a good choice for anyone over 55 or over 50 since his budget sends them to DEATH PANELS. Certainly not a good choice for the unborn since his budget sends their mother’s to DEATH PANELS. etc.

If anyone is satanic it was HC. Just wait until the truth comes out about people trafficking and sex with kids among a host of other crimes