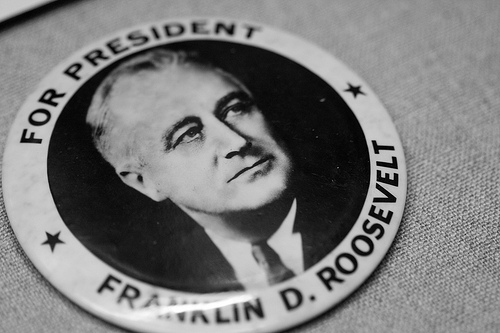 The National Security Agency’s collection of phone metadata of all Americans under the Patriot Act was defended using national security justifications. A substantial number of Americans, however, believe the NSA violated the Fourth Amendment, which protects our security against unreasonable searches and seizures by government.[read_more]

The NSA’s actions have roots in progressive New Deal ideology, with its contempt for the constitutional separation of powers and private property rights. More specifically, this debate is traced to the New Deal-era erosion of the centuries-old rule of law that only judges may issue warrants, and after a showing of probable cause.

In a recent lawsuit filed by FreedomWorks against the NSA’s continued collection of metadata following the sunset of section 215 of the Patriot Act, the Department of Justice responded by citing what’s called the “third-party” doctrine explained in a 1979 case, Smith v. Maryland. This judge-created doctrine seems irreconcilable with the Fourth Amendment even before the NSA’s recent and controversial application of it.

The third-party doctrine stands for the proposition that Americans may not claim Fourth Amendment protections for records created or held by third parties such as banks or phone companies. Although such records are private property, and are even treated as confidential under contractual relationships and some statutes, those records nevertheless have been treated as lacking an “expectation of privacy” under the bizarre third-party doctrine.

Smith v. Maryland compounded flaws from a series of court decisions dating back to the Franklin Delano Roosevelt-Harry Truman Supreme Court. It cites cases that involved grand jury subpoenas for bank and other records of individuals suspected of crimes. Those cases came with intense dissents that such records are private, confidential property requiring stronger Fourth Amendment protections than given by the majorities of the justices in those cases.

But even the majority opinions in those cases used as precedent noted the limiting principle that grand juries are subject to judicial supervision, and noted the historic role of the jury as a “protective bulwark standing solidly between the ordinary citizen and an overzealous prosecutor.”

A 1946 opinion in Oklahoma Press Publishing Co. v. Walling cited in this chain of case law upheld judge-less “administrative subpoenas” issued by bureaucrats. One justice dissented. Citing the Declaration of Independence clause about “sen[ding] hither swarms of officers to harass our people,” and even hinting that judge-less administrative subpoenas approved in that case were the stuff that had previously contributed to “successful revolt,” liberal Democrat Justice Frank Murphy’s dissent warned his Democrat-appointed brethren about the consequences of their dangerous direction.

Murphy was prescient in claiming that judge-less subpoenas and the growth of the administrative state would be a bad mix. He wrote that they could even lead to the undoing of administrative processes. Murphy, an FDR appointee, was also an adamant dissenter in the Korematsu case allowing Japanese civilian detention.

His dissent about judge-less subpoenas is applicable today that “we are too far removed from the experiences of the past to appreciate fully the consequences that may result from an irresponsible though well meaning use of the subpoena power.” He writes:

“To allow a nonjudicial officer, unarmed with judicial process, to demand the books and papers of an individual is an open invitation to abuse of that power. It is no answer that the individual may refuse to produce the material demanded. Many persons have yielded solely because of the air of authority with which the demand is made, a demand that cannot be enforced without subsequent judicial aid. Many invasions of private rights thus occur without the restraining hand of the judiciary ever intervening.”

Murphy concluded: “Only by confining the subpoena power exclusively to the judiciary can there be any insurance against this corrosion of liberty.”

In the matter of the NSA’s relying on the third-party doctrine to collect metadata, there have been passionate arguments on both sides. The NSA, though, expanded the doctrine, which was originally limited to individual suspects, not the entire population.

Warrants are judicial acts, wrote English jurist Sir Matthew Hale in his 1736 “History of Pleas of the Crown,” which influenced the Founders. Opponents of NSA’s metadata collection who may not even know the third-party doctrine’s progressive roots certainly had good instincts to recognize the Fourth Amendment violations.

Originally published in The Washington Examiner.

I always though the historical justification for citizen surveilance was because of Lucius Cornelius Sulla Felix (or Sulla as history as depicted him) marching his armies into Rome in 83 BC and reviving the Roman dictatorship that had been inactive since the Second Punic War, silly me for listening to Robert Byrd and his collection of historical ramblings on the Roman senate from the floor of the US Senate in 1993. Come on, I understand the motivation to place the blame on those evil “progressives” but the plain facts and reality is that these programs in varying forms have been with us since WWII under Republican and Democratic administrations alike. If you really want to find the genesis of the more modern application of these mass data collection programs you don’t need to go back to FDR just to the post 9/11 Bush Administration.

2006 – The Patriot Act is reauthorized and an AT&T technician reveals that the company has let NSA tap into its fiber-optic lines since 2002, enabling the monitoring of the majority of internet and phone traffic in the United States,

2007 – Microsoft becomes the first internet company to work with NSA’s PRISM program, giving it the ability to collect data on search history, email, file transfers and live chats followed by Google, Facebook, Yahoo and others,

2008 – Bush signs the FISA Amendments Act retroactively codifing warrantless wiretapping programs and requiring telecoms and internet firms to give the government access to private communications if one party is “reasonably believed” to be outside the US while granting retroactive immunity for handing over these customers’ private data without a warrant.

You might notice this was all done without a progressive within sight of the WH entrance and with no reliance on any of the precedents discussed above as far as I can tell. The evil progressive rational just doesn’t hold water although post 2009 they HAVE been perfectly willing to continue the “good work” started by the Bush Administration.