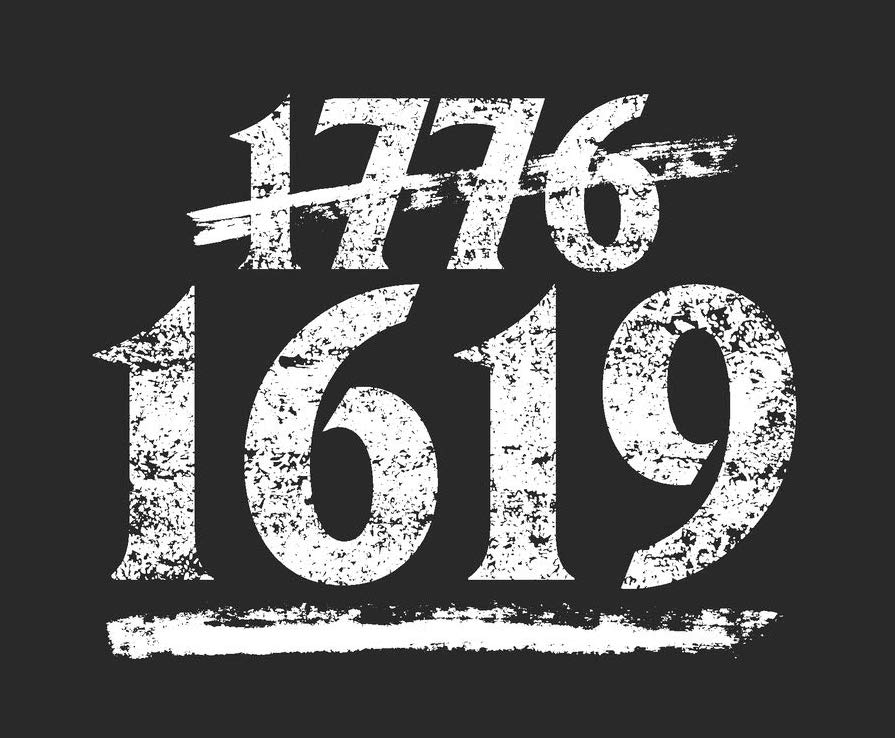 Undoubtedly manyÂ  have heard of the 1619 Project which was started as Â long-form journalismÂ project byÂ Nikole Hannah-Jones, writers fromÂ The New York Times, andÂ The New York Times Magazine. This effort “aims to reframe the country’s history by placing the consequences ofÂ slaveryÂ and the contributions ofÂ Black AmericansÂ at the very center ofÂ the United States‘ national narrative.â€

The â€œProjectâ€ was launched in August 2019 to commemorate the 400th anniversary of the â€œfirst enslaved Africans arriving inÂ colonial Virginia.â€ Â In 1619, a group of about twenty captive AfricansÂ did arrive in theÂ Virginia Colony.Â  AÂ Dutch-operated privateer,Â White Lion, carried the 20â€“30 Africans who had been captured by a joint African-Portuguese raidÂ against theÂ Kingdom of NdongoÂ in modern-dayÂ Angola, making its landing atÂ Point ComfortÂ in the EnglishÂ colony of Virginia.Â

Although the 1619 Project places this event as the genesis of slavery in the colonial history of the United States, many historians have taken issue with this claim questioning whether those 1619 arrivals actually became slaves. With no slave laws in place, they were treated as indentured servants and given the same opportunities as whites. Other historians have pointed out that slavery in North America existed well prior to 1619,Â and that Spanish sanctioned slavery in the New World is documented to have existed as far back a 1494 â€“ well before 1619!Â

In its lead essay, written by activist Nicole Hannah-Jones, falsifies important parts of American history with a view to engineering this new approach. While it has been roundly debunked by a chorus of renowned academics for gross factual and thematic inaccuracies, its most outlandish claim is that the American Revolution was fought to protect slavery. The preeminent historian of the American Revolution, Gordon Wood, points out that he does not know â€œof any colonist who said that they wanted independence in order to preserve their slaves.â€ Nor does anyone else. There is no historical record.

For at least a generation, many colleges and universities have taught students that America fundamentally is a white supremacist regime in need of deconstruction. By offering an accompanying  school curriculum, the 1619 Project explicitly targets middle- and high-schoolers, so far largely untouched by this propaganda. But since the 1619 Projectâ€™s publication last August, tens of thousands of students in all 50 states have been taught parts of its curriculum.

The overriding lesson is clear: young people must learn to despise their nationâ€”its Constitution, ideals, economic system, and its Founders. They must resent and reject their past; possess an aggressive, contemptuous, and disobedient attitude toward the present; and strive forcefully to create a triumphant future where the enemies of old are punished, and the innocent finally rule. Teaching young people that they have no country, that there is neither God nor justice, but only their own anger to right wrongs leads not to civilized self-rule, but to fanaticism and self-destruction.

Hannah-Jones has spoken openly about the projectâ€™s second goal: â€œWhen my editor asks me, like, whatâ€™s your ultimate goal for the project, my ultimate goal is that thereâ€™ll be a reparations bill passed.â€

In other words, as Americans learn to despise their country and their fellow citizens, they should demand a moral buyout, where moral debts are settled in cash. Of course, remaining unanswered is what will happen when neither equality nor moral wholeness emerges as a result of cash transfers?

But the real goal of the project, as Hannah-Jones explains, is to get â€œwhite people to give up whiteness.â€ This statement appears opaque at first but follows the unmistakable logic of identity politics. Getting rid of â€œwhitenessâ€ means that whites must stop thinking of themselves as a group. To accomplish this, they must learn (or be compelled) to practice unreflective deference to the morally innocentâ€”the marginalized. This means #believingher without facts or taking the victimâ€™s self-styled narrative (like the 1619 Project) as sacred and beyond rational scrutiny. As â€œwhitenessâ€ dissolves, however, all other marginalized groups must adhere even more strongly to their own group identities.

Since this final goal will surely require more than just propaganda, Hannah-Jones settles for reparations as a second-best arrangement. Obtaining reparations, after all, is â€œmore realistic than, like, can we get white Americans to stop being white,â€ she notes. Nevertheless, Hannah-Jones seems to think that both reparations and the dissolution of whiteness should be attempted, even if neither is likely to occur.

Americaâ€™s liberal elites, represented by and educated in the moral fashions of theÂ Times, are remarkably short-sighted. It is not difficult to see that a new spirit of vengeance created by such â€œjournalismâ€ will lead neither to political stability nor to justice. Nor is it difficult to see why mainstream journalism has rightly fallen out of public favor.

The Real Goals of â€œThe 1619 Projectâ€ was last modified: May 26th, 2021 by Guest Contributor James Poplar