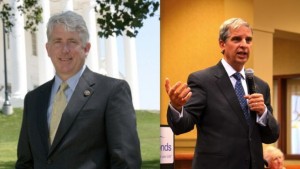 The 2013 state-wide campaign is in full swing, and we are hearing the same thing we did last year. Win Loudoun and Prince William, and we win it all. I suppose that’s true and it makes it extremely serendipitous the Democrat Party has nominated Mark Herring for Attorney General.

Herring is a very gifted politician (and frankly a nice guy). He has made a career out of convincing business leaders, independents and even some moderate Republicans that he is a moderate Democrat. For example, he was the first member of the General Assembly that I am aware of to champion the cause of outlawing synthetic marijuana. He got a ton of press on that in Loudoun County and it made him look tough on crime.

Herring’s campaign is following the modern Democrat playbook in purple states like Virginia which essentially is be pro-choice and pro-gay but fiscally conservative. Herring does a good job executing this strategy but if you really examine his record (which is scant at best), Herring is a classic liberal Democrat and a classic politician. The more he is forced to campaign though, the more this is becoming more readily apparent to voters outside Loudoun County. People are starting to wake up and see the real Mark Herring.

One of the best examples of the real Mark Herring is his record on taxes. As a strong opponent of regressive taxation, especially a meals tax, I find found it very appalling when Herring reversed himself on the issue of a meals tax after making one of his signature political moves, i.e. being a liberal in moderate’s clothing. On January 5, 2012 Herring issued a statement to the press and on his website condemning the Loudoun County Board of Supervisors’ vote to request the Loudoun General Assembly delegation to seek legislation to grant the Board the authority to impose a meals tax in Loudoun County. Many Republicans like me were very upset that five members of the Republican-controlled Board would even be thinking about a meals tax which is opposed by business leaders and organizations including the very influential Loudoun County Chamber of Commerce. At the time I was struck by Herring’s statement to the press as a shrewd political move that fed the image that Mr. Herring was a moderate Democrat. As one of his constituents I was glad that my Senator appeared reliable on opposing a meals tax, however, as a “high information voter” it seemed to me something was up.

Herring had somewhat of a change of heart (sarcasm) on this issue a little over a year later. Senate Bill 1311 was introduced in the Virginia Senate in the 2013 session and the legislation’s purpose was to give additional local governments in the Commonwealth the authority to impose a meals tax on their citizens. SB 1311 passed by a vote of 23-17, and joining this list of 23 Senators voting to impose this regressive tax he once opposed was Loudoun’s Senator Mark Herring. In other words, after attacking the Loudoun Board of Supervisors and emphatically stating he would refuse support meals tax authority legislation, Herring did exactly what he said he would not do.

The problem is no one really noticed, the media said nothing and but for my letter to the editor on the subject, no one would have mentioned a thing. The result, Herring looks like he is strong on taxes locally when in fact he is a classic liberal who supports job killing tax increases like a meals tax.

Another good example of the real Mark Herring is his willingness to help the special interests who support his campaign. Senate Bill 797 introduced by a Republican Senator in the 2013 session would have stopped utility companies from installing a “Smart Meter” on private property or requiring that one be installed unless the customer requested it. Smart Meters transmit a customer’s utility usage constantly to power companies, and many people think they are a huge invasion of privacy. They are also a potential safety hazard and have been alleged to have caused fires in homes by exploding. There are also health concerns from the radiation they emit.

SB 797 was killed by Herring and his colleagues in the Senate Commerce and Labor Committee. Herring was part the majority that voted to “pass by” the Bill indefinitely which effectively killed the Bill. A true moderate would have given citizens a choice in whether to install these controversial devices on their property, and considering Herring’s record of supporting Republican ideals at times, I would have thought he would be in favor of this Bill.

However, Herring’s strategy of looking like a moderate ends where the money begins. His vote on SB 797 could have been an opportunity to stand for the liberty and the private property rights of his constituents, but instead Herring instead stood for big corporations. The reason is clear – it helped him raise money for his Senate campaign committee. If you look at his VPAP record, he took big donations from Dominion (the power company), Appalachian Power Co. and the Nova Electrical Cooperative. It seems no coincidence that Herring voted to kill the Smart Meter bill and receives thousands of dollars in campaign contributions from power companies.

Finally, the real Mark Herring is apparent in the way he is campaigning on so-called “women’s issues.” The strategy of Barack Obama in 2012 and the state-wide Democrat candidates this year is to widen the gender gap with Republicans by campaigning hard on abortion and contraception and calling anyone who has had the audacity to be pro-life an “extremist.” Never mind the fact that millions of Virginians are also pro-life (are they extremists Senator?). I find this strategy unfortunately effective but as the father of two girls with one on the way, I also find it very, very demeaning to women.

Frankly, I find it offensive that President Obama, Herring and his ticket-mates believe that “women’s issues” consist of nothing but reproductive rights and that in order to win votes from women they have to talk about nothing but contraception.

Does Herring really think a working mom sitting in traffic in his district (because he has done nothing about gridlock on Route 7) is thinking about abortion, abortion, abortion? Does Herring think a stay-at-home mom in his district who drives 15 minutes to go one mile to drive her kids to school (again because he has done nothing for roads) is thinking about whether Ken Cuccinelli and Mark Obenshain want to take her birth control pills? Is a single woman just out of college who is struggling to find a job in Obama’s economy focusing on E.W. Jackson’s “extreme” views that late-term abortion is wrong?

The answer to these questions is of course no, and Republicans like myself give women a whole lot more credit than that. “Women’s issues” are the same issues that men care about. Family, traffic, education, taxes, jobs, the economy, etc. To pigeon-hole women into a category where Herring claims all they care about is contraception is not only ridiculous, it is demeaning.

Look, Mark Herring is a very nice guy and a good lawyer. I am sure he is also a very good family man. His political strategy though, is very transparent and his record in the Senate and his 2013 campaign illustrate he is a liberal Democrat in every sense of the phrase. It is highly unlikely he will be the next Attorney General when voters get to know the real Mark Herring.

John Whitbeck is Chairman of the 10th district for the Republican Party of Virginia.