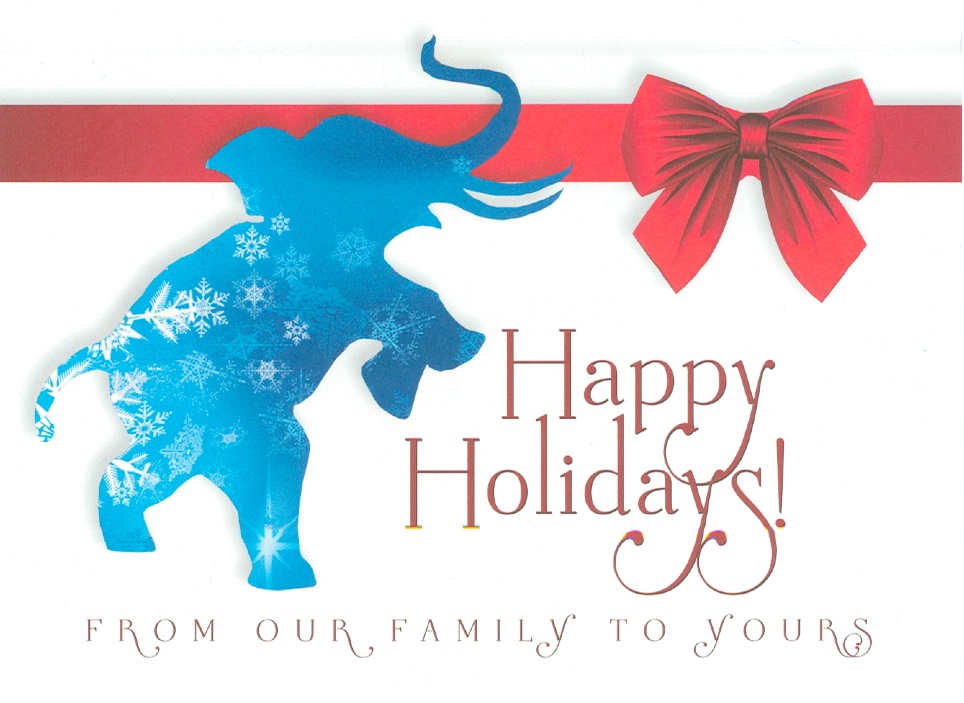 The Republican Party at Christmas

President-Elect Donald Trump has been busy placing some very good people in some very important positions in his administration. This communicates to me that many of his campaign promises with regard to the management of the executive branch of The United States government will likely come to pass. People are Policy.

However, what are we to make of Trump’s 1 Trillion Dollar Infrastructure plan? Were this a Democrat President Elect, conservatives would be loudly opposing it. There could even be some gnashing of teeth. Soon to be Senate Minority Leader Chuck Schumer seems pleased. So, it appears that the Trump Presidency is going to be the mixed bag we thought it would be. We’ll be careful to praise the accomplishments, of which I am certain there will be many, and to highlight the deficiencies; again, of which I’m certain there will be many.

In the meantime, the Republican Party has to deal with high expectations for the new leader of the Party. Cooperation between President Trump and the Republican Congress will be a high priority. However, conservatives within the Party will want to fight against aggressive tariffs and massive spending boondoggles. Republican Party politics will be a tight rope walk over the Grand Canyon.

In Virginia, the first year of Trump’s Presidency will be a massive statewide election year; as we get set to elect a new Governor, Lt. Governor, and Attorney General, as well as attempt to protect our Republican Majority in the legislature. There’s no time to get distracted by Washington D.C. politics and posturing; the battle for the Commonwealth begins now. On January 10th, there is a special election for the 9th District State Senate seat, featuring a Richmond-Machine Democrat who thinks the seat already belongs to her.

Divisive fissures have already erupted within the party as liberal white-identity politics people, aroused by the Trump campaign and his anti-free trade, anti-China, anti-NATO, anti-immigrant rhetoric, attempt to gain a seat at the table.

Conservatives are still waiting for someone to speak to their issues and energize the base. Ed Gillespie has reached out to conservative and TEA Party leaders across the Commonwealth, acquiring a wealth of “important” endorsements. Gillespie’s most important endorsement comes from his new campaign chairman, Pete Snyder. Ed Gillespie has been listening to conservatives across Virginia for the last two years and seems poised to unleash a powerful campaign to unite the party. Yet, many conservatives aren’t convinced that Gillespie is their guy; their skepticism, a result of nothing more sinister than Mr. Gillespie’s resume. Thousands are waiting, hoping for a more exciting alternative and they all seem to have two words on the tips of their tongues: Denver Riggleman.

Delegate Rob Bell dropped out of the Attorney General race, leaving liberty-candidate John Adams as the popular choice poised to unite the majority of the Republican Party. State Senators Jill Vogel and Bryce Reeves are battling for endorsements and donations. RPV seems confident (to me anyway) that whoever represents the party in November will represent the party well.

Let us not get distracted. We Republicans spend the vast majority of our time fighting with one another. We cannot forget that once we have our nominees, there will be Democrat nominees, well-financed and backed by powerful special interests. Democrats are already laser-focused on stealing 11 seats from Republicans in Richmond.

This is the state of the Republican Party in Virginia this Christmas. Enjoy the holiday season with your families. Celebrate the birth of our Lord and Savior Jesus Christ. Celebrate Hanukkah. Bring in the New Year responsibly and enjoy those resolutions while they last.

But do not doubt, we have business at hand come January 1st. The first election of 2017 takes place on January 10th. We have honest to God internal disagreements we’ll all have to work out. Most of all, we have Democrats to defeat. It’s time to put the war paint on, to gear up, and to get ready to play ball. It starts now.

…Thousands are waiting, hoping for a more exciting alternative and they all seem to have two words on the tips of their tongues: Denver Riggleman.

Dear God, I sadly think that you actually believe that.

Haven’t had this much excitement since the toaster fell into the bathtub.

What special interest elitist paid you to write this? How about releasing your tax return next year?

You despise populists, correct? Do you really think there are elitists reading this propaganda?

That southern spokesman for the democrat party seems pretty elite.

Is there no end to your cynicism and anger?

Yes, let’s twist the argument and personalize it — Alinsky enough for everybody.

When the party begins to be consistently conservative and principled, then we can think about putting down the feces cannon.

In the meantime, responsible essayists should declare their encampment, pieces of silver, and patrons. (Not counting the periodic TBE Oprah-like ‘Favorite Things’ giveaways.)

wow, at some point you may want to step away from the ol’ word processor. Go for a walk, get some fresh air, meet a girl, (or a guy, I’m pretty lax about that kind of thing) whatever, but you need an intervention or an invitation out of cyberworld. You’ve been waxing poetic ad nauseum some variant of “the state of the Republican party” since the election.

The notion that the Republican Party is a bastion of conservative thought, ideology, or action is gone and not coming back in the foreseeable future, no may how much you may pine for it,

Any recommendations? Family members? My Big Fat Greek Wedding may have been fate, but some people need help. Was there a fact here that made you cry into a pillow? or Teddy Bear? Or Binky?

not particularly, more of the pencil in the eye variety after reading another variation of what the Republican Party is or isn’t, should or shouldn’t be in your bubble.

And hell no, I’ll save you the aggravation. My family is what you may call “special”

Come to Loudoun, we have quite the grab bag and we can certainly find a juggalette to temper the elitist edge.

It’s like a twisted ‘conservative’ elite radio Havana ‘The war is over for you, why struggle so…’

It’s fun to play ‘spot the bias’ and how Stephen wants you to think in Potemkin Party Politics.

This use to be the blog of regular contributors like Paul Prados, what a long, long way it has fallen. Sometimes having “more” say less is much better then having a “few” say more, especially if it’s the same topic over and over again. Universities aren’t very focused much any more on drawing the distinction between propagandistic wish fulfillment vs information content so sometimes it’s not always just to blame the individual. The inability to listen, well that is a personality characteristic, I’m afraid.

The world is changing politically and TBE is being left behind to clean up after the elephants since the parade is long over and most people have moved on to that fact and are looking to the future and reasonable discussions on what expectations it will produce for them economically and culturally. The one amusing thing is the conservatism many of these clingers rant on about and were NEVER able to deliver in any form or manner in either policy changes or social/cultural re-adjustments are currently being put in play by the very political process they don’t grasp or understand nor are willing to readily accept.

That leaves one to ask themselves in my opinion – if you are unhappy in the midst of accomplishing many of your supposedly heart felt political desires and are still complaining, what is it you really wanted in the first place? Something tells me being on “top” is far more important to these individuals then actually receiving these political desires for the common voter. Remind you of anyone?

One of the unfortunate side effects of running for and obtaining party office is the reduction in my contribution here.

By my count we have twelve regular contributors with posting privileges. A majority of them are party officials (we are paid in criticism) or work directly for (or are) candidates (at least they get paid). I wish we all had more time to address party actions, candidates, and the opposition.

Perhaps SBT needs to find a new topic to cover, but at least he is posting.

On a final note to the naysayers. If there is a place for conservative thought to take hold it is in the Republican party. I’m not giving up.

No, Tucker is not allowed to talk about communist China, Mexico, Russia, or anything important regarding jobs or economy, or how to fix healthcare. And no way he is going to address money and corruption in our government.

“They” would cut off his paychecks.

Highest point was the link within the Quote to the Man from Piety Hill!

I’ve never given up in over fifty years on the traditions and positions of American conservatism but I have to admit I have largely dismissed this far right wing social conservative version of it pushed by a small clique here in Virginia as “the conservative model for the state” as not only generally politically and culturally intolerant and at times policy incoherent but very focused on the management of power rather then then the delivery of results.

It has far more in common with the Democratic model of progressive governance then any conservative approach I’ve been acquainted with over many years following politics. This is clearly a personal opinion (and I don’t ask anyone to follow or agree with it) but I would make the observation that it appears to me the vast majority of Virginia voters who identify themselves as conservatives do so by the abject failure these individuals continue to deliver year after year at the ballot box regarding their hot button policies and their supported candidates. This approach has politically failed the state and it’s time to move on to a future that does not involve perpetual minority party status and Democratic party control of the state’s political apparatus. These individuals simply put have no answers.

Obsession with candidates has been a real problem, but only because everyone stops paying attention between elections. Once people lose a primary they get mad and stay home. Democrats have (or had) a unified party.

Republicans will never be unified because we don’t represent anything other than a collective opposition to Democrats. The best we can hope for is a majority opinion and that’s what everyone fights over.