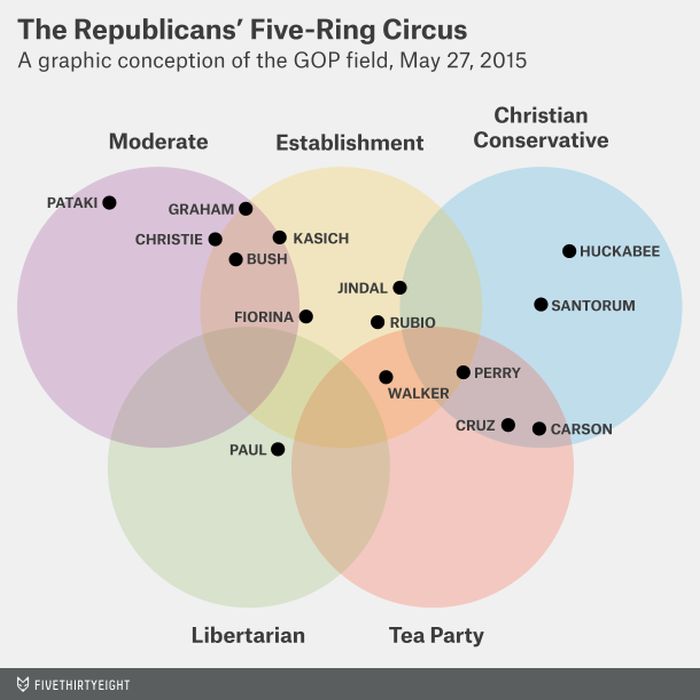 The folks over at Fivethirtyeight have put together this handy chart showing a simplfied version of where on the political spectrum our Presidential candidates lie. It would appear that Governor Perry has the most overlap. [read_more]

I am not a Romney fan. However, there is no one there who is as electable as Mitt Romney was. Walker may be the closest. I just do not see anyone else there who is electable. The media will work it for all the money they can milk out of it. But in the end the Koch’s boy Walker looks to come out on top, unless he has unknown baggage.

Fiorina is just in it because she is a woman, and can follow Hillary around and say the things a man can’t about Hillary.

If Hillary keeps her mouth shut, she will be hard to beat.

No matter who wins, we are in trouble.

First, a disclaimer, I am a fan of Rand Paul …

I think you’re wrong that nobody is as electable as Romney was. I watched CSPAN on Sunday night when McConnell, McCain, and others were bristling because Rand Paul was going to force a law to expire, and they were not pulling punches, they really were angry about it. What surprised me, however, was the call in lines after the session went quiet before the final preparations for Monday’s sessions, overwhelmingly people were calling in supporting Rand Paul. I don’t mean Rand Paul supporters, I mean every day Republicans, and almost every Democrat that called in on the Democrat line, there were at least four self-identifying Democrats who called in and said they were going to vote for Rand Paul instead of Hillary Clinton, and at least two said that Republicans would be stupid not to support Rand Paul. It’s right there online, go back and watch the entire broadcast and see for yourself. It was so overwhelmingly in support of Rand Paul that one Democratic activist actually called in to admonish people in her own party trying to “remind them” that if they vote for Rand Paul they aren’t just voting for his views on privacy, they’re voting for “everything else”, which she left vague and undefined like a monster hiding under the bed.

Rand Paul may not have a lot of the traditional GOP vote wrapped up, but he has a huge number of cross-over voters, independents, and others. Remember, this is the guy who got a standing ovation at UC Berkeley, something no other Republican candidate in this race would be able to pull off. It’s exactly the things that make him disagreeable to a large number of GOP traditionalists that makes him appealing to a lot of other people, and there’s a reason he’s been tied with Hillary Clinton in a number of polls. I mean this is a guy who says outright that “of course” he believes in evolution, that its just one of the ways that God works, which is what a LOT of regular people in this world believe.

Paul’s problem isn’t that he is unelectable, he’s MORE electable than Romney was … Paul’s problem is that he probably doesn’t have enough votes to win a Republican primary because so many establishment Republicans can’t stand him.

Large and I’m sure heartfelt “pipedream” that Rand Paul will pull any significant independent vote and outright delusional that he will effect any more then a few fringe Democratic crossovers. What success he will have will be much like his father in a few possible primaries with a past core libertarian turnout. There is no way he would ever match the 2012 popular vote count of Mitt Romney in a nationwide general election. I realize he is selling this line but the polls just don’t bear out the position. On top of that he has rather serious money problems in a 2016 national election that will break all records in funds spent. Sorry, but the ganja vote isn’t going to put him anywhere near the oval office in 2017.

So, do you also believe that no candidate so far is as electable as Romney? I still believe that Romney may be drafted in the end.

You are also right, just who or what would finance Rand?

If Romney is drafted when we have so many good candidates running, our party has given up and we will see 8 years of the Clintons back in the White House.

if Hillary has no major discernible health issues, she’s gonna be hard to beat. the email issue is raising her negatives, but with whom? people who know what is going on? not many of those out there

Health issues? If she has any they will be kept buried.

Your last statement is absolutely correct.
We are in deep deep deep trouble.
Three Ring Circus , yes.
There are cattle farmers and then there are goat ropers posing as cattle farmers.

Walker is def the favorite going into the clubhouse