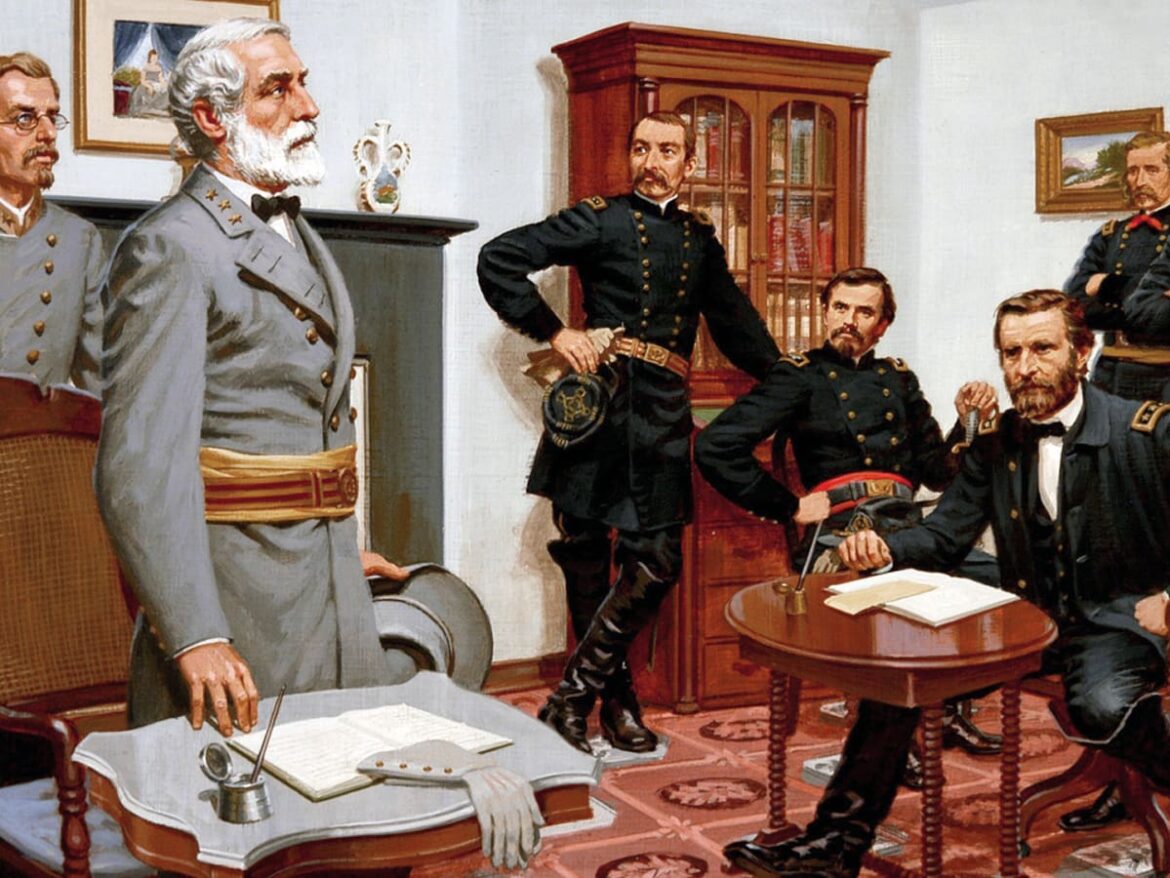 Few things in life reveal more clearly the true character of a man than his response to the circumstances of defeat and failure. The deepest impulses of the soul emerge when cherished hopes collapse and undertakings of much labor, sacrifice, and suffering end in ruin. All of this we see in Robert E. Lee at his surrender of the Army of Northern Virginia at Appomattox in April of 1865.

Given the severely reduced and depleted state of Lee’s Army of Northern Virginia by April 1865, and short of the useless sacrifice of this remnant of faithful veterans in a defiant last stand against Grant, Lee saw no option but that of surrendering the army. This exigency of circumstances, however, did not put Lee under the necessity of making peace.

On the eve of Lee’s meeting with Grant at the McLean house near Farmville, Virginia, Gen. E. Porter Alexander, Lee’s Chief of Artillery and one of his most gifted officers, passionately implored him to order the army to “scatter in the woods & bushes & either to rally upon Gen. Johnston in North Carolina, or to make their way, each man to his own state, with arms, & to support his governor,” rather than to surrender, arguing to Lee that “the men that have fought under you for four years have got the right to ask you to spare us the mortification of having you ask Grant for terms. . . .”

Alexander writes of himself in this heated appeal that, “Usually I stood very much in awe of Gen. Lee but now I was wrought up & words came to me as never before. And as I made my points they seemed to me unanswerable. . . . He [Lee] had listened very patiently until I finished & and then he said, ‘If I took your suggestion & ordered the army to disperse how many do you suppose would get away?’ I answered: ‘Two thirds of us, I think would get away.’

Lee’s ensuing response to this interplay of youthful impetuosity and seasoned wisdom, as recorded by Gen. Alexander, was as follows.

There are here [at Appomattox] only about 15,000 men with muskets. Suppose two thirds, say 10,000, got away. Divided among the states their numbers would be too insignificant to accomplish the least good. Yes! The surrender of this army is the end of the Confederacy. As for foreign help I’ve never believed we could gain our independence except by our own arms. If I ordered the men to go to Gen. Johnston, few would go. Their homes have been overrun by the enemy & their families need them badly. We have now simply to look the fact in the face that the Confederacy has failed.

And as Christian men, Gen. Alexander, you & I have no right to think for one moment of our personal feelings or affairs. We must consider only the effect which our action will have upon the country at large.

Suppose I should take your suggestion & order the army to disperse & make their way to their homes. The men would have no rations & they would be under no discipline. They are already demoralized by four years of war. They would have to plunder & rob to procure subsistence. The country would be full of lawless bands in every part, & a state of society would ensue from which it would take the country years to recover. Then the enemy’s cavalry would pursue in the hopes of catching the principal officers, & wherever they went there would be fresh rapine and destruction.

And as for myself, while you young men might afford to go on bushwhacking, the only proper & dignified course for me would be to surrender myself & and take the consequences of my actions.

But it is still early in the spring, & if the men can be quietly & quickly returned to their homes there is time to plant crops & begin to repair the ravages of war.
That is what I must now try to bring about. I expect to meet Gen. Grant at ten this morning in rear of the army & surrender this army to him.

Alexander was abashed at this response from Lee, writing that “. . . I had never half known before what a big heart & brain our general had. I was so ashamed of having proposed to him such a foolish and wild cat scheme as my suggestion had been that I felt like begging him to forget that he ever heard it. . . . It seemed now an inestimable privilege to serve under him to the very last moment, & that no scene in the whole life of the Army of Northern Virginia would be more honorable than the one which was now to close its record.”

In Lee’s statement to Alexander, we find united all the essential elements of his character and abilities: the engineer’s penchant for realism and practicality, penetration of insight, clarity of thought, accuracy of judgment, personal self-denial, and an overriding consideration for the welfare of others. At Appomattox Lee refused a continuance of war, although he knew that the sentiments of the warring parties remained largely at odds on the issues that had spawned the armed conflict and was undoubtedly aware that the ravages of that conflict had inflamed feelings of yet greater bitterness and acrimony. Notwithstanding, these daunting circumstances, however, we see at Appomattox the emergence of Lee as peacemaker, and in his words to Alexander the seeds of commitment to apply the influence and example of his post-war life to the healing and reconciliation of the exhausted and war-torn nation.

The relatively brief surrender formalities at the McLean house on April 9, 1865, were conducted with dignity and respect. Lee reported to Grant with truthful candor the numbers and condition of his army, as far as he knew them. And in everlasting testament to the fundamental goodness of Grant, he made every effort to spare Lee humiliation or aggravation of the pain he knew he must feel at being compelled to surrender an army that had fought so long and so valiantly.

To this end, Grant’s terms were that Lee’s men be paroled to go to their homes (not marched off to prison), that Confederate officers be allowed to keep their side arms, and that those of Lee’s men who owned their own horses be permitted to keep them, adding the unsolicited offer to send over to Lee’s famished army 25,000 rations from Union stocks, a gesture that drew Lee’s warm appreciation.

As Lee departed the conference and walked out onto the McLean house porch, the Union officers standing there respectfully saluted him, with Lee returning their salutes as he called for his horse for the tearful ride through his men to tell them they had been surrendered and were now free to go home after four long years of arduous struggle. The whole tone and tenor of the Appomattox surrender, thanks to both Grant and Lee, was a “Great American Moment,” of a sort too seldom repeated on the world stage in any age. Grant had been generous and kind, and Lee had chosen peace over a protracted guerilla war that could have rendered the yet young American republic a failed experiment.

Today, as was the nation in April of 1865, Washington and Lee University has been torn for several years by strife between two factions of the community: one desiring to retain the historical traditions and values of the school as well as the reputations of its namesakes, from whose influence and example much of that tradition was derived; and the other, seeing those traditions and values as obstructive to the furtherance of the greater diversity and inclusion required in modern America, where even yet the scars of slavery still linger in some corners of society. This disparity of views will not be soon ended, but the current war of words and actions must be, and moves toward compromise and mutual accommodation made, as in the recently offered, eminently workable and practical proposals by TGR’s Neely Young (in advising of ways to increase diversity of political and cultural views on campus) and Rex Woodridge (in

proposing a new, modern back-campus general meeting venue and university museum site, inoffensive to all, advantageous to all, and allowing for the Chapel to retain the name, Lee Chapel, and the recumbent Lee statue not to be walled off from the Chapel sanctuary).

Lee, who conceived and erected the Chapel during his presidency of Washington College, never intended, nor ever would have allowed, it to become — as is alleged by some to be the case today — a Confederate memorial, a symbol of the Lost Cause, a rallying point for the latter day, die-hard Confederates, or for modern day racists. It was meant to be a place of worship and a meeting venue suitable for other campus functions. As much as the equestrian statues of Lee at Gettysburg and on Richmond’s Monument Avenue (the latter recently removed) symbolize Lee the Warrior, Lee Chapel symbolizes Lee the Peacemaker and Reconciler, the Lee of Appomattox, the man who assumed the presidency of Washington College in 1865 and led it to renown and prosperity in the ensuing five years of his tenure.

We earnestly call upon the Washington and Lee Administration and Board of Trustees to accept our overtures of compromise, that once again Lee Chapel might face Washington Hall across the Colonnade’s front lawn in peace and in a symmetry of names shared with that of their juxtaposition in the name of the university itself, and that neither the proud statue of “Ole George” atop Washington Hall nor that of Lee in the Chapel be disgracefully shrouded from view. In the spirit of Appomattox, Washington and Lee forever!

This column has been republished with permission from The Generals Redoubt.

Marse Robert will forever be the very epitome of grace and dignity we expect of our military officers. Would that the “wokesters” in our current general ranks had been properly educated to comprehend his stature and deportment.