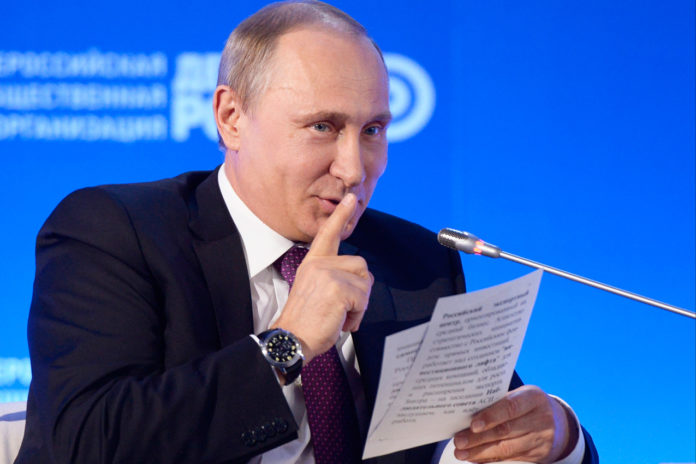 Back in 1984 when I was a newly commissioned Second Lieutenant at the U.S. Armyâ€™s Intelligence School at Fort Huachuca, my classmates and I were taught the importance of seeing the world through the eyes of our adversaries. Â For most of us, our main adversary was the Soviet Union. Â This challenge was easier for me since I had spent the previous seven years in the Army as a Russian linguist participating in highly classified intelligence operations. Â Several years later, I was accepted into the Post Graduate Intelligence Program (PGIP) at the Defense Intelligence Agency (DIA) and earned a Masters Degree in Russian Foreign Area studies. Â As a result, I know much more about Russia than the average American â€“ even more than most know-it-all political pundits. Â Â Â Â

At the outbreak of World War 2, Winston Churchill said, â€œI cannot forecast to you the action of Russia. It is a riddle wrapped in a mystery inside an enigma; but perhaps there is a key. That key is Russian national interest.â€

The most interesting course I took in PGIP was â€œSources of Russian Conduct,â€ which provided key insights into Russian behavior and national interests â€“ past, present, and future. Â

The first thing to understand about Russians is that they are products of geography and victims of history. Â With no Gulf Stream to modify the bone-chilling Artic blasts, the Russian climate is considerably colder than that of Western Europe. Â Furthermore, the Romans did not conquer Russia and thus did not build a transportation system there as they had done in western Europe. Â As a result, medieval Russians were stuck with primitive roads, isolated villages, and an unforgiving climate. Â Therefore, they clung to traditions and survival techniques that worked for them, leaving no room for the innovative agricultural techniques characteristic of Western Europe made possible by mild winters and good roads. Â

Much of European Russia is situated on a great plain, leaving only rivers as natural barriers to protect against invaders. Â As a result, Russia has been invaded repeatedly since the time of its founding in the 9th century by Viking colonizers. Â And no less than 10 of those invasions have come from the West. Â In chronological order they are Vikings, Poles, Swedes, Teutonic Knights, Poles again, Swedes again, Napoleon, the Kaiser, the Poles yet again, and of course, the Nazis. Â To give one an idea of the genocidal devastation unleashed by the Nazis, 80% of all Russian men born in 1923 were dead by 1945. Â In return, the Russians killed far more German soldiers than the western Allies, doing more to defeat Nazi Germany than anyone else. Â

All of this is not to say that the Russians are angels, as they have done their fair share of invasion and colonization. Â But given this history of one invasion after another, one can see why Russians are paranoid about security, and how wary Moscow is of the looming encirclement by NATO forces and bases, particularly should Ukraine enter NATO. Â Russian nationalists and revisionists not only fear threats from abroad, but from within as well. Â Many Russians today view even the establishment of the Soviet Union as a power grab by Russian Jews, who as Vladimir Putin recently revealed, formed the majority of the first Soviet government https://www.youtube.com/watch?v=-pDtgWUtdUM . Â

Putin is very favorably viewed by regular Russians, who believe he was instrumental in saving the country from total domination by the so-called Russian oligarchs, the vast majority of whom were not ethnically Russian. Â These oligarchs were seen as tools for global financial elites to plunder and rob Russia of its rich natural resources and enslave the Russian government and people to the powerful central banks of Europe and America. Â Knowing their history well, and very aware of their lagging behind the West in terms of technological advances and affluences,Â Russians see the need for a powerful, authoritarian ruler, such as Putin to protect them from invasion and intervention, rather than the federalist systems in the West which depend on power sharing. Â Knowing this background information on Russia, one can come to understand the reasons behind Russian attempts to sabotage the campaign of Hillary Clinton, which I will discuss in Part Two.

[…] the previous installment I discussed why Russians are justifiably concerned with foreign threats and interventions, listing […]

Let us not forget the young man who said that he was the one that published the info from the DNC server(s), for which he received a bunch of bullets in the back.

Good information, provocative and prudent. Usually where there is smoke, there is fire. Always look to who benefits. Good piece.

The Russians did not sabatoge the election of Hillary Clinton. She did it to herself.

Then why do you think the Russians hacked the DNC emails and released them when they did, if not for wishing to sabotage Mrs. Clinton?

Actually, Wikileaks has said for that umpteenth time that Russia had nothing to do with the leaks. The left has pushed an agenda not the truth here.

Correlation is not causation if I remember my probability studies.

The basic problem we have now is that any distinction or denial is no longer relevant – far too many people believe that Putin did it. With the incessant propaganda of Russia, Russia, Russia and Putin, Putin, Putin, appearance becomes reality and proof is no longer needed or demanded. Thus, no cause has been proven but Russia has been branded because they would “like to damage” America.

It is all too convenient for the CIA to hide behind classification of intelligence and pass stuff to the press through multiple and hidden sources. To me. it is far more likely that a Bernie supporter in the
DNC passed along information that started this whole ball rolling – and the arrogance of the Hillary campaign and Foundation just let this all play out without challenge until after the election.

I live in an area highly populated with retired CIA folks. To a man, they all believe that Brennan and whomever he hired to support him are political operatives and simply use intelligence regardless of type to make whatever case was wanted by Obama.

I remind you of the Gorelick situation under Clinton where field operatives were stripped of power because Clinton feared they might get a hold of something negative.

By the way, SIGINT is not everything. HUMINT is something as well.

I too am looking forward to part 2. I would reccommend reading the book “The Creature From Jekyll Island” by G. Edward Griffin. It shows how the elite world bankers mainly the Rothchilds were intent on gaining access to Russia’s natural resources and were complicit in financing the Russian Revolutions. Yes there were two, one in February and the Comunist one in October. The book is a history of the National Banks in America, including the Federal Reserve, but behind all of this is the banking cartel and how they manipulate politics for the advancement of Globalism. Russia in not immune to their influence. One of their main practices is to lend money to both sides in a war. The winner can afford to repay the loans and the loser is in debt up to their eye balls and with that comes control by the banks.

Informative article that provides a needed perspective seldom visited by pundits. Look forward to the next installment.

This is a very interested and quick read. I’m genuinely looking forward to reading part II. And someone with his credentials, I’m going to assume he actually knows what he’s talking about vice repeating nonsense he heard or read elsewhere.