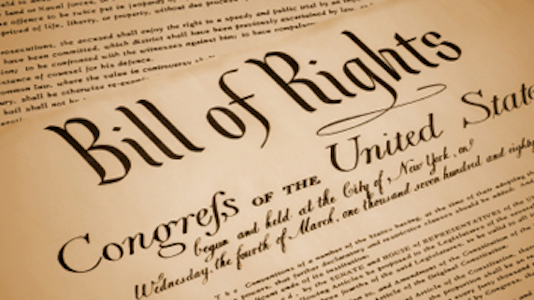 The Second Amendment: The Left’s Most Obvious Contempt for Freedom

The Bill of Rights is the component of the Constitution that clearly enumerates individual liberties and this effort to protect the citizen from the overreach of government is the very foundation of the freedoms we so cherish.

The left proclaims to be the devout guardians of individual rights. They proclaim guardianship of the First Amendment; religious minorities are the focus of this pretext of concern although leftists also prove the least tolerant of any sort of religious principle. They also defend freedom of expression if it involves burning flags or kneeling for the National Anthem, or any other offensive behavior against our nation, but have no use for free speech if it means tolerating those who do not share a similar world view, as we have seen with liberal demonstrations at college campuses like Berkley. Despite such hypocrisy regarding the First Amendment, the left proves more straight-forward on another:

The Left does not even make an attempt to respect, or even acknowledge, the Second Amendment. The right to keep and bear arms proves their most straight-forward contempt of freedom and American values. Leftists, progressives, socialists, whatever else you wish to call those who hate individual liberty and want to bestow all power upon the state, seek to rip the sovereignty of the individual away and make all dependent on a nanny government. For this to happen a population must first be disarmed. Therefore, the gloves are off and leftists make no bones about their attitude towards the Second Amendment.

Ironically, the left declares guardianship of the Fourth Amendment; they do not want programs such as stop-and-frisk to trample on the constitutional rights of inner-city gangsters. However, they are fine with violating the Fourth Amendment for those with a legal carry permit, as was recently upheld by the liberal Fourth Circuit Court in United States vs. Robinson. Accordingly, if a police officer suspects that an individual is armed they can arbitrarily search that person even if the individual is not acting in a threatening manner of any kind. This, therefore, gives them the green light to search those who have a legal carry permit if they so choose. The left will gladly sacrifice other amendments if it means undermining those who oppose their world view.

Another example of this double standard is the current hot topic of illegal immigration and sanctuary cities. Chicago has a city fund to provide legal representation for illegal immigrants. Currently the most crime ridden city in the nation, it is essentially a gun-free zone. Sure, if you are powerful and connected you can now get a carry permit, as is the way in progressive controlled states, but the average plebian cannot: thus, the common citizen has no option for self-defense on some of the worst streets in the nation. Of course, all the gangsters in Chicago seem to have no problem acquiring guns. So, if you are a gangster that is not even in the country legally it would make good sense to go to Chicago. You can do what you want to victimize the population, they are disarmed, and when you get arrested the city will pay for your lawyer. Chicago is a leftist utopia.

Gun control has proven an utter failure in deterring crime. The locations with the strictest firearms regulations are the havens of the worst violence. That fact, however, is not in line with the narrative. Complete disrespect and disregard for the Second Amendment remains a testament to the true progressive agenda: they prove not the defenders of individual freedom but rather the proprietors of a plan that seeks to impose “equality” through force of law. History demonstrates that no such system has implemented equality, but only tyranny. However, this socialist agenda is hard to implement when people are heavily armed and invested in maintaining personal freedom through individual strength. Therefore, the Second Amendment remains the left’s favorite double standard.

The Second Amendment: The Left’s Most Obvious Contempt for Freedom was last modified: November 15th, 2017 by Guest Contributor Salvatore DeGennaro

I have FOR YEARS been in conversation with VCDL folks along these lines: We SHOULD PROTECT each other’s adjudicated Constitutional rights: I SHOULD stand up for 2A rights to own and carry weapons (within the constraints the US Supreme Court described that right, meaning that there ARE limitations that states can create under public safety law) and YOU should stand up for 1A rights or Muslims and other religious minorities to build their mosque, temple, etc and WORSHIP according to their beliefs, gay MARRIAGE rights, transgender rights to use the potty according to their GENDER, etc, again within the constraints described by the US Supreme Court.

I agree that all Constitutional rights are sacred and any attempt to block any religious affiliation from building a house of worship violates the First Amendment. The difference, however, is while some may think this should be done due to prejudice against specific faiths I see no mass movement and proposed legislation come to the floor of congress to enact such an atrocity. Factions of the left, however, do this routinely regarding the Second Amendment and it is utter hypocrisy.

Have you been living under a rock for 30 YEARS! or actually ignorant? At every turn, for 30 years, REPUBLICANS have denounced, sabotaged, lied, cheated, deceived, bullied, etc …. against gay people’s Constitutional rights! AND NOW, having lost in the Supreme Court on the marriage issue are using the 1A religious freedom clause to claim that the country is a CHRISTIAN nation, demanding protections for CHRISTIANS while ignoring all others with faith. Used to be that these anti-Constitutional, anti-Christ LIARS and BULLIES would say America is a ‘Judeo-Christian’ nation – with a nod, at least, to Jews, but in the Obama Administration they began to claim that America is ONLY a ‘Christian’ nation. I actually went to my local synagogue – as a follower of the Lord Jesus Christ – warn them to be aware of this movement to ERASE Jews from American history. And, what happened not a year later: THE JEW-HATING NAZIS came to their synagogue! STOP LIVING UNDER A ROCK!

So the Republicans are trying to erase the Jews from history? That is news to me. As to your typical leftist strategy of equating all conservatives to nazis may I suggest you read your history. If you think that the party that seeks to disarm all citizens, Jews included, is better for minorities then you have obviously lived under a rock for a century. My suggestion is that all faiths exercise their 2A rights and be prepared to protect their houses of worship. That, of course, requires personal responsibility, a notion that runs contrary to the leftist mindset.

I did tell you a direct observation of decades (since I am YOUR ELDER that you should respect AS YOUR ELDER, per CONSERVATIVE value system) that a change happened from ‘conservatives’ routinely speaking of ‘Judeo-Christian America’ to ‘Christian (implying only Christian) nation’. JEWS ARE ERASED in this way.