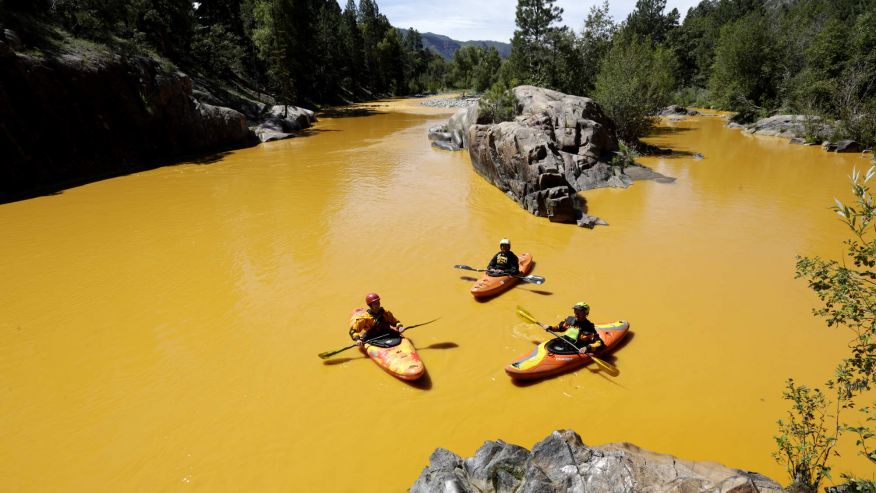 On August 5th, the U.S. Environmental Protection Agency (EPA) “accidently” poked a hole into a holding pond at the abandoned King Mine in Colorado. The result was that at least three million gallons of toxic brew poured out into the wild Animas River, headed downstream to the Colorado River and points beyond. The toxic waste contains arsenic, lead, cadmium, aluminum, copper and calcium.

The spill was totally avoidable. The EPA had to coerce the reluctant mine owners with the threat of $34, 000 per day fines if they were not allowed access to the mine. Prior to rupturing a perfectly adequate holding pond, several local officials and a well-known hydrologist warned the EPA publically that their arrogant actions would cause a massive spill. This has led some critics to suggest that the EPA deliberately breached the containment system so that they would have a pretext for building a massively expensive reclamation facility in Colorado, otherwise unneeded.

Regardless of motive, the slow moving toxic brew turning the beautiful Animas River yellow is the perfect metaphor for everything wrong in the era of behemoth, one-size-fits-all, our-way-or-the-highway mega government in Washington.

The massive, unaccountable, incompetent federal government has poked a hole in the American experience – and the mess is headed downstream. It is a toxic brew that threatens to kill the nation.

That by their very nature governments and bureaucracies are incompetent is not news, of course. But this nation, unique among all nations, has a Constitution that both proscribes and restrains the monster’s appetite.

That constitutional order that erected the civil society and anchored the rule of law, now lays in tatters.

It has been supplanted by a “permanent government” and a political class who hold themselves above the law in arrogance, beyond the control of the people they have sworn to serve. They collectively are what Professor Angelo M. Codevilla calls the “ruling class.” Both Republican and Democrat, they believe in huge, never contracting, suffocating government. They think they can prefect man and his behavior to their image, given enough time and money; and they are willing to do anything to bring that day about.

This ruling class doesn’t care about people; they care about process – and the power that affords them.

From unending social programs riddled with corruption and graft that have sired a new poverty in spirit and torn apart the family; to unending spending debacles – such as the billions spent on a dysfunctional website for Obamacare; to a generationally dysfunctional VA medical system that gets worse, not better, with a never ending honeypot of funding; to an expanding and wasteful intelligence community that can’t or won’t stop terrorists they actually do know about; to wide-open borders and a visa system riddled with graft and corporate greed; to boondoggle agricultural programs; to an insane regulatory apparatus – like the EPA – consumed with an authoritarian worldview of control and submission. The list we could produce hardly has a known end.

It’s easier to find a Yeti in the Himalayas than it is to find success and competence in the federal government.

And yet, amazingly, generations of Americans who have been raised up in a dysfunctional educational system – a scandal and disaster in its own right as it slides to second world status – believe that the “government” has answers and can protect and secure their individual wellbeing – beyond all reason, evidence, and against the very founding rationale of the Republic.

Currently, many “experts” and pundits are scratching their heads about Mr. Donald Trump and his evident success in attracting political support. Against the backdrop of current events, some of us don’t think it’s surprising at all.

Whether you agree with him or not; whether you like or don’t like his abrasive and flamboyant pronouncements – the man speaks his mind. In a day and age when “nice” has become a character trait, Mr. Trump reminds us that nice is not a substitute for brains. When he states that the end result of negotiations or policies are far more important than “good intentions” with which they are pursued, he touches a truth we all know deep down.

And there is a resident understanding in mature people that the man is dead on about the utter corruption of Washington. We have an incompetent government that attracts and rewards incompetence. We have irrational public policies that destroy instead of supporting or creating wellbeing, and enrich a tiny few.

Those of us who support other candidates owe him a debt of thanks for forcing them to talk about serious issues instead of offering up breezy, meaningless soundbites.

The Donald talks with a bracing, if often brutal, honesty that has no respect for political correctness, the banality of multiculturalism, or the ruling class that promotes them – nor the media complex that protects them.

He simply doesn’t care what they think about him.

If we as a free people have any hope of containing – and finally reversing – the tide of toxic sludge poisoning the American experience, we need to encourage more, not less honesty. We need to get a collective backbone that cares more about saving our nation than what others think of us.

The Sludge was last modified: August 18th, 2015 by Michael Giere

I had no idea that EPA head Gina McCarthy had such a long history of incompetence. “Of course, McCarthy was also the supervisor of John Beale who got 32 months in prison for defrauding the federal government by collecting a paycheck from the EPA while claiming that he was working as a spy for the CIA. Incredibly, Beale, the highest paid employee at the EPA, was a no-show for one stretch that totaled eighteen months. That’s right, eagle-eye Gina did not notice that her highest-paid employee wasn’t around for a year and a half.

You do realize that you are an idiot?

You wrote about the “abandoned mine” that was poisoning the ground water for thousands of miles. Of course, the people trying to clean it up are to blame.