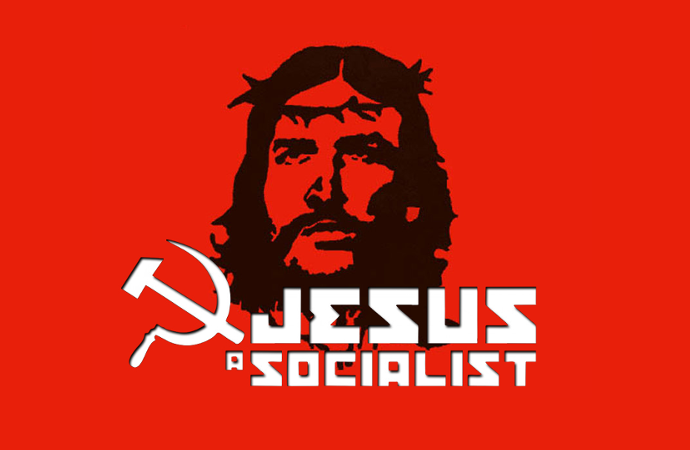 The Socialist Makeover of Jesus Christ

One of the advantages of being an adult convert to another religion is that your mind comes voluntarily and maturely, free of parental directive and coercion, when it can best contemplate new dogma.  My own conversion process was lengthy, but the result is a well- formed Catholic who has a relatively firm grasp on the role that Christianity plays in forming the individual and in guiding society.  Which is why I bristle when I hear liberals claim that Jesus and his teachings were socialist in nature, especially when the Pope is in town.  Bah.

The lessons of the New Testament demonstrate how one is to live in what Jesus called the kingdom of heaven.  Jesus’ teachings are about the individual’s relation with God through Christ.  They are NOT about the political organization of society, because throughout his ministry Jesus did not discuss politics, nor did he prescribe to a particular political ideology.  Thus, any reference made by liberals linking New Testament teaching to socialism is an outrageously erroneous assertion.

The New Testament simply assumes the existence of political society and goes on from there. Christianity is not like Orthodox Judaism and Islam, which provide a complete recipe for this-worldly existence.  Christians must “render unto Caesar,” i.e., render unto a non-Christian basis of authority. Christian society is thus more complex and multileveled, mediating between the pole of the Christian’s spiritual realm and the pole of political and cultural existence in this world, which does not come from Christianity itself.

For example, historical Christianity included the Old Testament as part of its scripture. This was a non-Christian source that provided the sense of living in this world as a community of people under God, a sense that is not provided by the New Testament. Thus the Protestants who created America were able to build a strong national society because they based themselves heavily on the Old Testament with its powerful sense of a people under God.  However, the non-Christian source that supplements pure Christianity doesn’t have to be the Old Testament. It could be classical philosophy or Greco-Roman culture or Germanic warrior feudalism or English nationhood or the American way of life or any number of other sources.

People who try to form their practical ethics on the basis of a pure Christian teaching inevitably resort to literal readings versus contextual/commonsense interpretation of passages in the New Testament, and often go awry.  For example, if you are a Christian general, you may give a beggar your coat, but that does not mean you have the right to cede your country’s territory to an enemy.  Likewise, to interpret the story of the Good Samaritan—the behavior of one man toward another man in need—as a command for a government to allow foreign peoples to mass-immigrate into a country and destroy the actual country and way of life of the people living there is obviously a distortion.  Such distortions consist of taking voluntary individual behavior as a model for the coercive action of the state, which is the goal of the liberal, and not that of the Christian.

So, I am willing to strike a bargain with Scripture-spewing liberals.  Don’t insert leftwing politics into the ministry of Jesus, and I won’t insert Jesus into leftwing politics.  Because it is clear to me that contemporary liberalism, with all of its failings, clearly springs from man, and not of God.

Very good points. Send this article to the Jesuits, please. Catholic Church has been lurching leftwards for a while. This pope is the worst.

Marxist are opportunists, of course. They’ve been trying to hijack and reconstruct the Gospel in the public perception as “socialist” for a hundred years. They will never stop, so it falls to committed believers to shoulder the fight.

Just as there are “low information voters,” as a late evangelical convert myself, I have always been amazed at the large numbers of “low information Christians.” There are so many Christians who really don’t know their Bible, and don’t make much effort to understand the context, or the overarching story that stretches though the sixty six books that constitute Scripture. These chapters fit together like an intricate and magnificent mosaic, and the words of Christ wash over them all – giving them Life.

One quick example of their typical line of argument: the radicals always bring up the story of the rich young ruler who had great wealth. Jesus told him he had to give it all away to follow Him. That was true – for that person. His heart and his identity was completely bound by his wealth. But when the very wealthy tax collector Zacchaeus fell on his face before Jesus, there was no such demand. Instead Scripture says that the tax collector announced to Him and crowd that he would – of his own volition – give half of his possessions to the poor, Jesus evidently thought that was fine, and said, “Today, salvation has come to this house…”

Over and over again throughout the Gospels, Christ speaks to the heart condition of each individual. His clear message; if you don’t know Me personally, and if you don’t have room for Me, then you will miss out on the Kingdom of God, that came to earth.

Jesus told Pilate, the Roman Governor, in John 18:37 that “You are right in saying that I am a king. In fact, for this reason I was born, and for this I came into the the world, to testify to the truth. Everyone on the side of the truth listens to me.”

Yikes! Those are hard words, because as one studies the “Word made flesh,” one sees a few clear lessons about what is expected out of us as individuals. You want a better family, city, state, country or world, then be a better individual. Nothing changes until that changes.

Agree that Catholicism is not a political movement, it frees political things to be political things but to imply that the Catholic Church has not had a range of shifting political “philosophies” over its millennium of existence is grossly untrue. The Pope’s current derivation of Catholic liberation theology, spawned out of Latin America and in decline until his rise to the papacy, is just another in a long string of such philosophies that have been used by secular leaders of the left and right to justify or support given political programs. I see very little here that is different or historically unusual occurring under Pope Francis the 266th pope of the Roman Catholic Church.