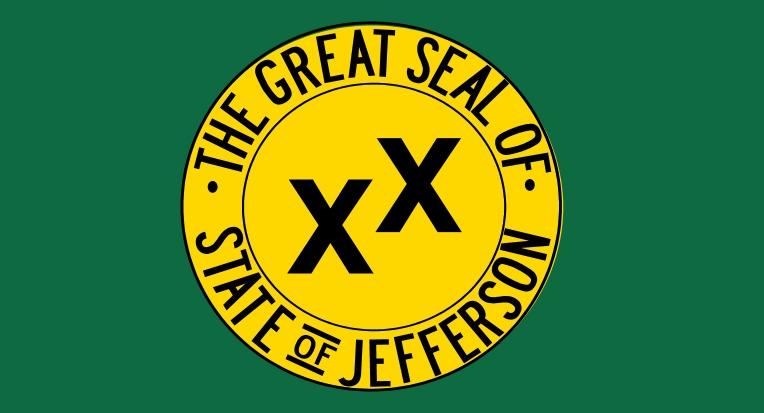 The State of Jefferson

50 is such a nice round number. Â Itâ€™s clean, simple and symmetrical. Â Itâ€™s comforting and easy to remember. Â

The United States became 50 states in 1959 when Hawaii and Alaska were added to the contiguous 48 states (what an ugly number!). Â Itâ€™s been 56-and-a-half years since a state has been added to the Union. Â

Would it surprise you to know that is the longest time spanned in our entire history that weâ€™ve gone without adding a new state to the union? Â The previous record was the time between Arizona and New Mexico (1912) with Hawaii and Alaska. Â Prior to 1912, the entire countryâ€™s history is a steady stream of new states that took us from 13 to 48. Â

While these seems all random for a blog post, I got thinking of this from the work Reason.com has done on the bugeoning movement in Northern California and Southern Oregon to create the State of Jefferson. Â It has dovetailed today with the modern tea party movement that is looking to bring true limited government and reassert 10th amendment rights across the country.

Depending on the source of the numbers, this movement includes upwards of 21 counties in California and 3 in Oregon. Â At least 5 California county boards of supervisors have voted to withdraw from California. Â Democrats dominate California, and less so in Oregon but they are still the majority. Â Their argument is the culture and politics of their region is completely unrepresented and ignored by their respective state governments, but particularly in California. Â The overregulation, environmental policies and high taxation have hurt these rural counties as their children are leaving the area, further limiting any kind of democratic muscle they might be able to wield. Â

Iâ€™ve looked around the country and really canâ€™t find anything this comparable in the country to the political disparityÂ in California,Â relativeÂ to the size of the state. Â Geographically, this State of Jefferson would be enormous and population-wise would be 37th in the Union, but they are completely powerless in state government. Â Â Even in deep blue or deep red states, nothing comparable exists except perhaps western Maryland. Â We have red and blue states, but none with a powerless minority in a part of a state that is so geographically large and one that can actually be a state. Â The State of Jefferson is also not a new idea (see the video in the Reason link above).

This wouldnâ€™t be the first time something like this happened. Vermont was born out of a war between New York and New Hampshire over competing land grants and was briefly a republic. Â Maine was carved out of Massachusetts as part of the Missouri Compromise, Kentucky was a part of Virginia, and Michigan and Ohio almost went to war over the Upper Peninsula. Â Perhaps the most analogous instanceÂ to what is happening in California is West Virginia, where Appalachian farmers who for two generations had been ignored and left with little power in the Tidewater planter-dominated Virginia, used the Civil War as a way to create theirÂ own state. Â

Other states came to be through less than respectable means. Â Nevada became a state before it was ready because Abraham Lincoln needed more electoral votes in 1864. Â Also, during the Civil War, there were many communities in the Confederacy had similar sympathies as West Virginia, especially as you followed the Appalachian Mountains through the heart of Dixie. Â The aforementioned Hawaii and Alaska were also without controversy – southern segregationists questioned bringing in Hawaii on racial grounds, and Alaska was a distant military outpost closer to Russia than the United States. Â The great localist historian Bill Kaufman wrote an entire book on these histories and more.

So what do we think of this? Â This appeals to my limited government heart but I also wonder what forces would be unleashed if we just started creating states based on polarizing politics. Â No doubt Democrats would fight this tooth and nail because it would almost guarantee two new Republican senators. Â Is it healthy for a state like California to lose all of itâ€™s political minority? Â

What is more important, the rule of law of today or the right of communities to live as they see best? Â Californiaâ€™s unique political culture, so thoroughly dominated by the liberal coast up and down the Pacific Coast Highway from San Francisco to Los Angeles, that it leaves the rural north and west along with the San Diego military establishment further south to form a toothless minority that cannot win a statewide election and lacks the population to wield any sort of power within the state. Â

Itâ€™s a fascinating movement and one worth thinking about as Americans across the country have started to rethink the relationship of state and federal government that has failed us so badly. Â

The State of Jefferson was last modified: January 12th, 2016 by Chris Beer

rubbish , i support the state of jefferson , here is why the California government is massively corrupt and no longer works for the people , provable fact….

I have a better idea for a scenario that could work. The above state of Jefferson has very, very, very little chance of success given the political dynamic. But here is an idea that could work.
One of the key reasons that Jefferson wouldn’t work is because the losing states would lose congressional districts and thus power. So, create states from current states with only 1 Representative. Each state is required to have at least 1 Rep, so those states would lose neither a Rep and they still have their 2 Senate seats. Candidates with 1 Rep are: Alaska, Montana, Wyoming, North Dakota, South Dakota, Delaware, and Vermont. If you take a republican state and have a republican Congress you could theoretically divide Alaska (or any other republican controlled state) into 2 ,or more, states.
This would give a very gradual increase of republican power in the House, but it would really increase republican power in the Senate. “Padding the Court” so to speak.

With all the issues and daunting problems strewn in our path I constantly wonder why Reason, one of, if not the major Libertarian publication available in the media market today, can’t seem to resist endless amounts of article and editorial content devoted to one crack pot idea after another. It’s not that libertarianism (with a little L) doesn’t have any interesting ideas and opinions to communicate but it’s just seems they never rise in mass media published context above the level of a college freshman dorm room bong party.

I don’t like this idea for the simple reason that it represents a retreat. People don’t like their state government, and don’t have the political power to change it so they want to take their marbles and go home. Instead of tilting at this particular windmill, I would rather they spend their time and money working to convince more people to vote for conservative candidates. Get people elected to local school boards so we can get our education system out of the hands of progressives who want to indoctrinate our children. Find conservatives willing to run for local county commissions in other parts of the state, and start changing things from the ground up.

Constitution states that no state can be created from an existing state, so the argument is a non-starter.

Except for Texas, only state that came into Union by Treaty.

Article IV, Section III – New States may be admitted by the Congress into this Union; but no new States shall be formed or erected within the Jurisdiction of any other State; nor any State be formed by the Junction of two or more States, or parts of States, without the Consent of the Legislatures of the States concerned as well as of the Congress.

So it can be done if everybody agrees (good luck with that).

Anything is possible if enough people agree to do it but, as stated, “good luck with that.”

I say lets give it a try and see what happens.

In the end we’re not going to be able to coexist with the progressives. Their Borg-ish nature won’t allow it. This sort of low-level secession is a possible solution.

I’d go along if Virginia gets WV back to it’s rightful owners.

I thought there was a historic “State of Jefferson” which was roughly what is now East Tennessee. This was before the Civil War. Please look up. It was declared by went no where. anyway, it was not on the West Coast.