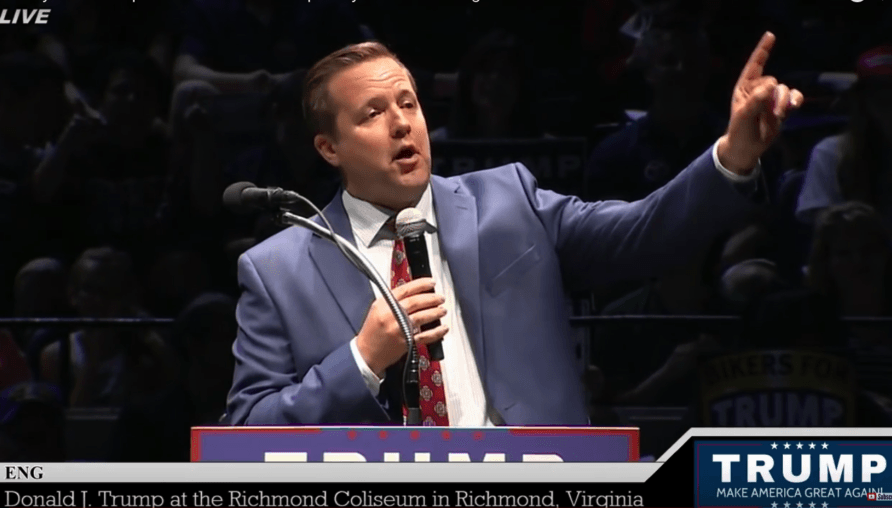 The Sun, and RPV, Shine On Corey Stewart

Last week Corey Stewart called on the RPV State Central Committee to stick to the 2015 compromise, and to go with a convention for the nomination of candidates for Governor, Lt. Governor, and Attorney General in 2017.

This week, after a primary was chosen, Stewart is pleased. Here he is, on WMAL yesterday:

I think there were a lot of establishment Republicans who thought they were doing me a tremendous disservice by giving us a primary,” he says. “For me personally, this is a very good thing. I’ve got a lot of name recognition throughout the state, and name recognition is everything in a primary.”

This comes on the heels of State Sen. Frank Wagner’s announcement that he is, for some reason, running for Governor. His candidacy will continue to divide the Virginia establishment and eat up the margins in Virginia Beach that someone like Ed Gillespie could really use to fend off Stewart.

Proponents of a 2017 convention warned that with a primary the GOP nomination for governor would turn into a multi-man race where name ID and money would trump (ahem) grassroots support. This may or may not be true with Stewart, who might be able to scramble the established divide enough to win this nomination.

It is certainly much easier now with Gillespie, Wagner, Rob Wittman and potentially Pete Snyder all running from roughly the same ideological and political terrain, leaving Stewart free to hit the roughly 37% he needs to win this nomination. More worrisome for some Republicans, particularly many of the establishment who supported this primary vote, has to be the lack of tea party-type candidates to truly activate the grassroots base.

Why do I continue to bring this up? Because it just exposes the way the party is fighting amongst itself—so focused on winning the argument for their preferred method of nomination without actually thinking about the practical effects of that method. The reality of the convention versus primary divide never matched the perceptions out there among partisans and media alike. We, as a party, are more focused on winning internal battles rather than actual elections.

Do I think Corey Stewart can win the 2017 gubernatorial election? No candidate emerging from a contested primary of either party ever has before. (Seriously…look it up. The winners have all been uncontested nominees, or nominated by convention). But because 2017 is an off-off year election with low turnout, the GOP nominee—even if it’s Stewart—will have a chance.

The problem is that many of the fissures which Trump has exposed and exacerbated on the national level will likely be replicated on the state level with Stewart as the party’s standard-bearer. I just find it utterly fascinating that so many who support the primary don’t understand that in doing so they are enabling a candidate who represents so much of what they are against in the party.

But hey, you get to talk sh*t on Facebook so it’s all good, right?

The Sun, and RPV, Shine On Corey Stewart was last modified: August 30th, 2016 by Chris Beer

“Do I think Corey Stewart can win the 2017 gubernatorial election?” Not a chance in hell.

Corey, Jill, Rob could each win with Pay to Play Primary or Friends and Family Faux Convention.

Both allow the bypassing of Party Regulars.

Once the chosen 80 stick the taxpayers for primary or rig the Faux Convention, there is no longer a need or use for party.

Oh no the sky is falling. We never had Whitbeck in charge now that we do things have improved but not those who have their concrete boots or tin foil hats on, Jeanine.

At least make SOME effort to make sense, please.

3 alarms, alarming, ever and sunk oh my!!!
Balanced the budget. That’s what real RPV leaders do.

From a general voters perspective I fail to see either the heartburn or the issue. You will have several gubernatorial candidates effectively associated with the three distinct political orientations representing the three major faction wings of the current VRP the VCN. CF and Trump offered out to the widest available venue of voting base selection in a general Republican primary that is anyone’s to win or to lose. Those that would prefer to continue to squabble like an estranged couple in a contested divorce settlement over who really was promised the wide screen TV and neglect placing their efforts in convincing the voter their candidate desires their vote will lose. Those that go out and win the election by capturing the base vote will win

No one in six months will remember or care what the SCC vote was or was not about. That is of course assuming these party wings like the winning better then the bickering. It will be a great election as it will provide a clear pointer to setting future direction for the party with real option choices made available to the voting public. Most interesting Republican election season in Virginia for a very long time. Whats not to like?

Regarding contested primaries and lack of success in the general election tradition I still can recall my telling people out in Iowa while working for Bobby Jindal that Trump will be a flash in the pan and gone by South Carolina. Today, predicting the future of electorial events by looking to the political past is largely a useless effort in my opinion.

This is alarming, “No candidate emerging from a contested primary of either party ever has (won) before.” Yikes. We’re sunk before we’ve even begun. Just one more reason why we should be having a convention next year.

But, but, but… “inclusivity… diversity…”

Yeah, diversity … and Democrats can vote in the Republican Primary since we can’t have closed primaries.

So can conservatives who no longer consider themselves republicans.