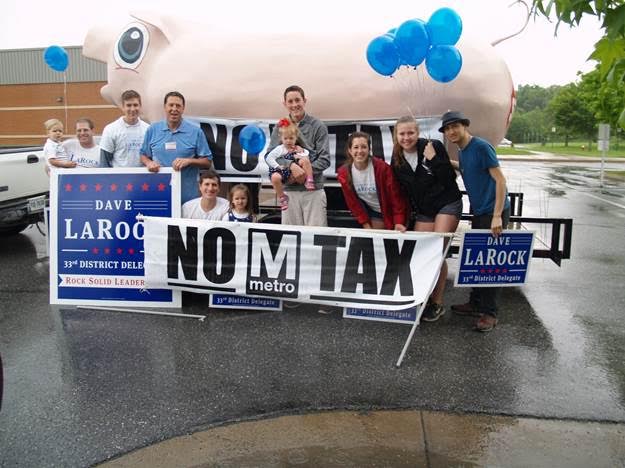 Delegate LaRock with supporters and the Tax Pig

The Tax Pig is Back!

Hamilton, VA â€“ On Saturday, Delegate Dave LaRock and his sidekick â€œTax Pigâ€ took part in the Round Hill Hometown Festival parade and Lovettsvilleâ€™s Mayfest. LaRock used those events to launch a public information campaign alerting Loudoun residents that significant public outcry is needed to prevent a 1% regional sales tax to fund a gaping hole in the Metro budget (est. $7.5 billion over ten yrs.). According to Del. LaRock, a region-wide sales tax would place a hugely disproportionate burden on Virginia, and especially Loudoun County.

Del. LaRock has been a vocal opponent of this 1% regional sales tax which, if approved by the Virginia General Assembly, would place well over half of the regional tax burden on Virginia. Recent media reports show varied opinions on the proposed tax amonglocal officials, Virginia legislators and the public.

â€œLoudoun would also bear a disproportionate share, paying 22% ($76 million/yr.) of the Virginia share, when Metrorail only comes 2 miles into Loudoun past the airport; add to that the fact that Loudoun residents are not likely to use Metro buses. I will continue fighting to make sure Loudoun County doesnâ€™t become the cash cow to bail out Washington D.C., Maryland and inside-the-beltway Virginia jurisdictionsâ€™ decades of mismanagement,â€ LaRock said.

LaRock added, â€œI realize Metro is a key part of the regional transportation network. Metro has been in a downward spiral for many years, but I am encouraged by the leadership GM/CEO Paul J. Wiedefeld has shown in making hard choices to turn the system around. There are still major structural issues to be resolved, including governance, management and labor issues, before Virginia should even consider committing more money to resolve the problem. Virginia has led the way on reforming Metro, passing key improvements to the WMATA Compact years and even decades ago. If we get to the point where Metro has been â€˜fixedâ€™ and still has a need for increased subsidies, station-area tax districts or other options are far more equitable than the region-wide regional sales tax.â€

More information is available at http://www.votelarock.us/issues/wmata-metrorail

Delegate Dave LaRock represents the 33rd House District, including parts of Loudoun, Clarke and Frederick Counties, and the towns of Leesburg (partial), Purcellville, Berryville, Lovettsville, Round Hill, Hamilton and Hillsboro. LaRock serves on the Transportation Committee, the Science and Technology Committee and the Education Committee. Dave and his wife, Joanne, have lived in Loudoun for 30 years, building a successful family-owned general contracting business. The LaRocks reside near Hamilton with Laura, Abby and John, the youngest of their seven children.

There’s NO WAY the VA General Assembly would approve a Metro tax. And I’m not convinced you could get it passed in MD either.

The $$ has to come directly from the Feds or not at all.