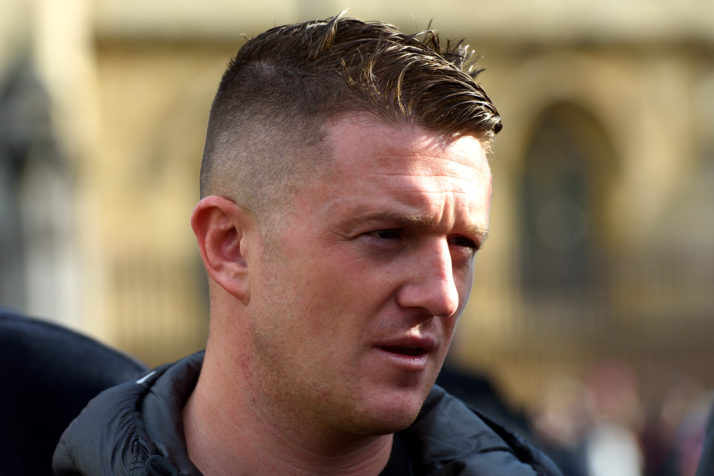 The torture of Tommy Robinson

Tommy Robinson is a citizen of the United Kingdom and a staunch opponent of the Islamization of the U.K.  I am not writing to defend him or his positions, but to expose the horrific nature of his punishment at the hands of the U.K. Courts.  I also write to caution Americans about what can happen when individual freedoms are suppressed through the use of “politically weaponized” government agencies and excessive litigation/regulation.

The situation began when Mr. Robinson was reporting outside a U.K. Courtroom about the sentencing of a muslim “grooming gang”, a term which hides the horror of abuse, rape and enslavement of native British girls and boys for sexual purposes.  His reporting was interrupted by the British police who arrested him. Within a few hours, a judge sentenced him for contempt (in what has been described as a Kangaroo court proceeding). He was immediately whisked off to prison to serve a 13-month term.

The first prison that housed Mr. Robinson was relatively benign, – but then the British government decided that simple imprisonment was insufficient.  Mr. Robinson was transferred to a prison whose population was 70% muslim. Per his testimony, his cell was located across from the prison mosque. His food was served by muslim prisoners who constantly implied that there just might be something wrong with the food.  He was forced to seal his cell against spit and feces thrown into his cell. This caused it to become a stifling hot box. He had a half hour per day out of his cell to escape these conditions. His wife and child were threatened with acid attacks. Notably, the U.K. has one of the highest instances of such attacks in the world.

The injustice was so obvious that the Chief Justice of the U.K. Courts recently freed Tommy Robinson on bail.  He noted that the entire judicial and imprisonment process was nothing but one injustice after the other targeting Robinson.  Unfortunately, it took about two months to get from initial imprisonment to freedom. All during this time, Robinson was forced to endure significant mental and emotional torture, and the potential for physical injury or death at any moment in prison.

Tucker Carlson had an abbreviated interview with Mr. Robinson.  He explained that his imprisonment left him with symptoms similar to PTSD, but that he refused to say it was PTSD because he felt the term should be used for the soldiers returning from battle.  Robinson’s demeanor on the show was shocking. He looked frightened, extremely tired and somewhat unfocused. Tucker seemed stunned by what he was hearing, and it was obvious why. The abbreviated interview lasted about 8 minutes and I encourage anyone to look at it.  (There is also an interview of Robinson on The Rebel Media.)

What is clear to me is the British government used the law to torture Robinson for political purposes.  It is also clear that a political excuse for judicial abuse could happen here in the USA, – and may actually be happening with the Manafort case whose purpose is to “get Trump”.

The global socialists fear losing, and there is nothing they won’t due to protect their power and their totalitarian ideology.  Tommy Robinson, good or bad, is a symbol of what can happen to anyone who is not willingly complaint. Here is a quote often attributed to George Washington, “Government is not reason, it is not eloquence — it is force. Like fire it is a dangerous servant and a fearful master; never for a moment should it be left to irresponsible action.”  Have we left it alone too much? Has it become irresponsible? What more must be done to ensure that it serves rather than masters us?

And God bless Tommy Robinson for bringing this horror of government abuse to our attention.

Someone should start a Go Fund Me page for Tommy. He deserves our support.

Hate is a political artillery piece aimed and fired for one purpose, so as to render the mind of the enemy null and void. The short equation for contemporary Americans is: Hate Speech = Mind Control x Political Objectives.

Hate is more complex than most people think. For example, Martel the Hammer at Tours, Ferdinand and Isabella in Iberia, the whole city of Vienna in 1663 … were these all haters, or did they just not want to be under some particular odious foreign yoke?

As Tommy Robinson found out, culture is never neutral.

Hate speech laws are not compatible with freedom of speech. The founders knew that the worst of speech had to be protected in order to protect all speech. Once you go down the road of deciding what is and is not hate speech you end up with what happened to Robinson.

So is Law qua UCC in which rights are mere state granted privileges. This too is incompatible with Liberty. Under this law system of UCC the Southern Poverty Law Center, the ADL and others are the Supreme Arbiters of Hate, at least up to now.

So while I agree with you, you do not go far enough so as to obtain a genuine Liberty. Thus we are left with an emperor de facto operating under a military government. This is the sadness of my old age.

One other interesting detail just revealed. Robinson lost 40 lbs in prison. He would not eat the Muslim prepared and delivered meals. He subsisted on canned tuna – and that was limited by what he could buy with prison only wages. Apparently, the British government was trying to use starvation to severely injure or kill him.

When our country was under King George’s authority our country rebelled and became independent. Maybe it is time for the British people to do the same and remove the anarchist in power.

Ignoring the problem is always easier until it isn’t. The Brits loved Chamberlain until nothing but all out war was left.

Using the law to torture people for political purposes in the US? You need look no further than the southern border.

The U.K. has very draconian hate speech laws that are rigorously enforced by the police even at the expense of enforcing the laws against felonious crime. An Italian government official recently asked that italy’s hate speech laws be repealed because they are being used by the global socialists to suppress ideas and speech they don’t like. Robinson’s initial arrests as a troublemaker involved, among other things, violations of the U.K. hate speech laws. We have such laws in the USA and they are being enforced.

The rudiments of this government action are here already. Look at the weaponization of the IRS against the Tea Party by Obama. Look at the immediate pre election filing of ridiculous FEC complaints by the 6th District GOPe.

One keeps thinking, “There must be more to this story.” But the answer keeps coming back … free speech does not exist in Britain. Thank goodness for Tucker Carlson, who is shining a light on such abuse.

And it is no better in much of Western Europe.