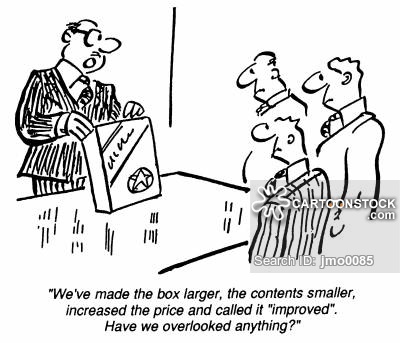 The Triumph of “Improvements” (Defeating the Inner Bag)

The hallmark of American business is improvements. Every product or service must be continuously improved, lest the customer regard it as old-fashioned and out of date. Although the consumer is encouraged to think of improvements as entirely positive, there can be a down-side, too. Consider the following examples.

In my youth and into my adult years, waxed paper was used to package commercially baked goods and confections. During manufacture, the folded wrapping was heat-sealed. When you bought the product, you broke the seal and the paper unwrapped neatly. It could serve as a kind of plate – very useful when you were riding in the car or eating at a picnic table.

This useful wrapping is gone, however. Wrappers for cupcakes and other edibles have been “improved.” A clear plastic wrapping is now used. It’s probably cheaper and more effective at protecting the product than the old wrapping.

Unfortunately, the new wrapper is worthless as a temporary utensil. Usually you must tear the plastic wrapping nearly to pieces to open it – thus rendering it unusable as a “plate” or container. Even if the package could be neatly opened, it wouldn’t do – being far smaller than the old, folded-over waxed-paper wrappings. Candy-wrappers have also been “improved.” Most plastic wrappers must be essentially shredded to open them. They are ruined for any further purpose.

Baked goods and candy are not alone. Most small commodities are now packaged in plastic – often so securely that the package cannot be opened without a sharp implement. I have watched individuals in a waiting room or on a train (or other public place) struggle to open a plastic package without scissors or knife. The struggle generally ends with the person either giving up, or using such force to open the package that the item inside is broken or spilled.

At a doctor’s office I saw a grandmother trying to open a package of candy for a small child. She strained at the package with might and main. Finally, she defeated it, but spilled the contents across the floor. (Fortunately, the child didn’t seem to mind this.) 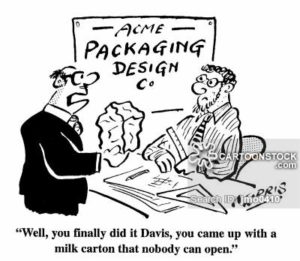 “…you came up with a milk carton that nobody can open.”

Yesterday my wife opened a package of bread – the kind with an outer bag, closed with a plastic clip, and an inner bag of heat-sealed plastic that’s tightly wrapped around the loaf. Usually we use a scissors to open the inner bag, to avoid ruining it. But she evidently found no scissors at hand. By the time she defeated the inner bag (sounds like a suspense novel – Defeating the Inner Bag) it was split open, down to the bottom slices of bread. No doubt this is the reason for the outer bag. The manufacturer knows the inner bag will be ruined by opening it.

Older readers will recall going to the hardware store to buy a few “widgets.” The quantity you needed was placed in a little paper envelope or bag. At home, you undid the envelope and retrieved the items. You put any leftovers back in the original container when the job was finished.

Now, screws, fasteners, and other hardware-store items are packaged so securely that there is no possibility of opening the package without a sharp tool. Even a scissors is sometimes inadequate for cutting the thick plastic of the package. And once you’ve opened it, you can forget about using it for any leftover parts. Moreover, if you want only a few widgets, you might have to buy a dozen, pre-packaged.

Notice the pattern emerging here? Once, the tidily opened package had a secondary use as a plate or as a container for leftovers. Cupcakes, candy-bars, widgets, and toys could all be stored in the containers they came in. But this convenience restrained trade. Today you destroy the package to open it. If you have leftovers, you must buy another product – a plastic container, or your own waxed paper or foil. You buy a separate container to store extra screws or parts. People buy bread containers to keep their bread fresh – after they have destroyed its packaging to open it.

Thus, the “improved” packaging becomes a triumph of modern commercialism, promoting more sales. In its complete evolution, packaging will become so secure that consumers might actually have to destroy not just the package, but the commodity itself, to open it. This would necessitate purchasing another complete item solely because of the packaging – a glorious achievement of self-perpetuating capitalism.

A similar thing has happened with the common flush-toilet – with respect to operation, not packaging. For decades this reliable appliance was the mainstay of safe, modern plumbing. My boyhood home was built in 1912. Its original toilet was still operational. No one thought the flush-toilet needed to change until the conservation-conscious 1970s. Congress, the true experts in flushing things down the toilet, decided that the flush-toilet used “too much” water (3.5 gallons per flush), and needed to be “improved” to use less (1.0 gallon per flush). ‘Too much, compared to what?’ I always wondered. Was there a “water-shortage?”

So the toilet was “improved.” Gazillions of gallons of water were saved, and millions of new, improved toilets were sold. Everybody was happy – especially, plumbers and toilet-makers. Except that no water was actually saved. Studies show that the new toilets actually use more water than the old, 3.5-gallons-per-flush toilets because a gallon of water often won’t flush solid waste properly. The toilet is often re-flushed (several times) to clear the bowl.

Also, the “throat” of the new toilet was narrowed to make the 1.0 gallon flush work. This made the toilet more susceptible to blockage – requiring copious additional quantities of water to clear it, plus a plunger within easy reach of every toilet. (This gladdened the hearts of plunger manufacturers everywhere.)

But the frequent blockages also produced torrents of coarse speech. Homeowners, toiling plunger in hand to unblock their toilets – often wearing Sunday or office clothing – call their toilets and plumbing (as my pop liked to say) “all their true Anglo-Saxon names.” This has given their children a rich vocabulary of new words to use on teachers and ministers. It has led to higher doses of Prozac, increased standing-in-the-corner, teacher-conferences, home-investigations, raids by the language-police, and armed standoffs with homeowners blockaded inside their bathrooms. (#%@&*! Come and get me, copper!”) 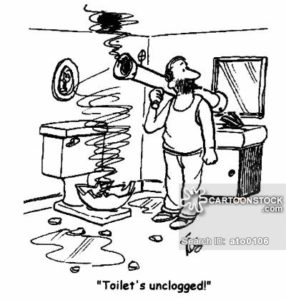 In one bizarre incident, a man became so enraged by his frequently blocked toilet that he tore it out of the floor and threw it from a second-floor window – causing thousands of dollars in damage from the broken plumbing that resulted. (He hit his own car, too.)

Fortunately, the toilet has now been “improved” again. The premium “power-flush” toilet – which costs more than a standard model – employs a special device to produce a pressurized burst of water that almost always prevents blockage. We have them in all of our bathrooms. (The unexpected “whoosh” does tend to startle visitors though.)

Naturally, discussion of the toilet compels some mention of how toilet paper has been “improved” – especially in public restrooms. There we used to find small rolls of toilet paper, like those used in private homes. Although receptacles were sometimes complex, the commodity was a welcome and necessary convenience for travelers or shoppers.

But toilet paper in those small rolls tended to get used up quickly in public restrooms – the more so because vandals sometimes unrolled the paper or stole the rolls. Custodians spent large amounts of time refilling the receptacles with fresh rolls. Bathroom Re-stocker was a full-time staff position in some establishments.

Observing this waste of time and material, eager inventors introduced the Mega-roll. This was a gigantic roll of toilet paper, weighing 8-10 pounds and mounted in a new type of receptacle which protected the paper from damage or vandalism. In many restrooms, the new-style receptacles were mounted where the old, small-roll dispensers had been.

But the size of the new rolls meant that the receptacle opening was now far below waist-level for a seated consumer. This led to contortions to find the loose end of the roll – not an easy exercise when one is seated, half-dressed, in a narrow stall. In my own experience, such attempts sometimes failed – a real inconvenience when you truly need toilet paper. Thus, practical-minded customers – armed with suitable tools –sometimes dismantle the entire receptacle, making the roll fully accessible and removable.

The custodian of one public restroom had evidently tired of repairing the new devices, so he didn’t refill the receptacles. Instead, he stacked the gigantic rolls on the sink-counter. You could heft a roll to the stall or just unroll what you needed beforehand. (One customer dropped a mega-roll on his foot, thus providing endless mirth for insurance adjusters.)

Improvements to both toilets and toilet paper have, of course, furnished copious material for bathroom humorists – i.e., mostly males between the ages of 2 and 102 – to the general disgust of mothers, wives and teachers. Politicians have particularly enjoyed promising to “get to the bottom” of the toilet-fiasco. (For my part, I hope the paper-problem can be wiped out.)

Were the good old days really any better? You make the call. My pop, who grew up in a house without indoor plumbing, regaled us with tales of the outhouse wars he and his brother waged as teenagers. My uncle used the outhouse as a private smoking-parlor, so he would lock the door for long periods of time and let no one else in. In retaliation, Pop set fire to the outhouse to drive his brother out. The fire got out of control, destroying the outhouse. (His brother escaped harm.)

“We both got memorable thrashings on that occasion,” Pop recalled. “And Jim and I had to build the new outhouse.”

As Yakob Smirnoff used to say, “What a country!”

The Triumph of “Improvements” (Defeating the Inner Bag) was last modified: July 8th, 2018 by Woody Zimmerman

Thanks for this dose of humor, Woody! Your writing style never disappoints. But I kept wondering when you might veer off and offer a political analogy about draining the Swamp when all pipes are clogged and the sewage just keeps backing up. Perhaps that’s for another post?

Thanks for the kind words. This might be a job for the power-flush pottie.

One of our ‘low flush’ toilets has cost us thousands of dollars to repair plumbing because the flush doesn’t move the stuff on down the line. It’s sits in the plumbing under the house until it is completely clogged and backed up. Just another thing we can thank the wacky environmentalists for.

I have heard of people going to Canada to purchase the old style toilets to smuggle back into the US. Sounds like it’s worth it!

On the plus side, this has led to the single-room, locking-door potty-torium (sometimes with intra and extra egress) that can be universally used by a) frightened families, b) gender du jour folk, and/or c) crazed/addicted/voyage-of-self-discovery bums looking for a self-cleaning option.

This makes for a whole new opportunity for refuse, needles, trans-bowl waste disposal packaging. Welcome to modern society, lock in the freshness.

Ha! Maybe the outdoor privy wasn’t such a bad thing.

That is called San Francisco.