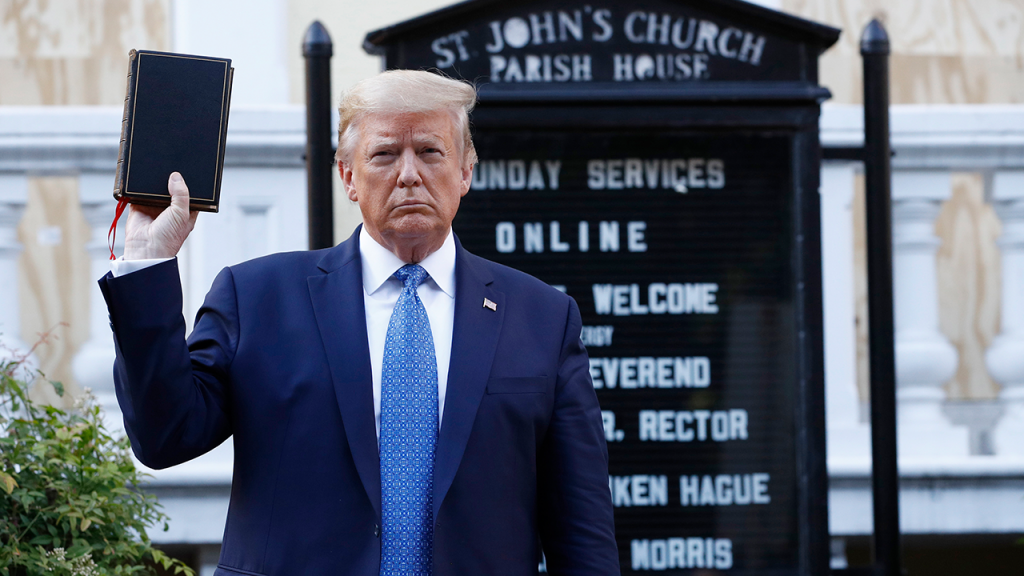 In recent weeks I have received some notes from readers who took issue with what they called my “defense” of President Trump. I had argued that investors favor Mr. Trump because he champions a liberated business climate and a sound approach to law and order. Mr. Trump can run on his record of accomplishments, while Mr. Biden’s record consists only of the Obama presidency of dismal recent memory. Crazed demands from far-left activists to “defund the police” have only added to the Normal Culture’s conviction that a Biden-presidency would be disastrous.

One critic doubted that Mr. Trump can win re-election because he lacks “moral authority.” I wondered if the reader thought Joe Biden offered a superior brand of moral authority, or whether she simply doesn’t know much about Mr. Biden, since he has been hiding out in his basement for several months. Or maybe she will remain uninvolved and not vote for either candidate, as several of my acquaintances did in 2016.

Another correspondent said he voted for Mr. Trump in 2016, but doubted that he could do so again. He wondered if Mr. Trump is ever concerned about others. Does he truly believe in God or in anything besides himself? Was he sincere when he stood in front of St. John’s Church holding a Bible, or was he just trying to be a big star? The reader said he has tried to give Mr. Trump the benefit of the doubt, but he can’t stand the erratic tweets and all the unrest that persists in the Trump administration.

Those responses prompted me to construct some answers to the points raised. I present them here.

Something like that principle is being employed against Mr. Trump by his political opponents and leftist adversaries in Big Media. The president’s successful negotiation of fairer business arrangements with foreign countries, his undeniable success rebuilding and re-energizing the American economy, and his valiant efforts to control our borders – all undeniable accomplishments – are either studiously ignored by his enemies, or are framed as negatively as possible. Mr. Trump’s opponents hammer his style so relentlessly that large parts of the public think he is just a fool who posts inane tweets, hates foreigners and minorities, and hasn’t done a productive thing during his term in office.

I would agree that Mr. Trump certainly doesn’t fit Central Casting’s idea of what a president should look like and how he should express himself. Stylistically, he’s very disconcerting. He doesn’t suffer fools gladly, and he throws back as good as he gets. We’re not used to that kind of combativeness – especially from a Republican president. People are rattled by a tough guy who doesn’t just smile and say, “Thank you, sir, may I have another,” when his opponents throw clods of dung at him.”

In fact, we’ve had some experience with Central Casting’s ideal guy. It was Barack Obama. At a 2007 New Year’s Eve party I asked a young woman whom she liked for president. She said it would be Mr. Obama. But when I asked which of his political positions she favored, she couldn’t think of anything in particular. “He just looks and sounds so good,” she said.

A lot of people thought that about Mr. Obama. Although his political positions were unclear, they ran after him as if he was the Pied Piper of Hamelin. Reporters and pundits practically bowed down and worshipped at his feet. When I wrote articles warning about the direction his presidency would probably take, and arguing against the controversial construct of “social justice,” some acquaintances questioned my Christianity. I should “give him a chance,” said some old college friends.

But toward the end of his first term I heard a caller to a local radio station say, “Oh yeah, I voted for the guy. He looked and sounded great. But I never thought he would screw up this badly.”

That’s the problem we have with choosing a president. We want him to look and sound a certain way that we think of as “presidential.” We tend to regard a president as a kind of high-level actor who’s filling a “role.” He ought to cut a certain image. When he doesn’t, we’re disappointed and we think he’s “unfit.”

In fact, a president is much more than an actor – he’s more like a military general fighting a war. What he does is far more important than how he looks or talks. President Lincoln was much criticized when he put General Grant in command all of the Union armies in 1864. Religious folks particularly deplored the choice. They said Grant drank like a fish and smoked like a chimney. He presented a somewhat frumpy figure, too: his uniforms were usually rumpled and disheveled. He just didn’t look the part. But Mr. Lincoln said he couldn’t spare Grant. “He fights,” said the president. Ultimately General Grant defeated Robert E. Lee and won the war – rumpled uniform and all. General Lee said Grant was a model of graciousness and generosity when they met to negotiate Lee’s surrender.

Regarding Mr. Trump’s “sincerity” and his faith – I would strongly advise against going there. To achieve His purposes, the Lord has an annoying habit of choosing people whose actions and deportment don’t meet our “standards.” The Biblical King David couldn’t possibly serve on the Draperies Committee in any modern Evangelical church – let alone hold any important position. Good grief! He seduced the wife of one of his soldiers, got her pregnant, and then made sure her husband got killed in battle. Why on earth did God put a man like that in such a high position?

Of course, David didn’t get away with it. God held him to account and disciplined him, but he also called David “a man after God’s own heart.” When David was just a lad, he had the heart of a lion. “Who is this uncircumcised Philistine, that he should defy the armies of the Living God?”1 he cried, as he went out to face the giant, Goliath.

The Bible says, “Man looks on the outward appearance, but God looks on the heart.”2 It also says, “God’s ways are higher than our ways.”3 Christians, especially, need to keep that in mind when we choose leaders. In point of fact, religious leaders say Mr. Trump has done more for people of faith than any president in the past century. Jewish leaders say he’s the best friend Israel has ever had. And even Muslims respect the even-handed way he has treated them. His choice of Mike Pence to be his vice-president has to be considered “inspired.” Mr. Pence’s influence on Mr. Trump’s policies has been considerable.

This doesn’t mean I approve of Mr. Trump’s past conduct. He’s no angel. (Not many presidents are. It’s a rough business.) People can change, but this election isn’t for Sunday School Superintendent. Mr. Trump is a New York tough guy, and it’s a good thing he is. I can’t think of anyone else who could have stood up to the treatment he’s received, including absolutely treasonous misconduct from DoJ officials that’s now being revealed. I’ve followed politics for 68 years, and I’ve never seen a president treated so disrespectfully. Somehow we’ve forgotten that it’s the office we owe respect to, if not the man.

Observing a man’s family is also a good indicator of his character. Mr. Trump’s kids are all well turned out and accomplished, and they won’t say a word against him. They think he’s a great guy. (Remember how Maureen Reagan tried to gain political fame by criticizing her pop?) Mr. Trump’s former employees say he was demanding, but also fair and very generous. And, of course, as president he has helped millions of people by creating an economy that has furnished them gainful employment, pride, and economic security. That goes for old retired guys like me, too, who depend on a stable investment portfolio for our income. As I pointed out in my last article, Mr. Trump’s economic leadership has given the country hope that our financial ship can be righted, so we can sail ahead into calmer seas. Shouldn’t that merit at least an “honorable mention” in the Character-score?

General Eisenhower was the president I grew up with. As a schoolboy I followed his 1952 campaign and his presidency. He always reassured the public by presenting a genial, grandfather-like persona, which the media pretty much bought. But Ike had been generalissimo of the greatest military force in history, and had planned and commanded the largest seaborne invasion ever attempted. Officers who served under him said Ike was personable and decent, but was all business and in complete command in military matters. He was a master at handling all the military egos he had to work with.

To cope with the strain involved in his position, Ike smoked 4 packs of unfiltered cigarettes a day. I once heard Richard Nixon say that Ike could be all boyish and enthusiastic when some half-baked new idea was being discussed. “But when it came to a decision,” said Nixon, “he was the coldest, most unemotional man in the world…” The public never saw that side of him, but it was a part of his character that made him the leader he was.

Ike wasn’t perfect, but he was the man God needed at that time. And I believe Mr. Trump is the man God needs right now. A good measure of his effectiveness is the opposition he has faced from both sides of the political divide. A wise older guy once told me, “If everybody is mad at you, you’re probably right where you ought to be.” The word we hear from insiders is that believers in Mr. Trump’s inner circle, including Mr. Pence, have exerted much spiritual influence on him. Members of our family pray for him every day. I hope my readers do, too. He needs all the help he can get.

A final word about the issue of voting, which both of the above-cited critics mentioned. After Mr. Trump took office, my wife and I visited some old friends. They said proudly that they didn’t vote for either Mr. Trump or Hillary Clinton, but had written in some obscure politician I had never heard of. (Fortunately, Mr. Trump carried their state anyway.)

I explained that elections often boil down to “arithmetic,” rather than morality. I asked them to imagine a “state” which has 6 Republican voters and 5 Democrat voters. Normally, the Republican candidate should win. But 2 of the Republican voters don’t like their guy, so they stay home. What’s the score now? Sometimes an election is a matter of choosing the “lesser of two weevils” (as they say in Alabama).

Meanwhile, the war rages on. I’m glad we have a president who knows he’s in one.