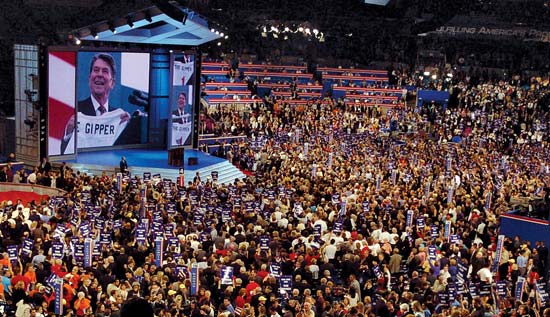 The Truth About the Primary vs. Convention War

Every time thereâ€™s an election contest that involves a State Central Committee vote (‘Tis the season) or any other position where one has a say in a nomination process, the first question generally asked is: Is _______ (insert name here) a primary or convention supporter? The answer to that question most often determines a personâ€™s chances of achieving that seat, depending on which faction controls the venue.

Both the leadership of the Conservative Fellowship and the so-called Establishment in the VAGOP has made it a litmus test, their support generally contingent upon at least the appearance of blind adherence to one form of nomination or another. Current State Chair, John Whitbeck has gotten himself into trouble, in part, because he has demonstrated that he is not a strict adherent. Doing so has gotten him into hot water with both sides of the battle.

The adherence to a primary/convention nomination dogma, does not measure a personâ€™s capability to serve on State Central or any other Party office. It does not reflect on how pure your ideology is. You can be a conservative whoÂ supports primaries and you can be a moderate that supports conventions. These days all it tells you about a person holding or running for those offices is what club they belong to, the Establishment or the Conservative Fellowship.

What it does do is tell candidates, political consultants, and others who to back for those Party offices in order to achieve their aims.

In a vacuum, I prefer the convention process because in order to run a convention as a political operative, you have to know what youâ€™re doing. You canâ€™t just throw money and run an air war. It has a personal touch to it that requires discipline and expertise. If you donâ€™t have someone working for you that understands conventions, you likely wonâ€™t win. Also it gives the Party leadership in charge of the actual process further administrative expertise. Itâ€™s a process that really gets your supporters involved and leads to further commitment from them because they have to put in sweat equity in order to participate in the process. Itâ€™s just a heck of a lot of fun to run that kind of race.

Primaries have their benefits because a candidate who cannot raise much money generally cannot be successful like they can in a convention. The larger the voting universe is, the more money you need to raise. While a good fundraiser can also be successful in a convention, a bad one generally wonâ€™t be successful in a primary. For a political operative, primaries are very formulaic and donâ€™t require much skill. For a candidate, a primary is a good test of fundraising before the general, because thatâ€™s where you really need to turn on the afterburners.

All that being said, both processes have their issues and there is a variety of factors that result in a successful general election. Only a rudimentary analysis has been done here, because the debate over which is better is not the point of this article. I donâ€™t believe in a hard rule one way or another. The truth of the matter is, Iâ€™ve always favored a certain nomination process based on how it benefited who I was supporting or working for at the time.

Hereâ€™s the real truth about the current primary/convention fight: It has nothing to do with ideology. It has everything to do with power and preference. Those in charge of the respective factions only care about the nomination process because they think they can control one or the other better. They misuse the potential choices and treat them as ideological lightning rods. Candidates and people who work for those candidates care about the nomination method based on the likelihood one process or another gives them to win.

The narrative given by factional leadership on the Conservative Fellowship side is: If you are a true conservative you favor conventions. The one given by the Establishment is: If you are a smart Republican and want to win general election, you favor primaries. Neither, as a rule, is true. Whatâ€™s true is ideology has nothing to do with it.

Hereâ€™s some interesting examples of how candidate preferences influenced the determination of nomination methods:

â€¢ In 1989, Virginia had its first statewide nominating primary, a move engineered by conservatives seeking to stop Marshall Coleman from becoming the Republican nominee. Wait, the conservatives successfully instituted a primary to try and stop a moderate? That goes against current conventional wisdom.

â€¢ For the 2008 US Senate nominating contest, many tradition primary adherents voted for a convention to benefit Jim Gilmore over Tom Davis, who favored a primary. After it was made a convention, Tom Davis elected not to run.

â€¢ The 2009 statewide nominating convention was a convention partly because Bob McDonnellâ€™s people did not lobby their people on the SCC to make it a primary, at least initially. In the AG race, McDonnell/Cuccinelli supporters like Mike Thomas, who is one of the boogie men of the Establishment, supported a convention. I have heard from former members of State Central as well as some people in both the McDonnell and Bolling camps, that it wasnâ€™t until Bob McDonnell and Bill Bolling decided that they did not want Ken Cuccinelli on their ticket, that a late push was made by the McDonnell and Bolling camps to change the nominating process from a convention to a primary, as it was thought a primary would benefit an opponent to Ken, like John Brownlee. Cuccinelli had too many supporters, both establishment and anti-establishment, to achieve that.

â€¢ In 2010, 2nd District Chairman Gary Byler, a famed convention supporter, orchestrated his district committee to vote for a primary, because Bylerâ€™s candidate, Scott Rigell wanted one. At the time, almost all the other candidates and their teams wanted a convention because they were afraid of Rigellâ€™s money.

â€¢ For the 2012 US Senate nominating process, many normally pro-convention supporters who supported Allen were convinced to vote for a primary because that was what George Allen wanted. Mike Thomas led the lobbying effort amongst SCC.

â€¢ In 2012, the Cuccinelli faction (although Chris Stearns deserves credit for much of the work) won many district conventions and took over the SCC. They overturned the previously voted upon nomination method for 2013 statewide races because a convention benefited Cuccinelli. He could not raise the kind of money Bolling would have in a primary and he knew it. He wanted a convention and he got one because his people created the narrative and won the seats. Plenty of good, hardworking people like David Oâ€™Kelley in the 2nd District, were voted out of their positions based on the preference of their candidate. Interesting to note, Gary Byler supported Cuccinelli for Governor and fought for a convention.

â€¢ This year, Congressman Brat and his supporters want a nomination convention as the theory is that their conservative activists can dominate the establishment supported Henrico Sheriff, Mike Wade in that contest. Personally, and I may go against the grain on this, I wouldnâ€™t discount Wade in a convention. The possibility exists that he can flood the convention with Sheriffâ€™s deputies and other constitutional office employees. Those people also can bring their families if he really put the pressure on. If I were Brat, I may have considered the primary option because of the power of incumbency, the likelihood that a sheriff is a terrible fundraiser, and the potential of conscripted delegates for Wade.

The primary/convention litmus test should have died in 2013 but it is sadly alive and well today. It needs to die. It is treated like a divisive ideological issue when it is simply a process one. It should not be used as a measure of a personâ€™s loyalty to the Republican cause or loyalty to one faction or another. It should be seen for what it really is, a process consideration made by candidates and their supporters that is made on a case by case basis.

We have many real ideological issues to work on within the Republican Party of Virginia. Thereâ€™s a lot of real problems for us all to deal with. A primary/convention litmus test should not be one of those issues that divides us any more.

The Truth About the Primary vs. Convention War was last modified: January 26th, 2016 by Aaron Gulbransen

[…] is not a leader at all but a schemer seeking to hold on to power. I’ve written aboutÂ the subject beforeÂ so you know I mean what I say when I tell you our leaders should be honest and that’s what […]

[…] is not a leader at all but a schemer seeking to hold on to power. I’ve written aboutÂ the subject before so you know I mean what I say when I tell you our leaders should be honest and that’s what […]

Having attended the disastrous 2013 Convention which nominated Mr. Jackson for Lt Governor (while stiffarming Susan Stimpson), I much prefer primaries. This concern about Democrats crossing over and voting in our primaries is much ado about nothing.

You believe Susan could have won in a primary? Not a chance.

who chooses who goes to the conventions?–does the person represent the people he is supposed to?– HOW DOES THE PERSON AT THE CONVENTION EVEN KNOW?-the last convention I went too had a back room argument resulting in something I had no control of–resulting in something I didn’t agree with–possible effecting the election which was lost
that could never have happened with a primary
I guess both have their problems–but primaries get more people involved,–more people’s opinions, requiring more people’s participation, and yes more money–more support from the voters–more personal involvement of the contestants with the people, NOT JUST SPECIAL INTEREST GROUPS

Good post. What else does State Central do of any importance other than decide the nomination process? Perhaps that’s why it’s a litmus test?

a small group, in this case SCC, excludes participation. While I am no mathmatician, I posit that excluding voters loses elections. this is just based on a numbers theory. If SCC thinks excluding voters actually helps Republicans win elections, that theory should be presented so even the dumbest of us can understand