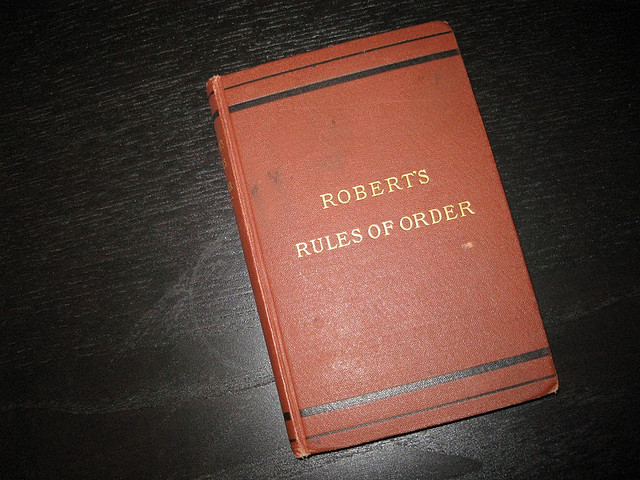 The Truth Behind What’s Really Happening in the 97th District

The fight going on in the 97th House of Delegates is complex. For the layperson who isn’t a policy, rules, and procedures junkie, attending a Mass Meeting or Convention is a learning process for most citizens. I think it’s important that people understand a few important points.

Accusation #1: Tom Miller doesn’t know how to run a meeting.

Truth: Tom Miller was within his rights as a Chairman to adjourn a meeting where participants were being what Roberts Rules of Order calls, “dilatory.” There are very few instances where a chairman may adjourn a meeting without a motion on the matter. I believe Tom Miller was acting within his rights when he abruptly adjourned the Saturday, April 27th, meeting and the May 1st meeting.

Excerpts from Robert’s Rules of Order:

Article X, Officers and the Minutes. “…the chairman should  permit the object of a meeting to be defeated by a few factious persons using parliamentary forms with the evident object of obstructing business. In such a case he should refuse to entertain the dilatory or frivolous motion, and, if an appeal is taken, he should entertain it, and, if sustained by a large majority he may afterwards refuse to entertain even an appeal made by the faction when evidently made merely to obstruct business. But the chair should never adopt such a course merely to expedite business, when the opposition is not factious. It is only justifiable when it is perfectly clear that the opposition is trying to obstruct business.”

Article 6, Classified Motions, Item 40. “Therefore, whenever the chair is satisfied that members are using parliamentary forms merely to obstruct business, he should either not recognize them, or else rule them out of order. After the chair has been sustained upon an appeal, he should not entertain another appeal from the same obstructionists while they are engaged evidently in trying by that means to obstruct business. While the chair should always be courteous and fair, he should be firm in protecting the assembly from imposition, even though it be done in strict conformity with all parliamentary rules except this one, that no dilatory, absurd, or frivolous motions are allowed.”

Anyone in the room at those meetings, or who have viewed the videos of those meetings, know the motions being made were dilatory, frivolous, and obstructing the business of the Committee, which is to perform the necessary duties to conduct the Convention that is set to occur this Saturday, May 4th. Making motions to change the method of nomination, were indeed out of order.

This is a good time to also point out that the State Party Plan does not have any provisions for canceling a method of nomination already in motion.

The manner in which Mr. Hubbard, Mr. Reynold (on Saturday), and Mr. Hayden (on Wednesday) were arguing and speaking over others, while making demands of the Chair were certainly enough to satisfy Robert’s Rules which reads, “In case of fire, riot, or very serious disorder, or other great emergency, the chair has the right and the duty to declare the assembly adjourned to some other time (and place if necessary), if it is impracticable to take a vote, or in his opinion, dangerous to delay for a vote.”

Accusation #2: The King William Chairman and the Hanover Republican Committee Representative had the right to make motions and conduct business, including changing the method of nomination after the Chairman adjourned the meeting.

Truth: This too is false. In regard to both meetings, the meeting business after adjournment was also improper and out of order. After adjourning the meeting, there was no Chairman to preside over the meeting.

At no time can anyone assume the role of Chairman with the authority to entertain motions, discussions, or actions of business. In Chairman Miller’s absence, the appropriate measure would have been to vote in a Chairman “pro tem” to conduct the matters of the committee had the adjournment not been proper (and I am re-stating here that it was proper given the conduct of members).  No Chairman Pro Tem was elected, therefore any business conducted was null and void after Chairman Miller left the room. Robert’s Rules of Order is clear on this. If this wasn’t the case, any rabble-rouser could take over a meeting and assume the role as Chairman.

Accusation #3: The Republican Party of Virginia was acting in an objective capacity when it issued the email making a determination to remove the Convention posting from the RPV website, effectively siding with the dilatory parties.

Truth:  This is false. When RPV sided with the Chairman from King William and the representative of the Hanover County Republican Committee, it became clear they were no longer an objective arbiter of the process.

It is clear from RPV’s response insinuating the convention is canceled was made without the appeals process outlined in the State Party Plan being followed. The correct course of action would have been for affected parties on either side to appeal to the 1st District Committee where an appeal hearing could determine a finding. This appeal process could then be carried on to the State Central Committee. Removing the posting about the Convention did nothing but create further confusion to the disenfranchised people of the 97th House of Delegates District.

Which bring me to my next set of points.

How is any of this good for our Party? We have spoken at length over the course of the last several years about acts that disenfranchise voters (ironic, I know).  Here we have a process that was adopted and both candidates, Chris Peace and Scott Wyatt, participated in recruiting Delegates and Alternates to be elected at their local Mass Meetings. Three mass meetings were held with over 1,500 Delegates being voted to represent Hanover, King William, and New Kent. It appears that the Chris Peace campaign knows they do not have the numbers to overcome the Wyatt Delegate weighted vote, so they are instead resorting to changing the method of nomination with the help of Hanover Republican Committee Chair Dale Taylor, who’s last minute appointment of Mike Reynold to the LDC is the sole reason we are here in the first place. There has since been a petition for her removal, which is ongoing.

This is a terribly rotten deal for the people of the district who completed their pre-file forms, attended a Mass Meeting, and were prepared to come out to vote for the candidate of their choice on Saturday. The good will created between voters and the Party in general has dissolved to ashes. People who began a process trusting it would lead to the nomination of their candidate will most likely walk away from being volunteers, donors, and community influencers for the Republican Party of Virginia. And can you blame them?

Now more than ever, we need to move forward with the planned Convention this Saturday, May 4th. Great efforts have been made (despite rumors to the contrary) to secure a good venue, prepare meals for the Delegates, set up a registration and check-in process, and create a system of balloting.  Tom Miller has done his job as Chairman despite the push back from argumentative and obstructionist members of the LDC.
Let’s move forward, pull together, and finish what was started in the 97th House of Delegates District. The Republicans in Hanover, King William, and New Kent are counting on the Party to do what they said they would do: nominate a candidate for the House of Delegates. Delegates should show up and be ready to vote on Saturday, May 4th!

The Truth Behind What’s Really Happening in the 97th District was last modified: May 3rd, 2019 by Guest Contributor Nick Collette