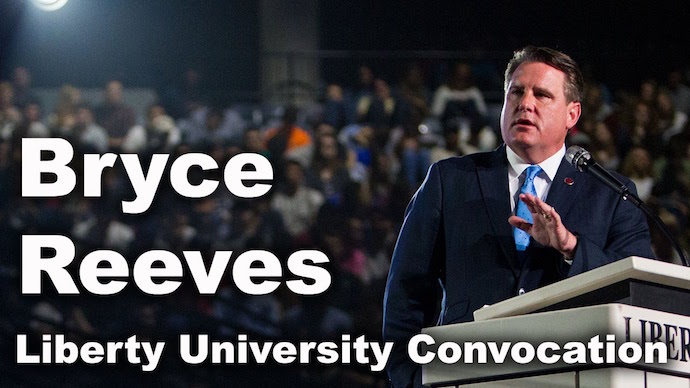 The Ultimate Measure of a Man: Bryce Reeves and Plagiarism

I invite you to listen to the whole speech made by Senator Bryce Reeves, candidate for Lt. Governor, at the Convocation here.

His speech is built around a passionate, personal interpretation of the reading of James Chapter 1:12 which says,

Blessed is the man who perseveres under trial, because when he has stood the test, he will receive the crown of life that God has promised to those who love Him.”

As Senator Reeves weaves this message into his personal experiences to reveal his interpretation of the Biblical passage he has chosen, something happens that most, if not all, attending the Convocation, would not notice.

In “The Liberty Way”, Liberty University’s student honor code, plagiarism is defined as “Paraphrasing or quoting a specific passage from a specific source without properly referencing the source (and/or) replicating another person’s work, in whole or in part, and submitting it as an original work.”

Merriam-Webster is a bit harsher. Plagiarize (v) is defined “to steal and pass off (the ideas or words of another) as one’s own.”

Back in 2004, Nicholas Cage played Benjamin Franklin Gates, an historian and amateur cryptologist searching for a lost treasure in a Walt Disney movie called “National Treasure”. Here is a side by side clip of Senator Reeves and Nicholas Cage. Yes, this is concerning, but not so easy to catch unless you are a Nicholas Cage devotee:

Yet, concerning as this may be, unbelievably, it happens again!  This time Senator Reeves uses a famous quote from Revered Martin Luther King as his own to complete his personal interpretation of a Biblical passage.

A story in the Richmond Times Dispatch, which received very little coverage, can be seen here. In it reporter Patrick Wilson states,

Ravi K. Perry, an associate professor of political science at Virginia Commonwealth University and president of the National Association for Ethnic Studies…..said he found it interesting that Reeves, speaking to a conservative audience, chose to quote President Ronald Reagan by name, but used King’s thoughts without attributing them.”

Justin Higgins, writing about the Convocation speech, noted that the Reeves campaign further deepened the quagmire Senator Reeves dove into by retweeting an image posted by Liberty’s Office of Spiritual Development giving him credit for the plagiarized quote. See Tweet and Higgins post here.

One has to wonder why Senator Reeves chose to appear to make both passages in his presentation taken from others appear to be his own rather than add the strength of character and name recognition of those he chose to copy and thereby bolster his argument. The message he delivered that day was a strong one, and yet, he destroyed that message with either petty pride or sloppy preparation.