The United States of Shame? What's the Worst Thing about your State? With Map

Mississippi is number one in so many things, all of them bad, teen birth rate, childhood poverty, infant mortality, lowest median household income, obesity, and STDs.  Anyone who has ever been to Massachusetts will not be surprised to learn that they have the worst drivers.  It hardly seems possible but Utah has highest rate of online subscriptions to pornographic magazines.  Just what are all those Mormons doing late at night?

This handy map shows statistically the worst thing about each state.   Click on the map to enlarge. 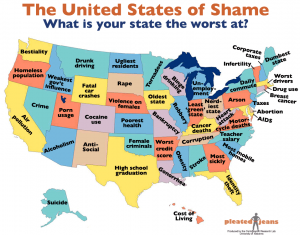 The United States of Shame? What's the Worst Thing about your State? With Map was last modified: September 23rd, 2013 by Jeanine Martin