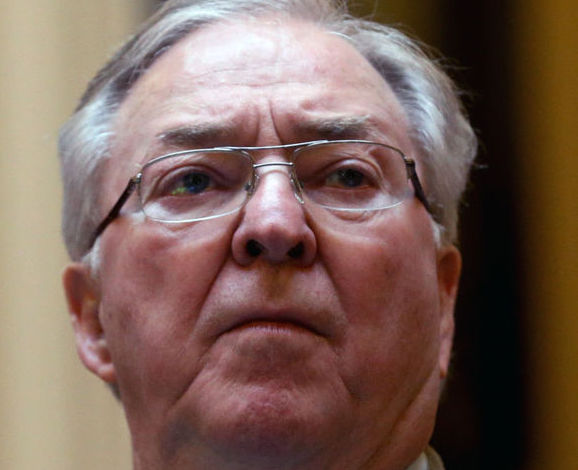 Earlier, in Episode One of a two-part series, I explained how the liberal special interest group Coalition to Stop Gun Violence sunk its teeth into the Virginia State Police while working hand-in-hand with AG Herring to revoke the concealed carry rights of out-of-state concealed carry permit holders from 25 out of 30 states.

There was a time frame from November 2014 until early June 2015 in which Herring’s office appears to have done very little research on this issue.  The reason is that Herring was biding his time.

1. It would allow any person with a CCW permit from another state to carry a concealed weapon in Virginia.

2. It would take away all interpretation and discretion from the office of Attorney General and the Virginia State Police.

The bill was submitted on November 24, 2014.  It appeared to have a critical mass of support.  Given that the General Assembly session would last only a couple of months in the new year, the Coalition to Stop Gun Violence needed to figure out how to kill the bill quickly.  Moreover, if Herring gave his instructions and directives to the VSP at the end of 2014 or beginning of 2015 this would have been a major issue during the 2015 General Assembly session.  The backlash from the VSP announcement might have brought HB 1329 to the forefront.  Killing the bill in the plain sight of day would be difficult.

So the Coalition to Stop Gun Violence and Herring’s office appear to have waited until HB 1329 had run its course and the legislature was fully out of session before finishing their gun control gift.

HB 1329 passed the House on February 10 in a 65-35 vote.  Most of the 35 Nay votes were Democrats with a few Republicans from particularly gun unfriendly areas thrown in.

In the Senate, the Bill passed the Courts of Justice Committee 10-2 with some minor technical amendments and appeared to be on its way to passage in the Senate and submission to Governor McAuliffe.  That is, until the powerful Finance Committee chaired by Republican Walter Stosch (R-Henrico) got a hold of it.

Up until February 16, 2015 HB 1329 had avoided the requirement of a “Fiscal Impact Statement.”  Fiscal Impact Statements are required when a bill will lead to a reduction in state revenues, or increase in state spending.  Until that date, no one acted as if HB 1329 had any fiscal impact.  But the Senate Finance Committee requested an impact statement and received, in part, the following:

Since a person who possesses a concealed handgun permit from another state will be allowed to carry a concealed firearm in the Commonwealth, it is uncertain if this change in the law will impact the number of requests for non-resident concealed handgun permits issued in Virginia. Based upon additional information received, during the last three years the Department of State Police has issued 10,185 Virginia nonresident concealed handgun permits, at $100 per permit, which has resulted in $1,018,500 deposited in the general fund over the three year period. Based on this amount, the yearly average of funds deposited amounts to $339,500. Therefore, it is estimated that the general fund revenue from nonresident permits may potentially decline by $339,500 each year as a result of the proposed legislation.

Suddenly, HB 1329 was expected to cause a budget shortfall.

To remedy this budget shortfall the Senate Finance Committee amended HB 1329 to require that HB 1329 not be implemented until a subsequent budget amendment was passed making up for the supposed $339,500 per year shortfall.

HB 1329 then passed the Senate with the Amendment 29-9.  All those voting Nay were Democrats.

The House rejected the amendments and so the House and the Senate appointed conferees to try to work out a middle ground.  When they were unable to work out a deal, HB 1329 quietly died.

What is not readily apparent is that Senator Walter Stosch appears to have added the amendment to kill the bill for the benefit of the Coalition to Stop Gun Violence.

Senator Stosch was working behind the scenes with the Coalition to Stop Gun Violence.  Sen. Stosch knew that he, and other Republicans, could not openly oppose HB 1329.  So instead of killing HB 1329 in a Committee he added a poison pill.  The budget requirement would allow Republicans, like him, to support the bill while they would be required to pass a nominal but disruptive $339,500 budget amendment over the objections of Democrats.

And where do I get the idea that this is the case?

On February 23, 2015, while HB 1329 was sitting in the Conference Committee, Lori Hanky Haas, Virginia Director for the Coalition to Stop Gun Violence recounts to Lt. Col. Robert Kemmler of the Virginia State Police her conversation with Sen. Stosch regarding HB 1329. 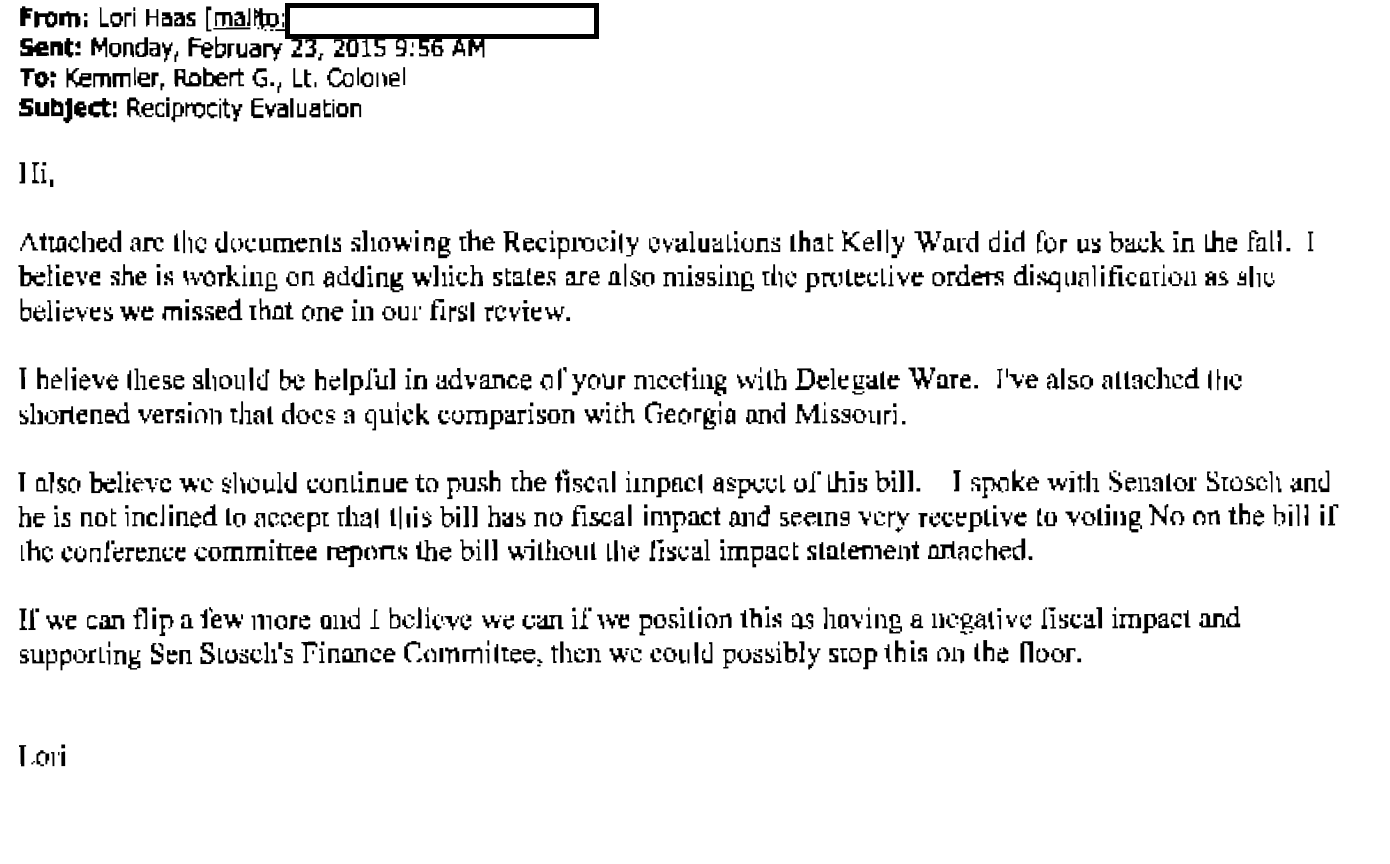 HB 1329 never came back to the floor.  It seems Sen. Stosch’s efforts led to a quiet defeat with minimal uproar. Ten months later Herring could complete his plan by convincing the VSP to revoke CCW rights from 25 states’ residents.

Delegate Ware has reintroduced the Bill for the upcoming session as HB 12.  The retiring Sen. Stosch may no longer be in the Senate, but we can encourage our representatives to pass this bill without qualification in 2016.  Herring’s office can’t advise the VSP to reject out of state CCW holders if the authority to do so is no longer in the law.

This is how the sausage is made in Richmond.  Legislators position themselves as being for or against a particular bill so as to keep the ignorant rubes back in their districts mollified and on board with the incumbent protection racket.  They do this in a number of ways, but one of the most popular and effective means of pulling the wool over the voters’ eyes has been to tie up legislation with budget strings so that legislators on the powerful money committees can kill it in the least open and least transparent part of the legislative process in Virginia, the budget conference committee.  It also works in reverse, where conferees quietly add in language to the budget to serve their biggest donors and advance their pet projects, all without their fellow legislators (much less the general public) ever being the wiser.  That’s the Virginia Way.

More bad news? In 2016, as McAuliffe gears up to help Hillary Clinton turn out the core leftist base of the Democratic Party, he’ll relish the opportunity to issue a highly-publicized veto of any legislation—no matter how sensible or aligned with the Constitution—that protects gun rights.

There is more information coming.  I am not the only one seeking public records.

I will update below with links to the documents sent from the Coalition to Stop Gun Violence to spur Herring’s naked political decision.

Below are key documents utilized in the decision making process that are not widely available:

The First is the comparison chart sent to the Virginia Office of Attorney General and the Virginia State Police.

The second is the internal CCW audit report form the VSP.

The Unwanted Christmas Present: Clearing the Obstacles was last modified: January 12th, 2016 by Paul A. Prados

Is there a petition we can sign? I’m not finding one on the internet.

Thanks for this great work–we appreciate it!

Excellent post! As suspected corruption in politics as usual with no accountability. I’ve always said that many of the so called pro gun legislators would rather we not be armed if they could get away with it. Time to make them pay.

Any appetite for eliminating the “assault knife” errrr I mean switch blade ban?

Leave throwing stars out of it this time!

Does the VSP now work for the CSGV? I’m confused how and why they had such free and capricious access.

I think they play the game like MADD. If they request access and don’t get it the first time something happens the go to the anti gun media and expose the police and blame them. The police fear them

I find it astonishing that a private group, the Coalition to Stop Gun Violence, is communicating directly with the Virginia State Police providing legal advice.

Did I miss something here? Is it not possible in your opinion to produce a veto proof piece of legislation out of HB 12 this session?

Based on the vote counts from 2015 in order for there to be a veto proof majority it would have to include the budgetary rider. Then there would be a later separate vote regarding whether the budgetary portion is funded as part of a budget amendment bill. McAuliffe line item vetoes the funding from the budget amendment and there is not enough clout to overcome that line item “amendment.” Our bill passes but it never goes into effect.

Good riddance to that guy.

This is one of the best posts to TBE ever.

Thank you for the kudos. I was expecting this to be the big piece, but perhaps this is only interesting for those who are heavily involved. My earlier piece setting the stage has widespread coverage. As I hint above, there MAY be more coming.