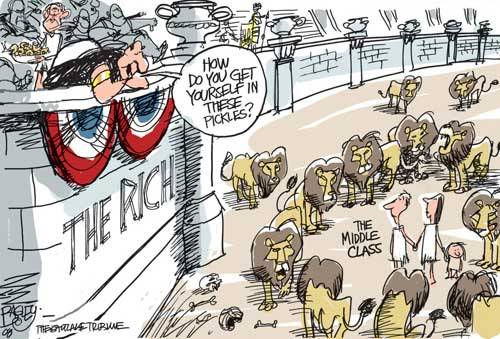 The War Between the Super Rich and The Middle Class

I often cite as my Road to Damascus conversion from conservative to populist the day I learned (via the Internet) that the Federal Reserve was not “the nation’s bank” as I had previously thought, but rather a consortium of the (“too big to fail) private banks run for profit. From that day on, the perplexing pieces of the policy puzzle fell into place and I realized who really held the reins of political power and why our political system was so unresponsive to the majority of American citizens.

As Brian O’Brien wrote in The Tyranny of the Federal Reserve, “Our current ruling class is made up of extremely rich people who owe their wealth to fractional reserve banking and the current monetary system. Their wealth and power are dependent on the flow of money from the Federal Reserve to Wall Street banks to multinational corporations. The banks and corporations use debt money supplied by the Fed to siphon off the wealth of the people.”

Thus, by now it should be apparent that the super rich have global interests, which are in direct conflict to the interests of the middle class and the American nation at large. And Donald Trump, as unfit in temperament as he is to take up residence at 1600 Pennsylvania Avenue, is President because millions of middle-class voters realized that free trade long pushed by the ruling class has destroyed their ability to earn a decent living and allowed the super rich to move capital out of the United States and around the world to where wages are much lower. The elites are also responsible for importing cheap labor from rural Mexico and Central America to depress wages and reduce the ability for Americans to earn a decent living and save for the future. Most importantly, large numbers of immigrants from different nations break up the social cohesion of the general population and reduce the ability of middle class people to organize to protect their interests. Diversity may sound and look good, and in many ways it is, but to the ruling class elites, diversity is a tool to promote division and diversion, because if we are all fighting each other over peripheral issues, we are too preoccupied to pay attention to the people behind the curtains pulling the levers and strings of our financial and political system.

To the informed citizen, it has long been apparent that our congressional “leaders” are merely a tool of the ruling class and are hellbent on preventing the border wall from being built, ensuring massive third world immigration will continue unabated, and that the federal budget will never be balanced. The sad reality is that the two parties exist primarily to give us the illusion of having a choice. But as George Carlin said many years ago, “We have no choice. We have owners. They own us. They own the major banks, the media, the corporations, the politicians and the judges….they have us by the balls.”

Furthermore, most conservatives delude themselves into thinking that lower taxes across the board will create a powerful tide that will lift all boats. In the old days, maybe. But in 21st century America a rising tide lifts only the biggest yachts, and the people driving those yachts are intent on running down and crushing as many little boats as possible. I wish that most of the Republican rank and file would learn to stop viewing the very rich with envy and admiration, but rather as feudal overlords who have nothing but contempt for the great American middle class.

The real conflict in our country is between our current ruling elite who want a global government in which they rule in feudalist fashion over a global proletariat and the American middle class those who believe that our nation, our Constitution, our culture, our heritage, our values, and our middle class lifestyle are things worth preserving. We in the middle class are still a powerful force to be reckoned with. Last November proved that. We should not squander resources in fighting peripheral and essentially meaningless battles, such as transgenders in female bathrooms, but rather on focusing how we can tear away the curtain and expose the men behind it as the real power, and the real cause of the decline of our nation.

The War Between the Super Rich and The Middle Class was last modified: August 24th, 2017 by Guest Contributor Mark Jaworowski

MARK: This is spot on, and articulates what many of us in the middle class wilderness have been saying for better than 30 years. This is why we support President Trump. Thanks for converting to us! Keep writing! John Fredericks

Spot on article but I believe Trumps temperament is exactly why people voted for him. They wanted a street fighter and someone willing to throw punches.

Better watch out Jaws. People are going to think you are becoming a little too new worldly.

It would appear you are walking a very thin wire between None Dare Call It Conspiracy and World Peace Through World Law, while juggling paperback copies of The Hard Way To Peace and Trump’s The Art of The Deal.

Without a net even.

Hear hear! In substantial agreement with some variations. Did you read John Danforth’s reasoned critique of Trump yesterday?

“As has been true since our beginning, we Republicans are the party of Lincoln, the party of the Union. We believe in our founding principle. We are proud of our illustrious history. We believe that we are an essential part of present-day American politics. Our country needs a responsibly conservative party. But our party has been corrupted by this hateful man, and it is now in peril.”

“In honor of our past and in belief in our future, for the sake of our party and our nation, we Republicans must disassociate ourselves from Trump by expressing our opposition to his divisive tactics and by
clearly and strongly insisting that he does not represent what it means to be a Republican.”

To what party do you pay dues? None? Are you an anarchist? We could write the same about the church, correct? In what organized action do you believe? Or is all lost, mankind to devolve from all for one to all for none? Your statement serves one purpose only: The aggrandizement of the Democratic Party. Mission accomplished, Trumpster!