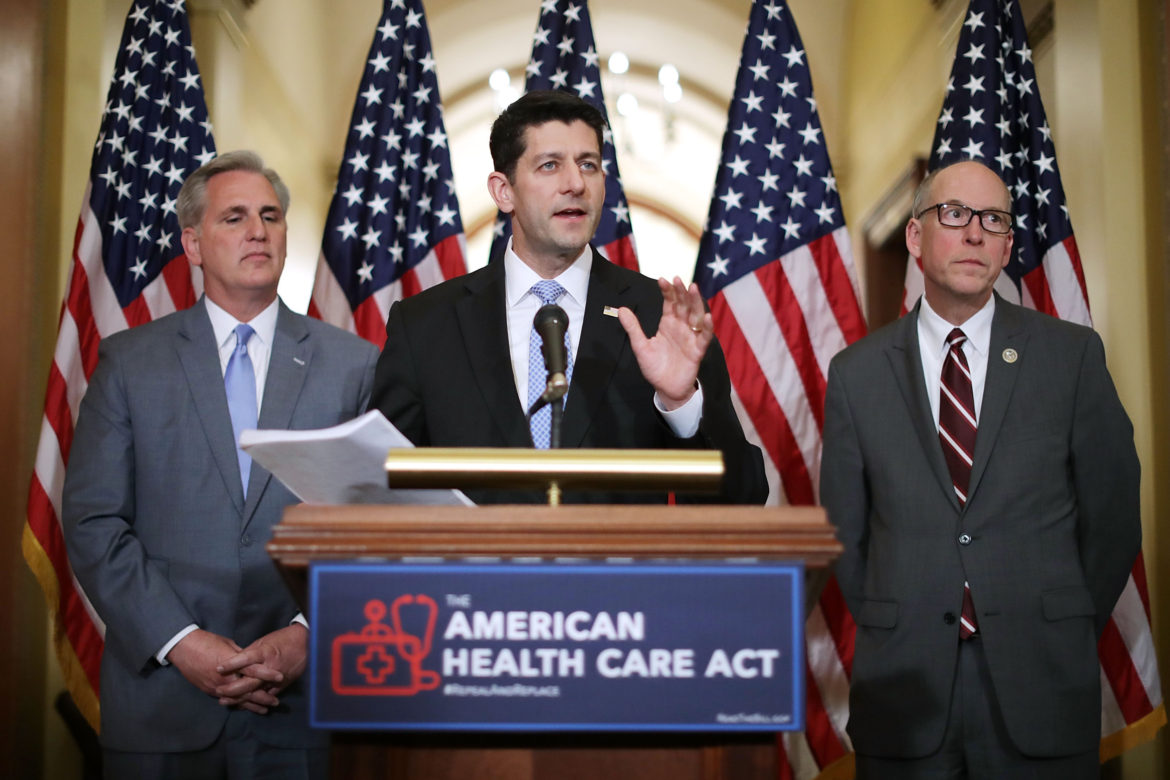 The Way Forward For Conservatives On ACA Repeal, And More

This past spring, after copious amounts of arm-twisting and bribing by Paul Ryan and his team, The House of Representatives passed the American Health Care Act. The original bill was an absolute train wreck, and didn’t get much better with the MacArthur amendments… and then the bill was made worse again to get the votes of moderate to liberal Republican members like Fred Upton of Michigan and Billy Long of Missouri. It bears repeating that many of the shrinking Republican violets hyperventilating about the risk to this or that section of beneficiaries of the ACA actually voted previously for repeal, including the bill that passed the House and Senate in 2015, which was predictably vetoed by President Obama.

The House Freedom Caucus quite rightly opposed the original, with a few exceptions who need to be held to account. Ryan and his ‘leadership’ team then put the squeeze on various Freedom Caucus members, backed up by Trump and his crew in the White House, both directly and on social media. The HFC took heavy incoming fire, mostly held together to oppose, then stood as a bloc to compromise. Good, but it needs to do that in the other direction going forward to be a force. Leadership must be forced to start with a conservative approach on legislation, and work to get moderates on board. Tax reform should be a test case.

The Tuesday group, along with ‘leadership’ like Patrick McHenry, have proven themselves complete frauds, naming this or that portion of the ACA that must be sacrosanct, even after nearly all of them voted to repeal it in 2015. Newsflash in particular for Rep. McHenry: If you support “essential health benefits” or other mandates, YOU SUPPORT THE ACA. You are no conservative. Conservatives do not support or propagate the welfare state, particularly at the federal level.

Senate ‘leadership’, not to be outdone by their House counterparts, concocted a bill that’s even worse than the AHCA, to please weak sisters like Collins, Heller, and Murkowski. Passing nothing at all would be better than passing this, even if Cruz and Lee get certain conservative changes added.

Also, a word about Republican governors like John Kasich, who took the Medicaid candy from the federal government, and now want the rest of us to continue subsidizing them, and are pressuring weaker Republican Senators like Rob Portman. If they didn’t want to be on the hook, MAYBE THEY SHOULDN’T HAVE EXPANDED MEDICAID. They deserve the strongest possible condemnation, especially since they knew going in that the gravy train was set to end in 2020.

Thankfully, Sen. Rand Paul seems to have gotten through to the President, who tweeted his support for what should have occurred in the first place, a straight repeal of much of the ACA as possible in a reconciliation vehicle. Then an argument could be had on what to ‘replace’ it with, if anything. Repeal would enable the effort on tax reform to go forward without the specter of this law hanging over it, with a lower baseline for taxes from the get-go. It seems Sens. Ben Sasse and Ted Cruz have jumped on this train, and it needs to continue to gain momentum. Meanwhile, feckless ‘Republican’ Sen. Bill Cassidy actually said on Fox News Sunday that his nonsense ‘Jimmy Kimmel’ plan (put forward along with Collins) is “the only way we can go forward.” He also said about a straight repeal bill “A nonstarter, I think it’s wrong.” THIS is the guy it was so important to support last year, and this is what we get? Pressure should be brought to bear on Republican Senators up for reelection in 2018 to support repeal. If they do not, conservatives should abandon efforts to reelect them, and seek out nomination challengers for them, and starve those party apparatuses which would support these weak sister incumbents. The inescapable fact is that Republicans as a whole in Congress, particularly in the Senate, are just bad. Weak. They lie to get elected, then make excuses for why they can’t do what they promised, especially when poll numbers on an issue change.

This is where Democrats most hold advantage over us. They understand the mood of the voting public is fickle, and their elected officials seize every opportunity to push the progressive agenda forward, even if it means they’ll take a massive electoral hit, as they did after passing the ACA, as they know the worm will inevitably turn and they’ll be back. Their Republican counterparts are unwilling to do this, either because they don’t believe their own party’s rhetoric, or because they are too concerned with their own precious electoral hides. Somehow, it is always the conservatives who have to ‘take one for the team’ and support terrible legislation, like Bush’s Medicare drug boondoggle in 2004, or TARP. The moderates must do that going forward. Otherwise, for conservatives, or even anyone who expects politicians to keep their word, there is no reason to elect these people.

This brings us to the U.S. Senate election here in Virginia in 2018. In view of what has happened thus far, we must nominate a thoroughgoing limited government conservative who will stand with Rand Paul, Ted, Cruz, Mike Lee and others to fulfill the promises Republicans have made repeatedly since 2010 to repeal the ACA in its entirety. Sending a retread or moderate against Tim Kaine will not only defeat the purpose, but Kaine would likely bludgeon that person in the general. We have to draw the sharpest distinction possible with progressives. We owe it to ourselves, our principles, the commonwealth, and the republic to do so.

The Way Forward For Conservatives On ACA Repeal, And More was last modified: July 10th, 2017 by Robert Kenyon

I don’t care what they do, really. I used to, back in 2008 I cared, but our Debt-to-GDP was only 67% then. Now it is 106%. There is no way to recover from another financial crisis, so what’s the point, since it is inevitable that we will have another recession eventually. Our debt-to-gdp is near what it was at the height of World War II when we had rationing at stores, were building bombers in our car factories, and financing our economy with war bonds .. except, this is the new “normal”, we’re to a point now that everyone thinks this is normal and that it can be sustained forever.

So yeah, go ahead and keep the ACA, hell, give the public single payer for all I care, give away free cars, build people houses, free college, pensions, who cares. I don’t care because the whole house of cards is about to come crashing down and nobody is going to get any of this stuff, they’ll be lucky to have enough money to buy food when it’s all said and done.

Go ahead and pass single payer …

Single payer is a healthcare welfare system. As is the case with European national healthcare, aka single payer systems, you eventually get to rationing and to an add on private health care insurance for those who can afford it. As you correctly point out, Obamacare and its current republican replacement proposal amounts to people looking for a free lunch at the bequest of a government that can’t and won’t say no and a taxpayer who is being ripped off by that government. When you run out of other people’s money, the house of cards collapses.

I can’t find the way forward part in your article? But, I cannot see senators in states that expanded Medicaid giving up what is essentially a single payer system in their states. Republicans in those states tried single payer, and they absolutely fell in love with it. They picked up voters and boosted their economy with money from states like Virginia that said no.

Those higher intelligence single payer Republicans did the right thing for their people, and it looks like those states are going to be handsomely rewarded with even more billions of dollars from the idiots in states that were to stupid to take the money.

Go back and read my posts. They are there for all to see. I told you so.

Taking short-term “free” candy money in exchange for addicting your state to federal largess ≠ ‘higher intelligence’. It makes them looters, freeloaders, opportunists, and complicit in running up the already massive federal debt. This is the dumbest premise I’ve heard all week.

The same people who created, packaged, and sold that line of reasoning to you are the same ones who told you that they would repeal Obamacare on day one.

Those con artists voted over 50 times to repeal Obamacare, as Republican Pat Toomey said today, until it really counted.

I stand with people like Ted Cruz, Rand Paul, Mike Lee, Dave Brat, Thomas Massie, and Justin Amash… who actually mean what they say, and intend to keep that promise. The problem are the charlatans.

Never take candy from the federal government. Ever.

I know what McConnell and Paul are saying when the cameras are rolling. But, in reality, Kentucky expanded Medicaid. Let’s see Paul and McConnell take it away.

If the just announced new Republican plan doesn’t included Medicaid expainsin for Nevada, Kentucky, and Ohio, and something for Alaska and Maine, are they DOA? The only out is to let those expanded Medicaid states keep it, at least for many, many, years. And many billions of dollars.

None of the plans including Obamacare keep the Republican promise of affordable healthcare via competition. Not one word, or one line in any plan to bring down healthcare cost. That means that all the plans are simply non-sustainable.

Leave a Reply to Blizzard of Snowflakes Cancel Reply