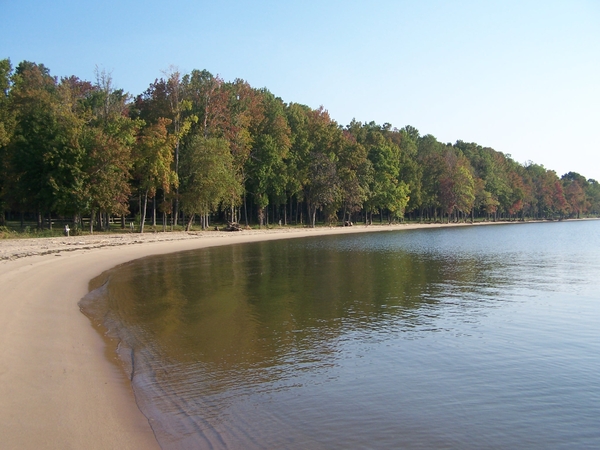 The Woods Still Stand Witness to Our History

Leesylvania’s woods and hills met me with a lush green embrace of solitude and peace and the drifting fragrant smoke of the waterfront barbecue grills. The thick forest lies on a small peninsula overlooking the Potomac and Occoquan Rivers, rich with American history, fauna and flora. Leesylvania is now a state park with a fishing pier and a picnic area much beloved by Central American residents and their families. The laughter of children bathing in the Potomac River echoes through the thick forest. Some of the mature trees giving us a welcoming cool shade grew first as tiny saplings in the Lee family garden.

The bumpy hill leads up to the Confederate gun battery, the gravesite where Henry Lee II and his wife Lucy Grymes were buried. Closer to the bottom of the hill are the chimney remains of the former home of the Fairfax family.  Henry Fairfax purchased the property from the Lee family in 1825 and lived there until 1910.

The Freestone Point, named after the porous quarried rock, juts out over the Potomac River, overlooking the current park’s fishing pier. On rainy days, tree roots ooze out mud below, washed out by a sudden deluge.
Confederate guns were placed here during the Civil War. In the early years of the war, General Robert E. Lee ordered a blockade of the Potomac River in order to cut off the Union’s access to Washington DC. The 32-pound cannons positioned here were part of the blockade that lasted almost six months.

The well-preserved northernmost battery at Freestone Point was used as a decoy while more effective batteries were placed down river at Possum Point, Cockpit Point and Evansport.

When in September 1861 Freestone Point was fired upon, Sgt. Walter Curry of the Washington Mounted Artillery of Hampton’s Legion wrote in his diary, “… as soon as the eleventh shot was fired, our Guns opened on the Lincolnite men of war which were floating majestically on the Broad Potomac.” The Confederates closed the commercial traffic on the Potomac by December. The blockade did not end until March 9, 1862.  (Leesylvania State Park Archives)Close to the cemetery, there are traces of the Alexandria and Fredericksburg Railroad tracks that used to carry necessary supplies to run a large estate growing corn and tobacco.

No trace remains today of the Lee’s ancestral home. Henry Lee II raised eight children here with his wife Lucy Grymes, including Light-Horse Harry Lee—Revolutionary War colonel, Virginia Governor, and father of Robert E. Lee. The Lees have left their imprint in the history of these lands and in the names of our modern landmarks. Richard Lee, the original immigrant from England, was so determined to succeed in the New World that he became, in less than twenty years, an affluent fur trader, a colonel in the Virginia military, and a planter with prosperous land holdings and slaves. He owned fifteen thousand acres of land, more than any other man in the colony of Virginia. He was the colony’s attorney general and a member of the House of Burgesses.

In his old age, the “original Immigrant” returned to England, but his heirs were to come back to northern Virginia upon his death. Subsequently, generations of Lees made their homes and fortunes in Virginia after 1664.
Henry Lee II received from Henry Lee’s will in 1746 all his plantations and land in Prince William County at Freestone Point and at Neapsco (now called Neabsco, Doeg Indian for Point of Rocks) and Powell’s Creek.

The tobacco growing on the plantation was so lucrative that it was shipped to London from the wharf in Dumfries, three miles down from Freestone Point. Dumfries was the commercial hub in Prince William County. Today it remains the oldest incorporated small town in Virginia.

Henry II married in 1753 a “lowland beauty” named Lucy Grymes who is said to have been so popular with men of marrying age, she even became the object of marital aspirations of a young boy named George Washington.
Henry II cleared the land in Prince William County and built a new estate, Leesylvania (Lee’s Woods) the same year he married Lucy.  Modest by standards set by other plantations in the colony of Virginia, Leesylvania was built of brick on a stone foundation, with “double-tiered porticos wrapped around the front and rear of the building,” with twin chimneys, “two and half stories tall.” The home burned in 1797 and there is no image left of it.

Henry Lee was “the first citizen of Prince William County” in his capacity as its attorney general and militia commander. Washington asked him in 1755 to provide 100 men on horseback from Prince William County and bread provisions to “assist in the protection of our Frontiers.”

Lucy and Henry Lee lost their first child, a daughter. A year later, in 1756, another child was born of their union, Henry Lee III, a son who eventually became the famous Light Horse Harry (1756-1818). A statue at the foot of the rocky hill commemorates the revolutionary war hero and father of General Robert E. Lee.

Henry Lee III grew up riding horses, raising ponies, fencing, and practicing his marksmanship. Influential Virginians were frequent visitors at Lee’s Woods, dining and lodging there, including George Washington on his frequent trips from Mount Vernon estate to Fredericksburg and Williamsburg. (Ryan Cole, Light-Horse Harry Lee, The Rise and Fall of a Revolutionary Hero, 2019)

Walking through the dense forest trails, I am in awe as my steps retrace the long-gone steps of so many famous American men and women who blazed this path through history, instrumental in the shaping of our country today.