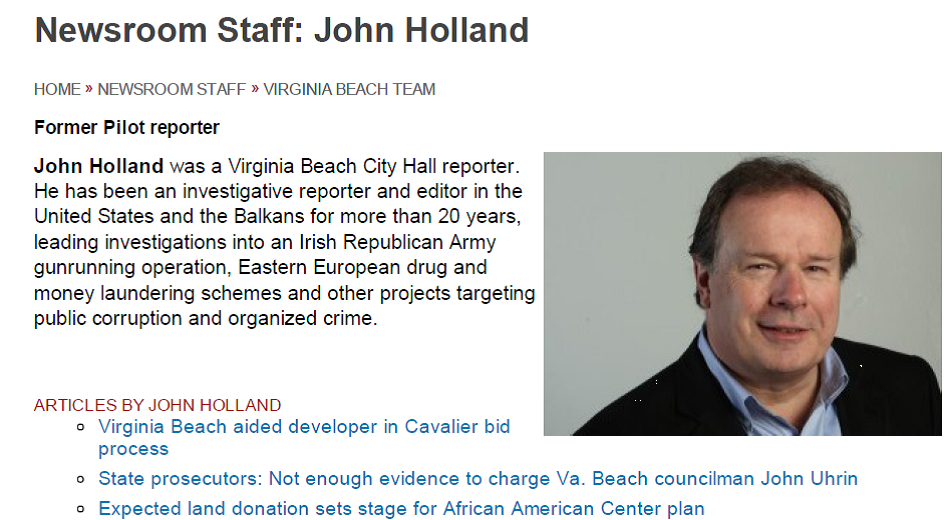 There is no Duct Tape on this Keyboard

We learned today that a man, instrumental to exposing Conflicts of Interest in Virginia Beach, is no longer reporting for the Virginia Pilot.Â  H/t Blue Virginia (credit where credit is due).

Coy Barefoot, a reporter and professor based out of Charlottesville had the following to publicly say on his Facebook page:

meanwhile, the Mayor of Virginia Beach is finally facing charges for his voting favorably on development projects and other deals that benefited clients of a specific bank where he happened to serve as President. (which is illegal, by the way). The bombshell was broken by investigative reporter John Holland last fall in the pages of the Virginian Pilot (I’ll put a link on the jump). What was the result of the reporting? A full year later, Sessoms faces only five misdemeanor chargesâ€” and has hired no less than FOUR top lawyers to defend him). EVEN IF convicted of illegally mishandling the power and responsibility of his office, he will not have to resign. And the Columbia Journalism Review reported earlier this year (http://bit.ly/1OzngAd) what happened at the Virginian Pilot newspaper as a result of their breaking this story: upper management cracked down and discouraged any investigative reporting that might embarrass the powers that be in Virginia Beach. “As one veteran journalist at the paper put it: â€œWeâ€™re walking around with duct tape over our keyboards.â€ None of this comes as any kind of surprise to those of us who’ve been closely following the stories of Virginia Beach over the years. Oh, and that Virginian Pilot reporter who broke the story about the Mayor? This week his byline at the paper’s website reads “Former Pilot Reporter.” (emphasis added)

As I previously indicated Sessoms is subject to removal if convicted.

The culture at the Virginia Pilot per Columbia Journalism Review

Back in January the Columbia Journalism Review took an inside look at the workings of the Virginia Pilot and had the following to say after John Holland broke the story showing the Conflicts of Interest between Mayor William Sessoms, TownBank, and Virginia Beach.

Meetings to stifle the story:

A few weeks after the big story, Landmarkâ€™s executive vice president and general counsel, Rusty Friddell, began meeting with Holland and the editors who were involved in producing the storyâ€¦The meetings werenâ€™t to give kudos on the coverage. Instead, according to newsroom sources, Friddell questioned the journalists about their initial story and asked them to justify why it was solid, important work. Widespread knowledge in the newsroom of the sometimes contentious, hours-long meetings, and concern that an unheard-of level of corporate pressure could be influencing the Pilotâ€™s coverage, have created a fraught environment for reporters and editorsâ€¦what was once on track to be a full-fledged investigative series on the local business and political elite is stalled, and perhaps dead in the water. (emphasis added).

â€œLovers of journalism in this newsroom are pissed. Itâ€™s bad,â€ said one member of the Pilot staff. â€œI want for journalism to prevail. I want for all manner of any possible wrongdoing to be revealed. Thatâ€™s what I want in life. Thatâ€™s why I became a journalist.â€

Ties between Sessomsâ€™ counsel and counsel for the Pilot:

Several journalists specifically mentioned Friddell, an executive who travels in some of the same social and professional circles as the officials the paper has scrutinized. Friddell, the son of one of Virginiaâ€™s most renowned columnistsâ€”he says the journalism gene skipped a generationâ€”sits on the board of a local charity with four TowneBank directors.

Friddell is also the former law partner of William Harrison, a private attorney the mayor has hired as part of his legal defense team. The mayor and his legal team have not approached the Pilotâ€™s editors with objections about the coverage. Harrison, however, has discussed the matter with his former partner, Friddell.

And the most damning commentary:

As one veteran journalist at the paper put it: â€œWeâ€™re walking around with duct tape over our keyboards.â€ (emphasis added)

We as members of the public do not know what happened to John Holland, the man who did the initial nose to the grindstone investigative journalism.Â  As indicated on the Virginia Pilot website:

What is not clear is if he was let go, left due to the culture at the paper, or left for other reasons.Â  I will confirm that he appears to be alive.

In the mean time I have a message for Mayor Sessoms and TowneBank, and an admonishment to the Virginia Pilot:

There is no duct tape on this keyboard.

There is no Duct Tape on this Keyboard was last modified: November 9th, 2015 by Paul A. Prados

Now that you are able to digest two doses of the corruption in Virginia Beach, let’s look at who is the largest advertiser to The Virginia Pilot.
Wait for it ,wait for it……….,.

BINBO! TowneBank.
TowneBank is on the front page every Sunday paper. TowneBank pays 10 of thousands of dollars to their good friends at the Virginia Pilot. Would you as a company ever bite the hand that feeds you?
That’s why Billy Harrison went from Virginia Pilot to TowneBank. Why the front cover just last year when the story first broke TowneBank had an ad with a VERY large flap that covered almost all of the front page. At least Mayor Will Sessoms face.

Also make sure you take note when you see Bob Aston TowneBank commercials on TV. These are played wherever TowneBanks are located. This is called “protecting your brand”. Bob Aston is up late at night working hard for your family while you see a picture of his family in the background.

They will show you all the community outreach programs that TowneBank is promoting in your area. Just doing their share for the neighbors. What you don’t see are all the folks / elected that sit on those committees at TowneBank.

Ewe that smell, can’t ya smell that smell. The smell of mess around youuuuuu.

And on this note of Conflict of Interest and Mayor Sessoms — I bet most readers do not know that the General Assembly passed legislation that goes into effect January 1st regarding Mayors, members of Board of Supervisors, etc: current law allows for the member to solicit an opinion from the Commonwealth’s Attorney on potential conflict of interest (Commonwealth’s Attorney is elected). The General Assembly has now changed the law. Board members and mayors can now get an opinion from a county/city attorney on Conflict of Interest and if they’re given a blessing, then that member can’t be prosecuted. County and city attorneys are employees of mayors, council and Board members.

That’s not entirely accurate. Commonwealth’s Attys are in charge of enforcing the law. Under the old law an opinion from them is defacto immunity because if they do not believe there is a conflict no one else has the ability to prosecute. A letter from the city attorney can only be used as a good faith defense from conviction of a knowing violation.

Â§ 2.2-3121. (Effective until January 1, 2016) Advisory opinions.
A. A state officer or employee shall not be prosecuted for a knowing violation of this chapter if the alleged violation resulted from his good faith reliance on a written opinion of the Attorney General or the Virginia Conflict of Interest and Ethics Advisory Council made in response to his written request for such opinion and the opinion was made after a full disclosure of the facts.

B. A local officer or employee shall not be prosecuted for a knowing violation of this chapter if the alleged violation resulted from his good faith reliance on a written opinion of the attorney for the Commonwealth or the Council made in response to his written request for such opinion and the opinion was made after a full disclosure of the facts. The written opinion shall be a public record and shall be released upon request.

C. If any officer or employee serving at the local level of government is charged with a knowing violation of this chapter, and the alleged violation resulted from his reliance upon a written opinion of his city, county or town attorney, made after a full disclosure of the facts, that such action was not in violation of this chapter, then the officer or employee shall have the right to introduce a copy of the opinion at his trial as evidence that he did not knowingly violate this chapter.

Â§ 2.2-3121. (Effective January 1, 2016) Advisory opinions.
A. A state officer or employee shall not be prosecuted for a knowing violation of this chapter if the alleged violation resulted from his good faith reliance on a written opinion of the Attorney General or the Virginia Conflict of Interest and Ethics Advisory Council made in response to his written request for such opinion and the opinion was made after a full disclosure of the facts regardless of whether such opinion is later withdrawn provided the alleged violation occurred prior to the withdrawal of the opinion.

B. A local officer or employee shall not be prosecuted for a knowing violation of this chapter if the alleged violation resulted from his good faith reliance on a written opinion of the attorney for the Commonwealth, his county, city, or town attorney, or the Council made in response to his written request for such opinion and the opinion was made after a full disclosure of the facts regardless of whether such opinion is later withdrawn provided the alleged violation occurred prior to the withdrawal of the opinion. The written opinion shall be a public record and shall be released upon request.

A good point, but also most likely a moot point in most every locality. If the Commonwealth’s Atty receives supplemental funding for their budget from the local governing body, the State Bar has arguably ruled they cannot be involved in any potential investigations of that body. If my interpretation is accurate, the conflicts of interest act is effectively unenforceable at the local level in nearly every city and county in the state.

Susan would you please send me that information. I’d love to read that bill. Thx

Susan would you send me that bill. I’d love to read that information. Thx

Wouldn’t it be nice if there was a major statewide blog that had deep ties in Virginia Beach who could give fair and independent insight into this.

Is Sessoms friends with Terry McAuliffe?