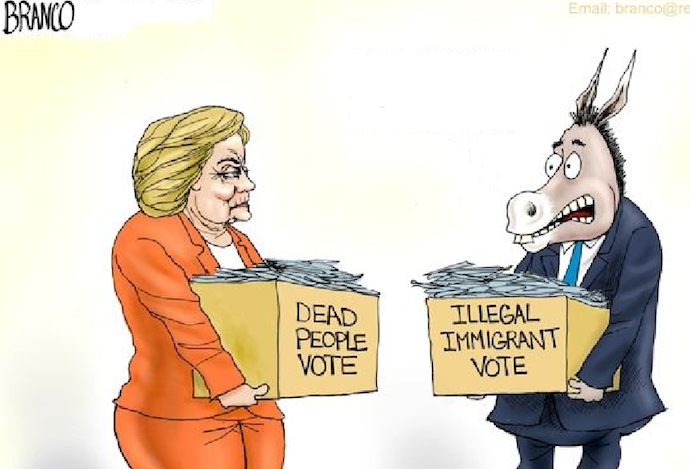 Democrats have spent years pretending voter fraud does not exist, denying clear evidence of double registration, illegal voting, and improper voter identification. President Donald Trump has refused to do the same, instead creating an official commission to combat the problem. Now, Democrats are further obstructing the process in an attempt to gain illegal votes, proving the need for the President’s commission on its face.

New Hampshire was an extremely close state across the board in the 2016 elections. Democrat Maggie Hassan scored a narrow win over Republican incumbent Kelly Ayotte in the Senate race and Trump lost the state by less than half a percentage point.

New Hampshire is one of 15 states that allow same-day voter registration; however, that makes it nearly impossible to immediately assess the eligibility of the voter. A volunteer poll worker simple accepts some form of identification and takes the voters word that they are a U.S. citizen and resident of the state who is eligible to vote. If the individual does not have New Hampshire license or registration, they have 60 days to receive one.

Too often, this leads to obvious holes in the system. Kobach explains in a Breitbart column:

These voters are considered bona fide residents of the state for the purpose of voting, but it appears that is not the case at all, many of these residents might not even live in New Hampshire, a prominent swing state.

As a result of these inquiries, Kobach and the commission traveled to New Hampshire last week to discuss the effects of possible fraud on public confidence in the election process.

But New Hampshire is not alone, poor voting practices such as same-day voting, leave many states susceptible to fraudulent voting.

College Park, Maryland has just joined several other state and local municipalities that will allow undocumented immigrants, student visa holders and residents with green cards to vote in local elections.

Newsweek of Sept. 2017 reports, College Park is joining two other Maryland cities as well as Chicago and San Francisco in allowing illegal immigrants the chance to vote. However, under U.S. law, these individuals are still not permitted to vote in federal elections.

This has the potential to cause great confusion in state voting records.

It shall be unlawful for any alien to vote in any election held solely or in part for the purpose of electing a candidate for the office of President, Vice President, Presidential elector, Member of the Senate, Member of the House of Representatives, Delegate from the District of Columbia, or Resident Commissioner.”

This means these states that wish to allow illegal immigrants to vote in state and local elections have the additional burden of separating registration rolls for different elections. These states run a critical risk of having illegal immigrants, unaware that they can vote in one election and not another with elections that often occur on the same day, casting illegal and fraudulent ballots.

But none of that is surprising. Democrats will continue trying to find ways to ignore the voter fraud problem and deny its existence. Luckily, the President’s election integrity commission is refusing to make that an easy task and is working hard to restore the rule of law to our voting process.