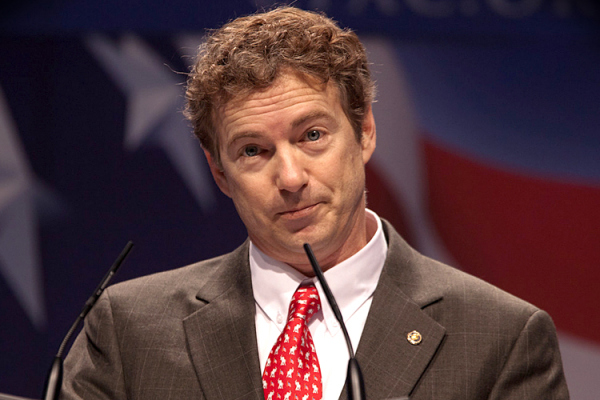 Primary season tends to make us all unrealistic. Our favorite candidates can do no wrong, every poll we post to facebook proves that they are doing better than they actually are, and every other candidate is an idiot. My two favorite unrealistic, tinfoil hat-wearing articles devoid of perspective, are entitled Surprise! The Trump Campaign is Broke (a ridiculous premise regarding a campaign run by a billionaire) and today’s Just Getting Started: Paul in Top 5 of New CNN Poll.

Now, the ridiculous Trump being broke article has a ton of red meat in it, which I’d like to dig into – but the Just Getting Started article is just plain stupid. Let’s start with stupid.

A CNN/ORC poll released Tuesday morning shows Rand Paul firmly in the hunt for the Republican nomination, as he is tied with 2008 runner-up Mike Huckabee and within the margin of error of overtaking both Jeb Bush and Marco Rubio, who are tied for third place behind Donald Trump and Ben Carson. Paul does exceptionally well among Independent voters, as he is tied for third with Rubio among that demographic. In addition, while statistics are unavailable for all age groups, Paul looks to have done particularly well with younger voters (age 18-49), and could see even more room for improvement in overall numbers, as he is the fourth most popular second choice among voters age 50-64.

First, arguing that Rand Paul is “firmly in the hunt” for the GOP Nomination is silly, especially when affixed to the line, “tied with 2008 runner-up Mike Huckabee”. Then, I suppose, for laughs, they point out that Rand Paul is within the margin of error of being tied for third place behind Donald Trump and Ben Carson. Why not just entitle the article, “Rand Paul: Practically in Third Place – Nomination a Certainty!”? Libertarian leaning candidates (many of whom I love) always do well with younger voters, who either don’t have calenders, or who are too stoned to decipher Google Maps’ obvious directions on how to make it to their local precinct. In Virginia, RobSarvis ran as the most thoughtful libertarian candidate we’ve had in-state in decades. Young people, in their excitement, couldn’t bother to make it to the polls.

The Trump campaign ended the third quarter with $254,772.88 of cash on-hand, which is about 48 percent less than the $487,736.16 with which it started the quarter. Trump is therefore spending money at a faster clip than he’s raising it. Moreover, the campaign also has incurred more than $1.8 million of debts and obligations – no doubt, many of them to Trump himself (he’s billed the campaign $700,000 for the use of his jet). That leaves the campaign with negative cash, which should be a familiar position for the real estate magnate whose companies have declared bankruptcy four times.

Donald Trump, broke, and so bad at running his businesses that he’s only worth over a billion dollars, is running his fledging campaign, mired in campaign appearances with thousands and tens of thousands of supporters and leading everyone (democrats included) in the polls, into the ground. It’s obvious that Donald Trump has no shot! He’s broke!

Look, I don’t like Trump, and I’ve taken endless heat here at Virginia Right for my criticism of Trump – but no matter how much I dislike the candidate, I could never be ignorant enough to post an article about a broke Trump campaign as evidence that my candidate is really doing so much better.

My candidate is really doing so much better.

OK, not better than The Donald (aka He Who Shall Not Be Named), but better than most everyone else. If you really want to look at who is building viable Presidential Campaigns capable of competing with Donald Trumps’ Goliath, his MEGALEG, his radical pro-America insurgency, read this stupid article about Trump being broke. 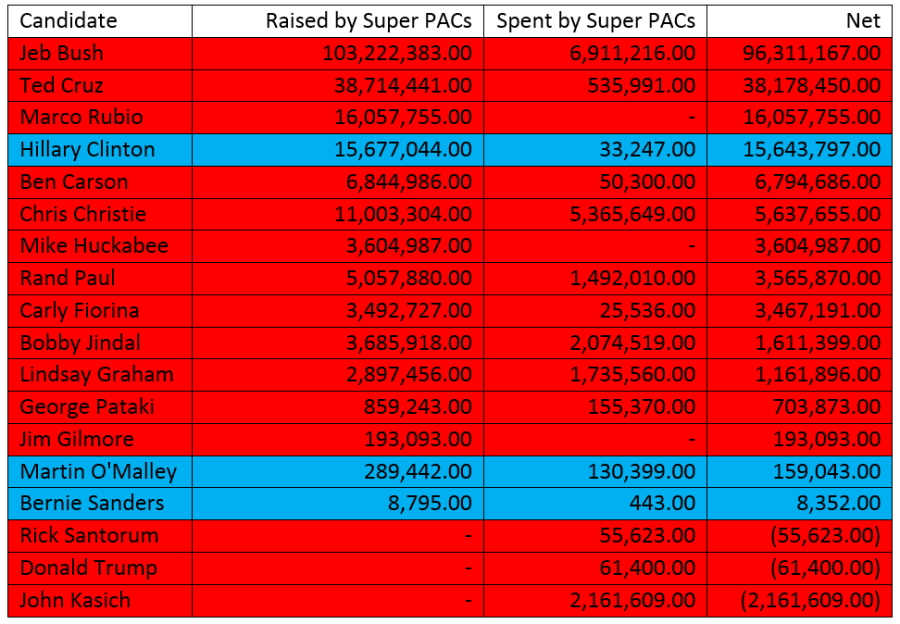 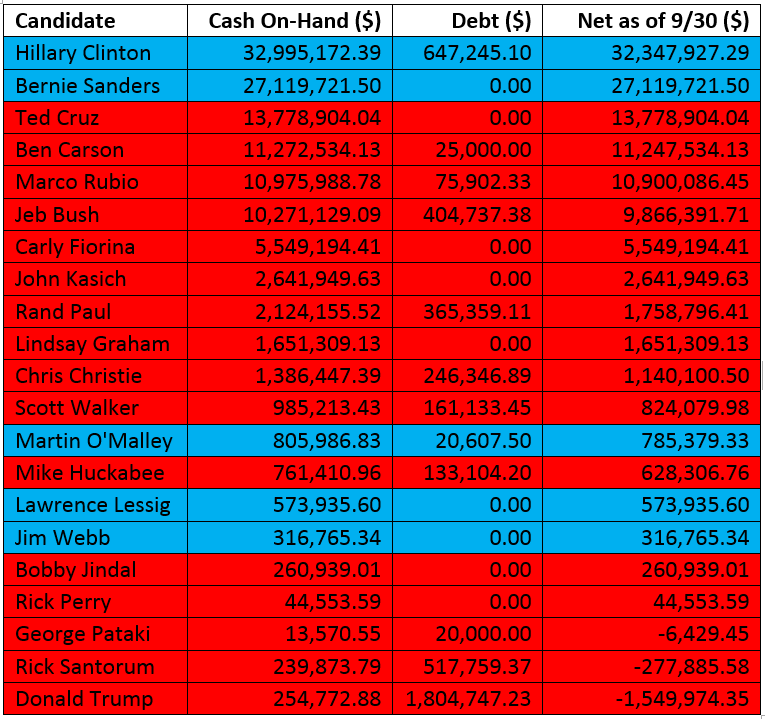 Look at these numbers. Ted Cruz is clearly running the tightest and most organized campaign; but Marco Rubio, Ben Carson and Jeb Bush are right there. Yes, Jeb Bush has almost half a million dollars in debt against his $10,000,000 raised in small donations, but Jeb also has $96,000,000 in SuperPAC bank. What these two charts tell me is that Donald Trump has competition. Ted Cruz, Marco Rubio, Ben Carson, and Jeb Bush are for real. They’ll never have to drop out if they don’t want to. They are running aggressive, thrifty campaigns.

However, Donald Trump is A’OK. What middle class American Family is sitting around the dinning room table, balancing their budgets, watching this chaotic Republican Primary unfold on FOXNEWS, and pondering – “Honey, after fun money, tithes, bills, and college fund, we still have $200 left over at the end of the month. Let’s give it to Donald Trump, because he’s our guy, and that billionaire needs our money”? Is that really happening? OK – yes, it is happening. Someone somewhere is sending Donald Trump money. Some middle class family probably read this article and thought to themselves, “OMG Donald Trump is broke! I need to send him money!”. But those people are weird; and we can’t form intelligent opinions on the basis of weird people.

Donald Trump is not broke and you don’t need to send him money. All this article demonstrates is that Jeb Bush, Ted Cruz, Ben Carson, and Marco Rubio are in this thing until the end. They are serious candidates, running serious campaigns, with lots of supporters behind them. But those are facts – and this article wasn’t supposed to be about facts. Let’s just get back to the narratives that Rand Paul is on the verge of winning the GOP Nomination and Donald Trumps’ campaign is broke.