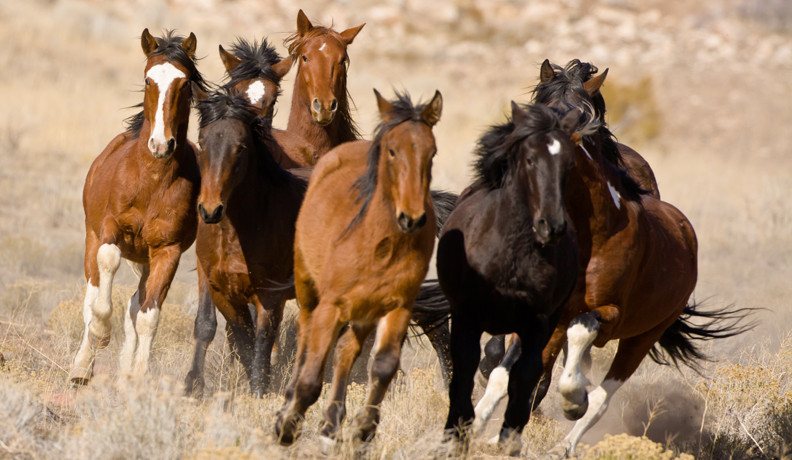 They shoot horses, don’t they?

Back in the 1970’s there were so many wild horses on land owned by the government’s Bureau of Land Management that ranchers wouldn’t rent the land for their cattle because the horses ate all the grasses.  So the government in its wisdom decided to round up some of the wild horses and pay ranchers to take care of them until they could be adopted. What could possibly go wrong?

Very few of the horses were ever adopted. (Living in a horsey part of the state, western Loudoun, I can assure you people do not want wild horses, way too many problems).  The government now owns and pays to support 50,000 wild horses.  This program has come to the attention of our very frugal Congressman from Virginia’s 9th district, Morgan Griffith.  In the Roanoke Times he said,

‘Well, very few (of the horses) were adopted,’ Griffith says. So now we have 50,000 animals living in what he calls ‘wild horse and burro retirement homes.’ Taxpayers pay $80.5 million a year to run the program. Griffith has a different idea. ‘History shows adoptions aren’t going to happen, so we need to humanely euthanize the horses.'”

Easier said that done. Any mention of killing any animals, especially horses and puppies, sends many voters over the edge. They won’t hear of it!  People even object to sterilizing some of the wild horses in the west.

The 1876 Holman Rule which allowed Congress to slash payment to specific programs and jobs could be applied to the “wild horse and burro retirement homes.”  Although the Democrats got rid of the rule in 1983, this Congress is considering reinstating it.  However, Congressman Griffith knows the Holman Rule won’t do what he wants to do.  Again, from the Roanoke Times:

Back to the drawing board for how to get out from under the horse and burro rescue and retirement program and save the taxpayers $80.5 million a year.