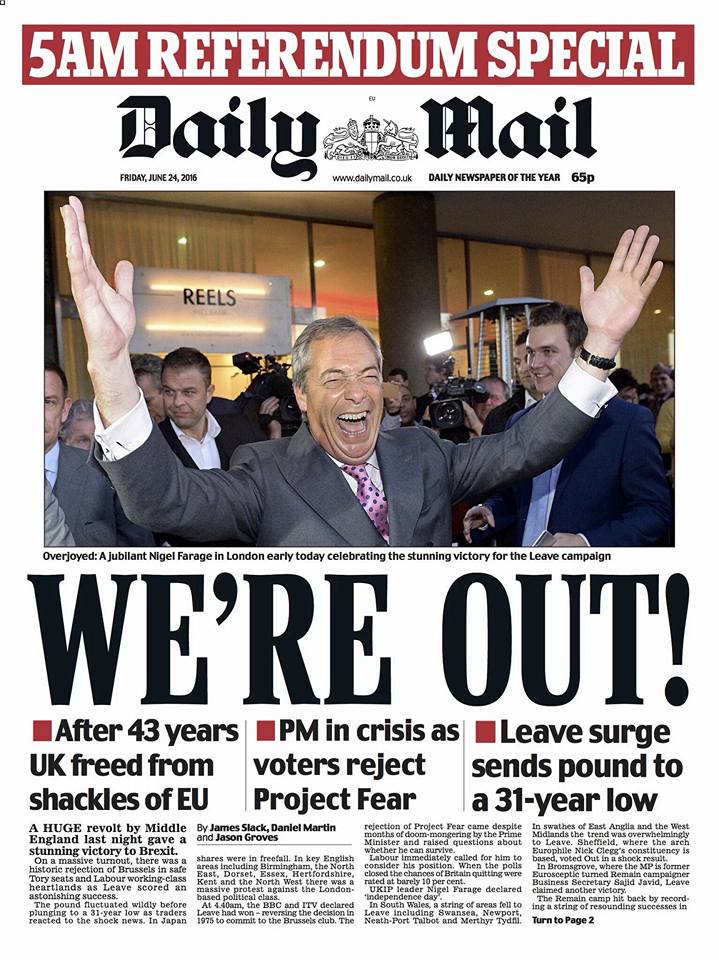 For only the third time in history Great Britain had a national referendum today, voting to leave or remain in the European Union. With 100% of the vote in, the vote to leave the EU won 51.9% to 48.1%. Turnout for the vote was 72 %. England and Wales voted to leave the EU while Scotland and Northern Ireland voted to remain.  Details here.

The question now is will Prime Minister David Cameron resign?  He has said he would stay regardless of the Brexit results but many think his party will force him out.

Financial markets have been rocked by the news with the pound reaching the lowest level since 1985, $1.35.

Popcorn in front of the tele tonight. Can’t wait to watch the whining neo-cons on Fox, et al, trying to hold back their disdain for the lowly plebs of Britain. The New World Order has finally taken a major hit. I hope the Bushes, the Blairs, the Ryans, the McCains, Grahams, McConnells, Clintons, Obamas, of this world etc. have trouble digesting their caviar and lobster tonight.

Those who note the ‘anti-Establishment’ sentiment in the EU exit vote are quite correct to do so. The general European population is in parallel to our American experience of ‘fed up to the gills’ with a status quo which only enriches the few, destroys any healthy connection to reality, and in doing so, conspires to destroy the authority of the family as the basis of all civilized political union.

What is the significance of the British EU vote? It is simply that among the generality of people there is now the stark understanding that the Elites are waging, and have of long standing, waged a war against all of us in the general population – and against centuries of our habit and custom. The recoil among us is broad and deep. The fruit of the Socialist-Marxist policies, now decades in the making, has engendered a Wonderland of Lunacy so extreme as to be intolerable to existence. The pot continues to boil, more shoes will drop. Greater upheavals are just around the corner.

The basis of existence is at stake. We have arrived at a point where compromise with the enemy is treason against God and sanity. Difficulty times, once unthinkable, are now inevitable.

Congratulations British people on taking this major step in taking back your country.

Globalist politics are a danger to individual liberty because they result in the concentration of power in too few hands. Bravo for the British people and cheers for life, liberty and the pursuit of happiness.

And Trump shows that he never misses a chance to put his foot in his mouth through the use of ficticious public statements…
http://aol.it/28XscA8

Very happy to eat crow on this one. I really didn’t think the Brits had it in them.

The anti-Establishment sentiment around the world takes another scalp.

“They” (the establishment) just don’t get it, and it is hysterically funny to listen to them trying to explain what happened with the Brexit vote to each other, their television is wild with it right now, they just can’t believe this has happened.

It’s fun to watch! The very people who tried to stop it are all over the place trying to explain why it happened lol. Too funny. I wish I had some popcorn. Nothing could be more fun than people wearing liberal glasses trying to explain something they don’t understand to each other LOL.

Trump is a referendum in the USA.

I agree. This is a bump for Trump. Obama and Hillary were on the wrong side of history, again. And Trump once again had the right instincts. The Brits rejected Obama’s bullying to Remain, and they agreed with Trump’s suggestion to Leave. The parallels with our own anti-globalist, anti-establishment campaign themes are undeniable.

You mean exactly what Obama has done for the last 7 years?

What do you mean Jeanine Martin ?

Obama did exactly what he said he was going to do – he stopped the horrific drone strikes in Afghanistan, closed Gitmo, got money out of politics, decreased the disparity between rich and poor, etc, just like he said he would.

HEHEhahaha. So naive, even after 8 years.

And the alternative? We’re screwed either way??????

It was Huuuge, not YUGE lol