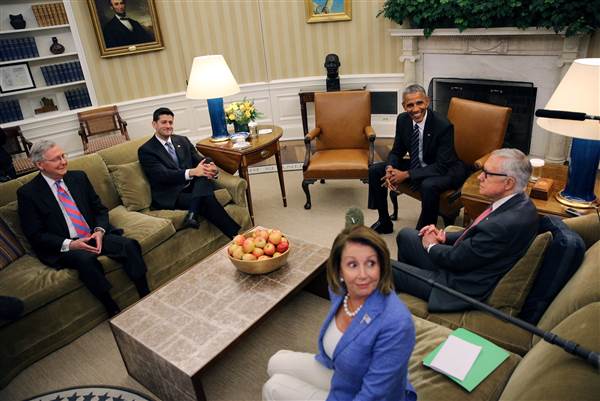 This is How the UniParty Rolls

In 2010, voters issued their first failing report card to the ultra-leftist Barack Obama, and gave the House of Representatives to the Republicans.

It was only a matter of months until many of those voters realized that the new majority in the House had no intention of fighting the radicalization and polarization that the President was ramming through the executive government and the culture. Instead, the Republicans openly facilitated the President’s agenda.

Not one harsh word was spoken on Capitol Hill – unless it was in a fund raising letter trying to get donations from the Republican faithful.

After the voters awarded both the House and the Senate to the Republicans in 2014, the Congressional leadership didn’t even wait for the January swearing in before they capitulated to the hard left, and instead attacked expectant conservatives!

The then Speaker of the House, John Boehner (R-OH), famously ridiculed “boxcar conservatives,” who had just voted to re-hire his majority; and the new Majority Leader, Mitch McConnell, brazenly repudiated his own campaign promises made to the citizens of Kentucky only days before during his re-election campaign!

Boehner’s replacement, Speaker Paul Ryan (R-WI), took the leadership gavel late in 2015 after making a laundry list of promises to anxious Republicans, all of which he has broken; most notably his pledge to restore “regular order,” and stop using the train-wreck Omnibus funding.

This Speaker has proved himself every bit as radical as Mr. Obama in many ways, and is a genuine zealot for wide open immigration and supporting unlimited foreign workers coming into the U.S.

Now, closing in on the last few months of Barack Obama’s presidency, and with the distinct possibility of a Trump Presidency, you would suspect there would be a feisty Congress, finally ready to do the job they were hired to do.

You’d be wrong yet again.

Last year Republicans passed a bloated, budget busting 2016 Omnibus that funded every single Obama initiative plus a tax rider increasing subsidy’s and taxes, even as the national debt raced towards $20 trillion dollars. This year, the Congress is no closer to having an appropriated budget by the December 9th deadline, and it will fall to the lame duck Congress to pass a new budget.

The potential for a disaster is huge. The President wants funding for 110,000 an additional refugee resettlements, the internet tuned over to a U.N. sanctioned body, TPP passed, and bucket loads of new “green” funding. The list goes on.

I came in two years ago, and we had a cromnibus [a pork-packed hybrid $1 trillion dollar funding bill for the remainder of 2015], then we had an omnibus last year, where conservatives had the budget caps increased, higher spending, lost all the conservative riders we worked on the whole year. And so, since the day I’ve been in here [in the House], we’ve had omnibus, omnibus – and then this year, our leadership’s saying, “Boy, we don’t want an omnibus,” but then today, you open the newspaper, and Obama and Mitch McConnell and the Senate are saying, “We don’t want a shutdown,” and “Boy, we’ve got to do a budget by December 9, in the middle of Obama’s lame duck.”

What are citizens supposed to conclude? Is there any other answer than the UniParty – the ruling class – have played the entire system to justify the last minute budget busting pork-bomb, again?

Congressman Brat spelled it out clearly for anyone in doubt:

That’s where we’re at. It’s gonna be a Merry Christmastime again. We’re [the Congress] probably gonna bust the budget caps again. But this time, the one huge new variable is Obama and the lame duck. You can end up funding anything, right? The Puerto Rico bailout, his multiple billions, underfunded; bailout Illinois; do trade agreements; fund energy projects – the whole nine yards. That’s what’s in play.”

It’s enough to make a sailor cry. This is what the greatest nation on earth has come to. It is all well and good to criticize Barack Obama for being what he so obviously is; it is a whole different matter to have the Republican Party and too many of the conservative movement simply fold in with the radicals and blatantly lie about their plans and purposes.

The Congress and its leadership on both side of the aisle simply lie continually. Virtually nothing they say is genuine or truthful. So, regardless of what your congressman is saying today, the likelihood of coming out of the lame duck season without yet more mega-pork spending, giving the internet away, funding more refugees and all sorts of other really bad provisions crammed in it, is just about zero.

Where does your Congressman stand? Are they rubber stamps for the Obama-Ryan team; or do they listen to you? Your Congressman or Congresswoman needs to hear you on the impending budget votes. Time’s a wasting.

This is How the UniParty Rolls was last modified: September 15th, 2016 by Michael Giere

It’s easy to determine where Comstock stands. Where Ryan goes, she follows. Hmmm… Is a plum committee chair assignment at stake?

Furthermore, as the presidential polls continue to tighten in Virginia, how much longer to we have to hear her campaign staff’s pathetic excuse that she needs to run away from grassroots conservatism and avoid Trump in order to not alienate the McLean / Sterling crowd?

Afterall, she can’t possibly afford to lose those people in a district where dems have struggled to get anywhere near 40% (insert sarcasm).

Until the Republican Party starts standing for something we will continue to get people in Congress that only represent themselves. They are only there to do the lobbyists bidding and not even think about the voter until it is time for donations and re-election. Unfortunately, we don’t deserve any better, after all we keep reelecting them. We are getting the government we deserve.

Send your RINO in D.C. a nice little Judas goat bell for Christmas.

And/or a nomination challenge… just for fun.

Where do you get a little Judas goat bell? I’m thinking volume discount!

how’s he been voting on the CRs?

Against…….lately. since he was primaried.

Every time somthing like this is written, it reminds me why I am voting for Trump. Elected liars all, they won’t lift a finger to do even one single thing. It is the elitist Republicans who now complain that they were misunderstood. Well, my bet is they will undercut Trump at every opportunity after he is elected president.

I agree, once Trump is elected the Republicans will be out of excuses. If they don’t start cleaning out the government we need to clean them out.

I am skeptical that Trump is any different. In fact, he has demonstrated that he more in common with those you loathe than you think! That said, I still view him as less odious than Hillary Clinton.

Trump IS the Uniparty. His solution to Obamacare is more Medicaid. Someone tell me again why the grassroots fought the Medicaid expansion in Virginia for so long ??? Only to have Trump and his New GOP push it even further?

Not to mention government-paid maternity leave and govt handouts for childcare. In other words, Hillary’s plan or more.

Excuse, me, but that doesn’t take money away from government, it takes it away from taxpayers. It redistributes wealth.

BTW, Boehner and McConnell are best buds with Trump. He’s Boehner’s golfing buddy. They are looking forward to implementing all his liberal policies. People need to watch more than FOX to find out the truth and realize they have been unwitting instruments in the destruction of liberty in the USA.

I understand your point. The Trump proposal is more oriented to people who work for a living. Think of it this way. If you are on welfare and have a baby, your checks don’t stop and probably increase. If you work and have a baby, your checks stop until you return to work and somebody else has to fill in. This puts a special burden on the mother, the other workers, and the small business.

As far as money from other taxpayers, your point sounds reasonable but if the money comes from programs that are currently useless, say the department of education, then the redistribution actually is beneficial in more than one way.