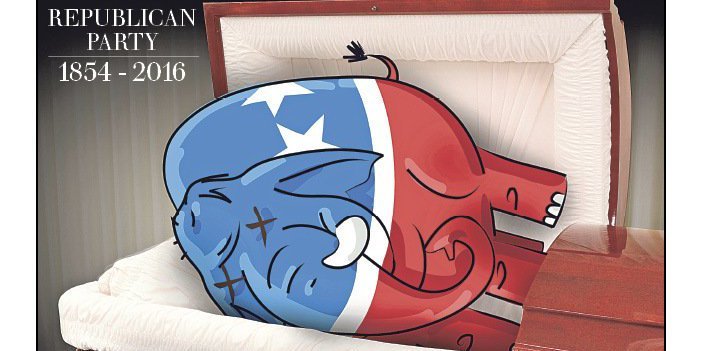 This Is The End

“The End of Our Elaborate Plans…” – The Doors

It has become clear that the ascendancy of Donald Trump ushered in an end to Republican political power across the nation. Punishment for the rise of anti-intellectualism within the Republican Party is forthcoming; the populist wave of 2016 represented a last tantrum and a beginning of the final countdown to the birth of what Tom Perez keeps referring to as the new Democrat Party. 58% of White, College Educated women voted Democrat on Tuesday. Democrats won Millennials by 39 percentage points. Healthcare was the number one issue in the Virginia Gubernatorial race and 77% of people that listed healthcare as their number one issue voted Democrat. Democrats won 61% of undecideds and 60% of Virginians claimed that they disapproved of the President (exit polls).

Republicans will never reclaim national political influence until all the populists have been relegated to the dust bin of history. We must reject any candidate in any primary backed by Steve Bannon or populist Virginia operatives closely associated with Corey Stewart, Donald Trump, or the populist powers in Virginia Beach. I will not support candidates who welcome the support of populist operatives. I will not support candidates who remain luke warm with regard to President Donald Trump.

I know that Donald Trump has done many good things as President. He’s had some good EO’s, apparently necessary because Congressional Leadership has sat on their hands. He nominated a good Supreme Court jurist. He’s unleashed our generals on ISIS in the Near East. He’s garnered more South East Asian support against North Korea than the United States has enjoyed in decades.

But what he’s done to the soul of the Republican Party is unforgivable. Anti-intellectualism, racism, prejudice, and protectionism are on the rise. Republicans are taking asinine positions on just about every issue as they try to remain consistent with Trump’s unscripted tweets. The RNC and RPV have tied themselves in knots trying to retain their integrity while supporting the new “leader” of their party.

“So, because you are lukewarm, and neither hot nor cold, I will spit you out of my mouth.” Revelation 3:16

I understand why you did it.

“I know why you did it. I know you were afraid. Who wouldn’t be? War, terror, disease. There were a myriad of problems which conspired to corrupt your reason and rob you of your common sense. Fear got the best of you, and in your panic you turned” to Donald Trump.

Now is the time to conserve the old principles and virtues of our great conservative tradition: liberty, capitalism, republicanism, federalism, community and family, compassion and individualism. The angry populists must be defeated, pushed out of our party wheresoever we can. These battle cries against the establishment have failed to produce a conservative alternative capable of governing and garnering the support of the American People. We must start over and try again, learning from the horrible mistakes of our recent past, and rededicating ourselves to principle and virtue over vengefulness and this incessant desire to burn everything to the ground.

Our neighbors are not our enemies. Liberty will never be built upon the foundations of intolerance and self-righteous Americanism. The laws of nature, like the laws of economics, do not care what people call themselves, nor do they care for geography. They respect only cause and effect. The logics of this world do not respond to idealism or wishful thinking, nor do they respond to prejudice. They are objective and impartial.

We have so much common ground with our fellow Americans. Sadly, Democrats, like the Republicans, are fueled by anger, hatred, and intolerance. They really believe that Republicans want to destroy America and Republicans really believe that Democrats want to destroy America. This is the great stupidity of our times. Any political party that hates half of this country will not remain in power for long. (Democrats, I hope you are paying attention). Any political party that fails to govern wisely according to the sciences of finance and public policy, will cause great harm to this country and will eventually reap what they sow. We are reaping what we sowed when  we nominated Donald Trump to represent the Republican Party.

Now, the Republican Party will return to the minority. The Democrats will once again try their hand at governing. If they govern according to their ideals, they will fail, and America will suffer. If they embrace the best wisdom of their time, they will succeed and remain in power. I find it hard to imagine that they will succeed.

Which means, the Republican Party must begin preparing for that moment when this country will be willing to give us another chance; and next time, we need to govern wisely and in accordance with reality. Leadership isn’t possible in a Democracy. In a Democracy, leaders simply follow the mob. In a Constitutional Republic, however, leadership is possible and leadership is necessary.

This Is The End was last modified: November 9th, 2017 by Steven Brodie Tucker
156 comments