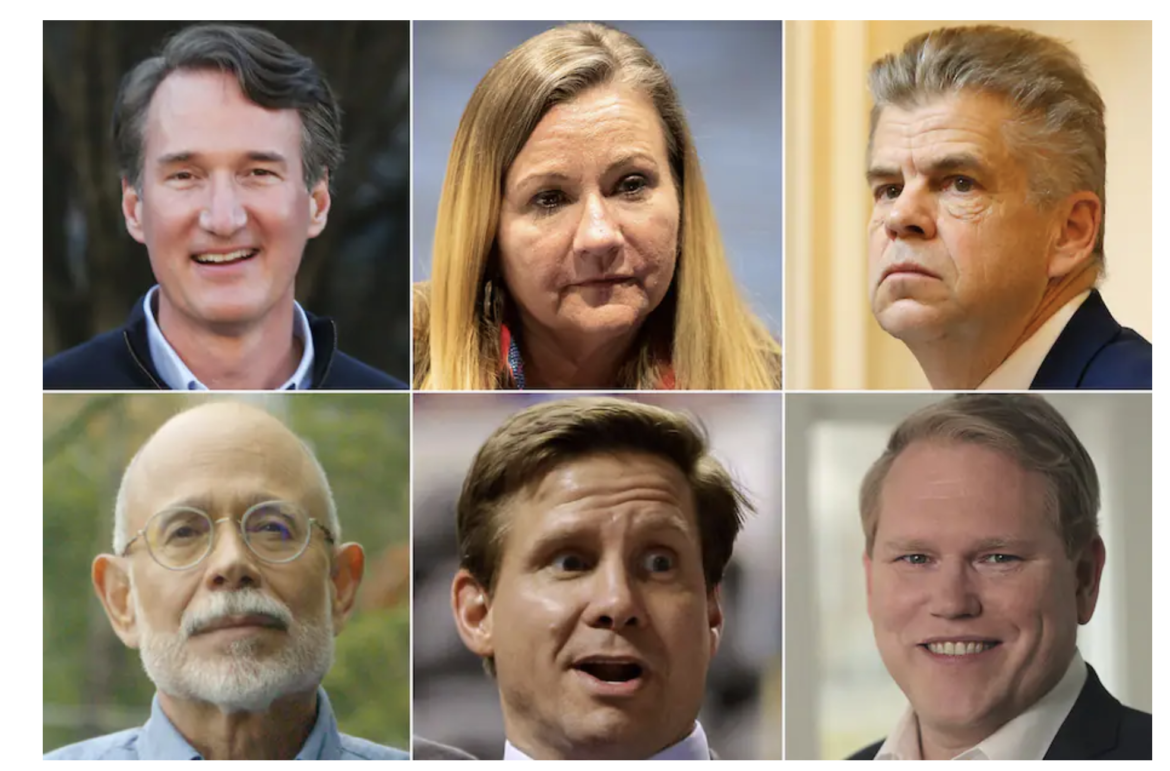 I’m a Libertarian-Conservative and have been active in the party since 2009. I was planning to stay out of this race, but people have been asking me for my opinion on how to rank the Republican Governor’s nomination. I had one person tell me that it would be nice for there to be an article like this. So in spite of my better judgment, I am going to give my thoughts on how to rank order the Republican candidates for governor. If it is of any passing help to you in rank ordering the candidates, then great! If you don’t like it, may a thousand flowers bloom!

In this GOP nomination contest, each nominee will need to have 50%+1 in order to become the nominee. This will be done via Instant Runoff Voting, in which each Delegate will be rank ordering their preferences for Governor, LG, and AG. With 7 candidates in the Governor’s nomination it is reasonable to assume that the winner won’t be determined until Round 4, or maybe even Round 5. If you are unfamiliar with how Instant Runoff Voting works, then please see this video for a good explanation.

What Instant Runoff Voting means is that you don’t just need to figure out who is your first choice or who your compromise choice is. You have to rank order all the candidates. And we have seven candidates in the race: Octavia Johnson, Sergio De La Pena, Peter Doran, Glenn Youngkin, Pete Snyder, Amanda Chase, and Kirk Cox.

I think the best-case scenario is that we have a candidate that can bring a bunch of new voters into the party and maybe close that gap by 100,000 voters. That would leave fewer voters that our next state-wide candidate would need to activate in the next election cycle.

What I think would be best in a governor candidate is someone who can grow the party and do their best to help down-ticket races. If not that, then the candidate should at least do “no harm” to down ballot races.

Cox is number 7 on my list because he is the easiest to describe as horrible to your average conservative. He wasn’t some random delegate who was arm twisted to vote for Medicaid Expansion. He was the guy doing the arm twisting. And that’s before we even get to the largest tax hike in Virginia history. With Republicans like this, who needs enemies?

Yes, he’s a really nice guy. Everyone that I talk to who knows him says he’s a really nice guy personally. No, that does not make up for the above. No activist wants to have to go door-to-door and defend Medicaid Expansion. I don’t care what your explanation is. The phrase “If you’re explaining, then you’re losing” comes to mind.

Chase is number 6 on my list because explaining why she is horrible takes a bit more time than Cox. I consider Chase and Cox to be opposite sides of the same coin. Whereas Cox is radioactive to the conservative base, Chase is radioactive to the moderate side of the party and to the donor base.

As an example, two years ago Amanda Chase decided that she did not want to caucus with the Republicans in the Senate. As a consequence of that, Republicans lost a seat in every sub-Committee. Chase was told this would be a consequence of her not caucusing with the other Republicans. She did it anyway. I asked her about this and she told me that it did not matter because all the Democrats vote the same way anyway. I could not believe this. Instead of leaving the caucus in the position where they just needed to peel off one Democrat to kill a bad bill something in Committee, she decided that it would be just as good to have to peel off two Democrats on every Committee in order to kill a bad bill. How many bad bills could have been stopped in the past two years, but for Amanda Chase giving an extra seat on every subcommittee to the Democrats? Like Cox, with Republicans like this, who needs enemies?

This is not the only thing she has done that causes me great concern, but it is perhaps the easiest to summarize.

To bottom line my opinion of Amanda Chase: I think that the establishment/moderate/donor class wings of the party have legitimate reasons to consider her every bit as radioactive as Conservatives find Kirk Cox radioactive.

And that has consequences down ballot. We are a coalition party and it’s not a good idea to nominate someone who is radioactive to one of the wings of the party. If either Cox or Chase is our nominee, then they both stand to suppress Republican turnout for House of Delegate races. I think that they would depress the Republican turnout differently in different parts of the state. Cox would cost us some seats over here while Amanda would cost us seats over there. I do not think we can take any district for granted. I don’t think we should take getting to 51 seats for granted. And I am not too particular about how we get to 51 seats, as we need to get to 51 seats so as to put a break on the Democrats madness. If we could get to 55 seats, that would be better, but I don’t want to see a minimum of 51 seats being jeopordized with either of these candidates.

These guys are pretty similar from where I am standing. Neither has ever held office before. Both have a lot of money at their disposal. Both are empty suits. Both have questionable issues in their past.

Youngkin can give a better speech than Pete. Youngkin has clearly done his research on current issues that may move the base. He comes across on the campaign as what you would expect out of a state-wide candidate.

Say what you will about Pete, but Pete has demonstrated loyalty to the Republican Party over the course of the past decade with his fundraising efforts. He has that point over Youngkin.

Which one harms down-ticket races more?

I don’t think either one of these candidates does more than the other to harm down-ticket races. Pete has his statements about Trump which are nicely crafted sound bites to drive conservatives nuts. Meanwhile Youngkin has his donations to the Southern Poverty Law Center and his memos to drive Conservatives nuts. Which is worse? I dunno. We could have a good discussion about that, but I think they come out pretty even in this regard.

Which one can do more for down-ticket races?

Both of these guys can raise more money and otherwise do less harm for our House of Delegates races than either Kirk Cox or Amanda Chase. Pete’s pockets are deep, but he’s not as good speaking as Glenn. Glenn has deeper pockets and is not likely to saying anything stupid on the campaign trail.

So how to order these guys?

I dunno. If it is just a matter of who has deeper pockets to help our down ticket races, then it’s Youngkin #4 and Synder #5. That said, I can also see the argument to rank Synder #4 and Youngkin #5. It might depend upon who offends you more and for what reason.

These are the three lesser known candidates. And if this was a regular race, then you might consider them spoiler candidates. But this is Instant Runoff Voting. Maybe the race will be decided on the 3rd ballot, but I’d bet on it being decided on the 4th or 5th ballot. So you can spend your first couple of votes voting for candidates that you genuinely like before you vote for your compromise choices. So why not consider them?

Octavia Johnson has demonstrated her commitment to the Republican Party over the past two decades. In that time she has run as the Republican nominee four times and earned herself two terms as Sheriff of Roanoke City. She has been a steadfast supporter of her local Republican Party and is well liked by both wings of the Republican Party locally. I can speak to this directly because I have been in the same local unit as Octavia since 2009. Disclosure: Octavia is a personal friend of mine and I have donated $500 to her campaign.

Octavia doesn’t have the weaknesses of the first four candidates we talked about. She is a Trump supporter, unlike Pete. She has two decades of being a solid Republican, unlike Youngkin. She isn’t toxic to either wing of the party, unlike Cox and Chase.

Octavia wouldn’t do any harm to down-ticket races for House of Delegates. The fact that she is an black woman may help in various districts for reasons that have nothing to do with policy, but everything to do with countering the usual leftist smears against anyone who would be a Republican candidate.

Sergio has a great life story. He was born dirt poor in Mexico, came to America legally, served in the military for 30 years, and he served in the Trump Administration as Deputy Assistant Secretary of Defense. Not only is Sergio a Conservative, but as a hispanic who entered the country legally and honorably served, he actively counters the the leftist narrative about Republicans and opens the door to growing the party like no other candidate in this race.

Like Octavia, Sergio doesn’t have the weaknesses of the first four candidates we talked about. I think Sergio as our nominee would really help grow the party and that would help our down ticket races. Similar to Octavia, the fact that Sergio is hispanic would help in various districts for reasons that have nothing to do with policy, but everything to do with countering the usual leftist smears against anyone who would be a Republican candidate.

He is business man who helped former Soviet Bloc countries rebuild their countries after the fall of the Soviet Union. He was busy last year recruiting candidates to run across Virginia. He wants to phase out the Virginia income tax completely. Candidates don’t casually mention wanting to eliminate the income tax.

Like Octavia and Sergio, Doran doesn’t have the weaknesses of the first four candidates we talked about. I haven’t heard him speak in person, but on policy he comes across to me as the candidate farthest to the right on economics. As far as having a candidate who has the greatest policy contrast with the Democrats, Peter Doran sounds like it.

How to rank Octavia, Sergio, and Doran?

I think a solid case can be made for all three of these candidates. I think they each have something that would uniquely help the overall environment for retaking the House of Delegates. I would absolutely fine going door-to-door for any one of them and would be happy to vote for any of them in November.

I think an excellent argument could be made to rank these three in any order for the first three spots on the ballot.

So that is how I see this race. The bottom tier of Cox and Chase that I think are absolutely horrible, a middle tier of Synder and Youngkin who are both mixed bags, and then a top tier of Octavia, Sergio, and Doran that I think we can make strong cases for.

Remember, we will be rank ordering these candidates. The race won’t be decided until three or four candidates have been dropped. With the spoiler effect removed by Instant Runoff Voting, we can vote our conscience before having to vote for our compromise candidates. So vote your conscience!