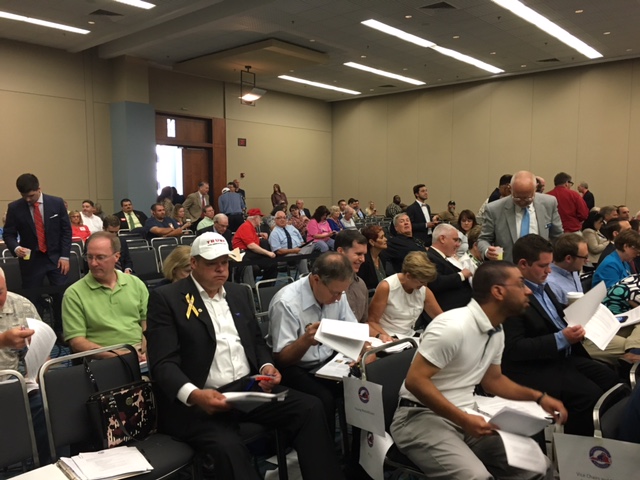 The marathon State Central Committee meeting on Saturday was one that will be remembered for a long time to come. As they say, an elephant never forgets. But, there is a time and place for everything, including healthy intra-party debates about who we are, what our goals are (or should be), and how best to get there. With an election looming close on the horizon, this is the time for talking about the things everyone can agree were good about Saturday’s meeting.

Our debate, with a couple of not-especially-notable exceptions, was civil and professional. Though people on different sides of each of the issues hashed out on Saturday clearly held their stances passionately, they did so in a way that was respectful of each other’s views and that maintained a good, collegial tone. Dennis Free and Eric Herr in particular merit praise for the leadership they displayed in this regard.

We also saw a lot of good avenues to build common ground between those of different backgrounds and viewpoints. (More on this below). But first, below are the results of the roll call vote from the latest installment of the Virginia GOP’s perennial dividing line: convention or primary?

What do the results mean?

First, digging just a little more deeply than the top line numbers, a striking contrast emerges between those folks whose seats are elected by the districts on one hand, and, on the other, those elected by (a) affiliated organizations; (b) by House and Senate GOP leadership; and (c) the State Central Committee itself.

(For those unfamiliar with the difference, each district is entitled to at least 4 seats, which are filled by district conventions. Districts that voted for the GOP presidential nominee get one additional seat, and those that are represented by a GOP congressman get one additional seat. These bonus seats are elected by district committees composed primarily of the GOP unit chairmen in the district, and the other State Central members from that district).

Of the 24 members not elected by the districts, only eight (33.3%) supported a convention for 2017. By contrast, those elected from the districts favored a convention next year by a vote of 32-to-26 (56% to 44%). Draw your own conclusions about the preferences of the respective power centers in our Party.

Second, the entrance of a candidate who feels like he could win in a primary but not a convention goes straight to the heart of that divide. Sen. Frank Wagner (R-Virginia Beach) wasted no time in jumping into the race once a primary was chosen. His record, and his checkered history in dealings with grassroots Republicans, would have made a convention battle an uphill race for him. But apparently he’s confident he has a chance when the biggest factor in winning is likely to be the ability to raise money to reach low-information voters–the folks who haven’t been paying attention. (Red flags should go up when a candidate doesn’t think he can connect with the activist base, but does think he can persuade the larger electorate).

Finally, the closeness of this vote, and the one last year, and the votes in years before that, all beg to be examined. Not in the sense that they’re somehow inaccurate or wrong. Rather, for what they say about our party.

Each of us on the State Central Committee represent a constituency of Republican voters (some more directly than others). We each have a preference on nomination processes that probably tracks closely with a majority of our respective constituents. That means that every time we make this binary choice—convention or primary—one big chunk of our Party feels a sting and walks away skeptical of the integrity of the process.

For the pro-primary folks, when a convention is chosen they have concerns about the efficiency of the process and the difficulty of participation by a broader electorate. When a primary is selected, the pro-convention crowd worries about the nominee not reflecting the real will of the Republican base, and that instead the nomination will simply be bought by the candidate with the most name ID or the largest bank account. We also have concerns about primaries often favoring whichever candidate benefits by participation of Democrats and others who cancel out the preferences of actual Republicans (see, e.g., Sen. Emmett Hanger).

But there is a lot of ground between a primary on one side, and a convention all the way on the other side. We already have party canvasses (aka firehouse primaries) as an option, which addresses the arguments about participation of non-Republicans, but what else are we missing? What other creative approaches can be taken that allow adherents of both philosophies to feel comfortable with how we’re nominating our candidates?

There certainly seems to be some appetite for finding out. In recent weeks I’ve heard ideas and discussions from folks in all wings of the Party about this. Sixth District SCC Representative Anne Fitzgerald has been pitching an initiative to study nomination processes in other states to see what might work better here (e.g., in Utah, where they use a hybrid convention/primary approach). 10th District Representative Puneet Ahluwalia and I discussed the same type of thing on Saturday. [UPDATE: Great minds think alike! My friend Daniel Bradshaw makes the case for caucuses here.]

One thing is certain, though, and that is that our constituents all deserve for us to do what we can to improve how we do business. Right now we spend an inordinate amount of time fighting over process. Mind you, I think these fights are important, as it gets to the heart of who we are as a party.

But wouldn’t it be nice if we were able to spend less time and effort on process and more time on beating Democrats? Finding a process that addresses both sides’ concerns would help us do that. I’m open to suggestions.