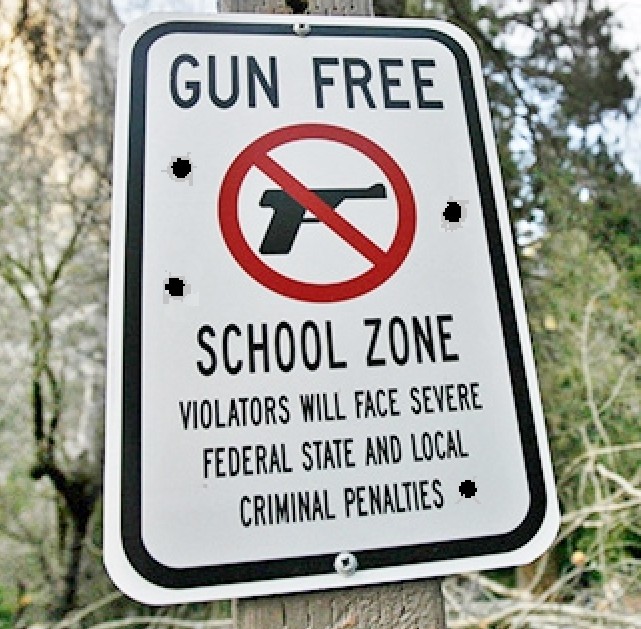 I wonder how many of you know anyone related to a school mass murderer.  I do.  As a result, discussion of the whys and wherefores of these mass murder events is not new to me.  However, there are a few specifics that are relevant to the discussions of the recent mass murder in a Florida High School.

Probably the most utterly ignorant idea is advertising that a school is a “gun free zone”.  This is the equivalent of “shoot here first”.   Anybody intent on massive violence doesn’t want a firefight, they want a slaughter with minimal risk.  It would be far better to post no sign or even a sign that says “Armed and Willing to Shoot” even if there is no ability to fight.  At least create some uncertainty in the minds of a killer.

A passive response is not a defense.  There seems to be this idea that a perfect defense can be created against assault.  The history of warfare is that every defense can eventually be overcome and every offense can eventually be defeated.  These various school mass murderers find ways to overcome school defenses.  The Florida shooter was knowledgeable of the school, knew when the fire drill was going to occur, knew that said fire drill created the cover of chaos, knew where students would be concentrated for killing, and, finally, that there were only a couple of security guards to protect an entire campus of thousands of kids.  In other words, the shooter might be crazy but he wasn’t stupid.

With modern technology, violent video games can be used to pre-plan and pre-test massacre plans.  The military uses simulation and gaming to plan for various raids and attacks, and this technology has made its way into the civilian, particularly teen and young adult, video world.  The gaming is now so sophisticated that team against team warfare is possible.  Then add to this the untended side effects of psychotropic drugs and you have a prescription for mayhem.

By the way, the federal government could sponsor a Strategic Defense Initiative for the defense of schools and mass event situations.  The advance of all kinds of survival and situational defense technologies would likely solve some problems and would also lead to another massive improvement in the business climate as it did during the Reagan years.

The politics of school shootings prevents real solutions to the mass murder problem.  The left has for decades pitched gun control, but not solutions to gun violence.  Their assault on the right to self-defense has turned guns into evil mystical things and gun owners into hateful beings. Their intent is to disarm Americans and place all weapons in the hands of the State even though a cursory review of history shows this results in enslavement.  The left with its social justice advocacy is an undeniable threat to the Second Amendment to the Constitution.

After the Virginia Tech mass murder, I called the Attorney General of Virginia to offer some ideas. My basic point was that an active defense involving concealed carry in the schools was needed to augment professional security.  Logically, a security guard is the first target of a shooter.  He or she is visible if dressed in a uniform and, if taken out in the first stage of an attack, can be a source of additional weapons for a shooter.  To be blunt, the idea of concealed carry in the schools went nowhere – then.

Many states, realizing that the “gun free zone” idea doesn’t work, have decided to train teachers and administrators in the use and care of guns and allow them to conceal carry for defense on school grounds.  Is this a perfect solution?  No.   Some teacher or administrator just might experience a mental break.  Some student gang may try to steal a gun from a teacher.  Some teacher may shoot and miss.  All of these are possible but not certain.  What is certain is that a “gun free zone” is an invitation to mayhem and useless in the face of a determined school mass murdered.