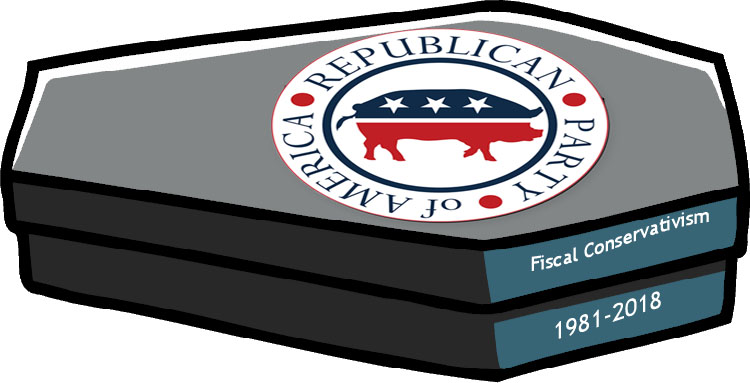 “Thrown under the Omnibus,” or “The end of fiscal conservatism…”

It’s always easier for electeds to cut taxes, but not spending.

One wonders how the economy is going to handle the recent tax cuts and this increase in spending.

But despite the protests and finger-pointing, the sad reality is that fiscal conservatism and the 1980s mantra of “spending cuts before tax cuts” is not only out the window in Washington, but in Virginia, too.

It is easy for national politicians to cut taxes and just let deficits balloon.  On the local level, where we have to have balanced budgets, the game that is played this time of year is to cut the rate on local property taxes, but if your home or building value increases, your tax bill is higher.  Most of Virginia is growing nicely, so we do not have too many situations where police officers and teachers have to be laid off. State government keeps growing, too!

In my 10 years serving in local office in Loudoun County, I can only remember two times when spending was cut – and that happened with Democrats in control, not Republicans.

In 2009, a Democrat-controlled Board of Supervisors was forced to cut some $40 million out of the Loudoun County operating budget due to the massive drop in home values following the real estate and market collapse of 2008.  Staff was cut and even a pet project of liberals, the Loudoun Museum, was hacked from some $200,000 a year to $50,000.

The following year, in Leesburg, our then Town Manager, John Wells, proposed a lean budget that led to layoffs of staff, too – including the director of the Leesburg Airport.  Our council was split three Dems, two Republicans (including me) and two Independents, but we agreed to the cuts and kept the tax rate low.

In most other years, I found it next to impossible to get folks on the Council or the Board of Supervisors to cut anything I was even mocked when I seconded motions by my colleague, former Sterling Supervisor Eugene Delgaudio, to cut things.  It is very, very difficult for politicians at all levels of government to go “against staff.”

Here are other reasons why it is so hard for politicians to cut spending:

Another example.  Dog lovers and bureaucrats wanted a $15 million animal shelter to replace one that is in the rural west of Loudoun, but in a hard-to-reach area of Leesburg.  I got a majority on the board to look at existing buildings to rehab in Eastern Loudoun, closer to the populations the shelter would serve.  Supporters of the new shelter on our –all Republican Board fumed.  But staff identified some buildings that could work.  None of the owners, however, were contacted to see if they would be interested in selling.  So, the Board _ voted for the $15 million shelter

Now, imagine how hard it is to get a majority in a 100-member House of Delegates 435- member Congress, to cut something?

For example, in 2009 and 2010, I tried to get the Town Council to cut funding for the Thomas Balch Library, a former county library that Leesburg took over in 1993 and turned into a “genealogy and history library.” Over the years, its staff grew to five full timers and four part-timers and a budget of $450,000 a year, about 1 cent on Leesburg’s tax rate of about 19 cents/$100 of assessed value.  However, this library gets fewer than 20 patrons a day, most of whom do not live in the town. No federal, state or county aid is available. So, the library director, worried about losing her job, mobilized the “Friends of the Thomas Balch Library” to breath down the Council’s neck. It was never cut. In fact, the Library was bequeathed about $700,000 from a wealthy volunteer in 2009 and the money has not been used at all. The council will not step in either.

I don’t mean to cast myself as the lone fiscal conservative in Loudoun.   But the reality is that it is very hard to get politicians to cut programs or staff unless they are pressured to do so due to a failing economy or if the bureaucracy gives its blessing.  In DC, future generations will pay for this debt through higher interest rates. And the debt in Loudoun and other Virginia cities and counties is growing, too.

So, fiscal conservativism is dead and to borrow from  P.J. O’Rourke,  we’ve all been“thrown under the Omnibus.”

“Thrown under the Omnibus,” or “The end of fiscal conservatism…” was last modified: March 26th, 2018 by Guest Contributor Ken Reid
24 comments