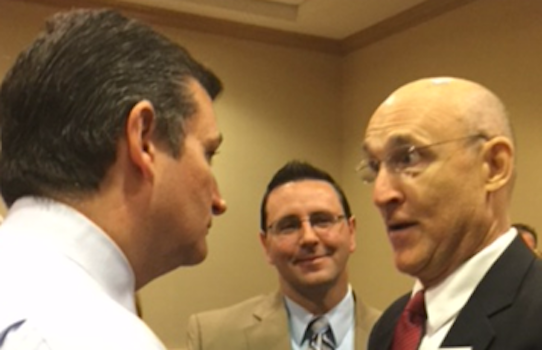 Republicans have virtually no influence on public policies in the county, including those that have significantly raised property taxes, changed sex education and gender practices in the county’s schools, and failed to fix the county’s heavily congested roads. The county is living with failing Democrat solutions to these problems.

Moreover, underperforming Republican turnouts in our county of 1.1 million people have been the deciding factor in Democrats winning all statewide elections for the past six years. Democrats now fill all five statewide elected positions—governor, lieutenant governor, attorney, and both senators.

Just as ominously, Barack Obama carried Virginia in 2008 and 2012 because he won the Fairfax county vote so decisively.

Right now, the Republican status quo in Fairfax County is not working. The FCRC provides few, if any services, to Republican candidates. The county will continue to suffer Democrat wins in local, state, and national elections unless the FCRC changes its approach.

My vision is to organize, staff, and lead a reinvigorated district/precinct-based FCRC that decisively helps candidates supporting the Virginia Republican Creed to win elections and return county and state governance to Republicans.

To paraphrase the Creed, our Party believes faith in God is essential to the moral fiber of our community and nation. The FCRC will stand for family values. We will support limited constitutional government that protects individual rights, the rule of law, and fiscal responsibility. And we will promote free enterprise that promotes equal rights, justice, and opportunity for working men and women.

Shifting dramatically from the current FCRC approach, my plan is to:

1. Aggressively recruit “an army” of volunteers to establish a district/precinct-focused structure that supports and empowers leaders at those levels to get out the Republican vote. It’s time to encourage, elevate, and recognize grassroots leadership. Currently less than half of the 234 precincts have Republican captains.

2. Vigorously and systematically engage traditional and non-traditional GOP voters. To turn out Republican votes effectively, each precinct needs a minimum of 10 volunteers. That means we need an organized campaign to recruit 2,500 volunteers—no more tinkering around the edges recruiting oneseys and twoseys.

3. Implement a much-needed voter tracking application containing data that volunteers can use year-over-year to turn out a high percentage of the Republican vote. Current voter data and data systems are candidate-centric and lack update continuity and refinement.

4. Promote and fully defend the Virginia Republican Creed as the basis for FCRC’s messaging. If candidates don’t endorse the Creed, they should not get the FCRC’s endorsement. The “new FCRC” will use the Creed to determine FCRC positions on specific issues.

5. Raise funds aggressively to support candidates, eradicating the current 3:1 fund-raising advantage currently enjoyed by the Democrats. By demonstrating the FCRC stands for something, offers valuable services to Republican candidates, and delivers electoral results, the FCRC can, and will, out-fundraise the Democrats in the county.

A vote for the current FCRC leadership is a vote for continued electoral defeat.

The FCRC needs a fresh, bold approach that strengthens the Party’s organization, recruiting, messaging, and fund-raising to end the Republican Party’s electoral malaise in Fairfax County.

We will retain our current Republican seats and move forward to win more, with excellent candidate recruitment. We need to replace Gerry Connolly, regain the School Board majority, and take back the Fairfax County Board.

I’m running for FCRC Chairman to lead that effort. As FCRC Chairman, I will ensure all Republican candidates who support the Virginia Republican Creed receive critical services from the FCRC that will materially help them win elections.

For more information about my candidacy, see my website.

Tim Hannigan is a retired Marine Lieutenant Colonel and former defense contractor executive.  He is currently editor of the Fairfax Free Citizen, and has served as a GOP Precinct Captain in Fairfax County, a member of the Fairfax County Republican Committee, a board member for the Fairfax County Taxpayers Alliance, Policy Director of the Virginians for Quality Healthcare, and Communications Director for the Virginia Tea Party Patriots Federation.
Tim Hannigan: Why I’m running for Fairfax GOP Chairman was last modified: February 5th, 2016 by TBE Staff

Saw him at a meeting in Richmond in Richmond. He’s amazing. NOVA needs more like him. Good Luck, Tim!

Reply
Facts and Experience Beat Hope and Change: A Response to Tim Hannigan - The Bull Elephant February 11, 2016 at 11:29 am

[…] February 5, my opponent in the race for Chairman of the Fairfax County Republican Committee (FCRC) posted here on The Bull Elephant and on his own newsletter site his reasons for running. I’d like to thank TBE […]

I wish you well. Whatever is currently going on isn’t working. All the points are good and valid. Republicans are losing so badly in Fairfax it is pulling down the whole state. Even if we lose by less it will make a big difference. Take that hill.

Agreed. We need to stop the bleeding in NOVA if we want to win the governor’s mansion in 2017.