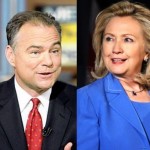 David Catanese is reporting on U.S. News and World Report that Senator Kaine will be endorsing Hillary Clinton for president while he is in South Carolina this weekend.  This endorsement comes 21 months before the election, which is pretty wild. Tim Kaine has a penchant for early endorsements. He was one of the first elected officials to endorse Barack Obama in 2008.

Apparently Kaine has no issues with Hillary’s involvement in Benghazi. Kaine told Bloomberg last year, “I do not think it’s a scandal. It could be an embarrassment.” He went on to say that he didn’t think it would hurt Hillary’s changes if she decided to run for president.

It is shameful when you call the unnecessary death of our brave military men simply an “embarrassment.”  Clinton didn’t think it was a big deal either, so I guess they are two peas in a pod.

Tim Kaine to endorse Hillary for president was last modified: May 2nd, 2014 by Jamie Radtke

Hello Jamie, I voted for you in your Senate primary!

Now, I am going to report that with 30 months to go, the Republicans have absolutely no one to run against President Hillary in 2016. Bill’s most likely going back, this time in the number 2 slot.

The Republican Candidate for Vice President is reserved for Gov. Martinez if she accepts it, but Pres is a no show up until now. The Republican’s would be stupid not to have a woman on the ticket. I can see no way Hillary can lose in’16 if she is in good health. She may decide she does not want it.

Not only do the Republican’s not have an electable candidate yet, more importantly, they do not have a viable agenda. Other than more of the Pres. Bush ’43 agenda.

I suspect that ole Timmy was just slathering on the Chap Stick, hoping to get a future gig under ole “What does it matter”. As a Senator, he seems to be about as effective as he was as Mayor and Governor – meaning he’s just taking up space and using good air. Another empty suit, in my view.

I think Kaine may have opened his big mouth just a bit too soon because now that Boehner grew a spine and announced the select committee, she’s going to have a lot of questions to answer……and this time, throwing a fit and yelling “what difference does it make” isn’t gonna cut it!! That woman did that at a Senate hearing (basically nothing more than grandstanding with soft ball question at the end)……if it’s true that Gowdy is going to head up the committee, she’ll be throwing herself on the ground trying to get a concussion again!!

Good point! It is true, Gowdy will chair, see the post, http://thebullelephant.com/bull-elephant-gets-results-eric-cantor-calls-select-committee-benghazi/