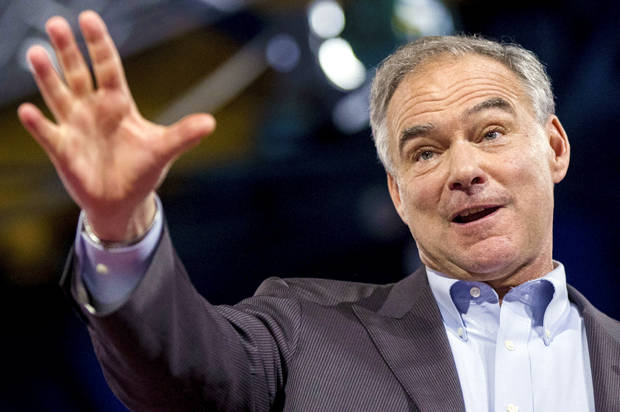 It is never a good thing when the vice-presidential candidate for the Democratic Party starts publicly praising the opposition Republican leader in the Congress.

But such is the case as newly nominated VP candidate Tim Kaine (D-VA)  effusively went out of his way to make clear that he, and presumably presidential candidate Hillary Clinton, saw Speaker of the House Paul Ryan (R-WI) as someone they could do business with on a large variety of issues if they win the November election.

Of course, why wouldn’t they? Speaker Ryan has folded like a cheap suit on everything that President Obama has thrown his way. It is hard to see that the Republican leader could be any more compliant and submissive to a Clinton Administration than he has already been to the Obama Administration.

The real question is about the Republican majority in the House; will they continue to spinelessly follow the Speaker over the cliff of irrelevancy – where the “People’s House” continues to reject its Constitutional responsibilities and obligations for oversight and appropriations?

And, regardless of the upcoming national elections, will the Republican majority in Congress capitulate in the “lame duck” session between the election and the new Congress in January, on major issues such as immigration “reform” and the Trans Pacific Partnership (TPP), just to satisfy their major donors?

Senator Kaine noted approvingly that Speaker Ryan had been an enthusiastic and ardent proponent of open borders immigration reform, amnesty for illegal aliens already in the U.S. and sanctuary cities. (In addition, Rep. Ryan is an apostle for the “willing worker” concept of open competition for all U.S. jobs by foreign workers, using the visa system.)

As Brietbart News’ Julian Hahn noted this past December, the Speaker pushed through the Obama spending bill largely untouched and fully funded the President’s expansion of refugee resettlement, sanctuary cities and even fully funded executive amnesty.

The one bright spot in all of this is that the Speaker is being challenged in his Wisconsin Congressional District by a feisty business executive, Paul Nehlen who is raising these hard questions for the voter’s in Wisconsin “1.”

Whatever the outcome of that contest, the question for the rest of the House members remains; what will you do? Will you continue to line up behind the Speaker and continue to appease and fund the radical Democrats; will you capitulate in the lame duck session – especially if Donald Trump wins – and push through open border immigration policies and sign off on TPP?

Where does your House member stand? Now is the time to ask.

It isn’t called the Uniparty for nothing.

When the politicians collude with the Party that clearly doesn’t represent the interests of the citizenry, said politicians should be shown the door. I don’t want chummy. I want my interests as a citizen to be protected.

Democrat executive and republican speaker working together to accomplish something? Haven’t seen that in a while! http://www.washingtonpost.com/wp-srv/politics/special/welfare/stories/wf080196.htm

I don’t believe Sen. Kane will be called on by the Hillary team to carry any heavy loads in the upcoming presidential run so he might have some free time to make some “get out the vote” appearances for Speaker Ryan in his WI primary run, I’m sure Paul Nehlen won’t object as it saves him some campaign cash rather then putting up more statewide billboards that in effect claim the same thing Sen. Kane is stating publicly.

Interesting there has been little to NO polling on this race since mid-May when the Ryan people splashed a poll showing him up 70 points in his primary contest but since then dead silence. When ever I need a political chuckle I go and read I few excerpts from that riveting Cantor/Ryan/McCarthy political blockbuster “The Young Guns” or a lesson not learned regarding writing memoirs when your career (or lack thereof) is still in front of you and the self labeling of your political positions is one outrageous and easily dismissed public lie.