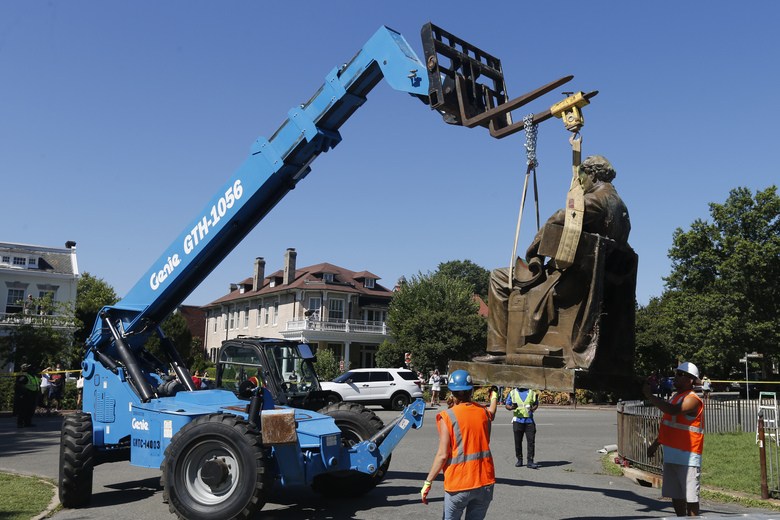 Time for the Mayor to Clear the Air

Three years ago, the Richmond Times-Dispatch published an article headlined thusly: â€œBaltimore paid less than $20,000 to remove four Confederate monuments last month. So what does that mean for Richmond?â€

Richmond Mayor Levar Stoney and then-Gov. Terry McAuliffe had estimated that it would cost more than $5 million to remove five Confederate statues from Richmondâ€™s Monument Avenue. They argued that such a large sum would be more productively spent on city schools.

After conducting a Freedom of Information Act request, the RTD discovered that the City of Baltimore had paid a contractor $19,364 for â€œmonument removal and storageâ€ of four Confederate statues. The contractor put the statues in a city storage lot and covered them with tarps. To address security concerns, the city had the statues removed overnight with no advance notice.

The RTD article seems especially relevant today as Stoney, running for re-election, defends his decision to pay a campaign contributor $1.8 million to remove four statues: of Jefferson Davis, J.E.B. Stuart, Stonewall Jackson, and Mathew Fontaine Maury. The circumstances in Baltimore and Richmond were not identical. The Richmond statues were larger than the Baltimore statues. Stoney was acting during a public emergency punctuated by violent protests. No Richmond contractor was willing to undertake the job, and the mayor had to look out-of-state for someone to do the work.

But when the cost differs by a factor of almost 100, Stoney has some explaining to do. Especially when he ignored Richmond and state procurement policies to award the contract to a dummy corporation set up by Devon Henry, a campaign contributor.

Since breaking the story about NAH and Henry winning the contract, Baconâ€™s Rebellion has received repeated feedback from people in the construction industry expressing astonishment at the price paid to remove the statues. Multiple sources have suggested that the job could have been done for roughly $50,000, even taking into account the special circumstances. None were willing to go on the record, however, and anybody speaking anonymously can make any claim he wants to without accountability, so their assertions have limited value.

Thatâ€™s why the Baltimore contract, long forgotten as the statue controversy has unfolded in the three years since, is important. It provides a real-world benchmark of what it costs to take statues down, move them, and store them.

Another potential factor was security. Baltimore officials resolved the security issue by acting in the dead of night. By contrast, the cost of removing Confederate statues in New Orleans escalated from an initial cost of $170,000 to $2.1 million. Death threats were made, and the initial contractor pulled out of the deal after his car had been set on fire. Henry, owner of minority construction contracting firm Team Henry Enterprises, dealt with the security issue in two ways. First, he preserved his anonymity by setting up NAH LLC as a dummy corporation to transact the deal. Second, the contract contained the following provisions that put the onus for crew safety on the city.

The primary cost escalator in the Richmond contract was the necessity of hiring an out-of-state firm willing to do the work. Henry procured the services of a Connecticut firm, Smedley Crane & Rigging, as well as a local artist and welder.  The contract called for bringing the out-of-state team to Richmond and keeping it on standby for up to five days until Stoney gave the go-ahead to commence removal. In other words, the city had to pay the crane & rigging crew even when it was idle, and also had to cover food and lodging. Many observers have suggested that those provisions might have added at most a couple hundred thousand dollars in expense. Some have suggested that NAHâ€™s profit margin on the contract was in the realm of $1.5 million.

Such conjectures are unprovable, given the limited information that resides in the public domain. However, the ability of the City of Baltimore to get a very similar job done for $20,000 suggests that Stoney extravagantly overpaid in a no-bid contract.

City Councilwoman Kim Gray, who is running against Stoney for mayor, has written Colette McEachin, Richmondâ€™s commonwealthâ€™s attorney, requesting a â€œcomplete and immediate investigation into the facts and circumstances surrounding this matter to determine whether any laws or emergency procurement rules were violated and whether any criminal charges are warranted.â€

Meanwhile, citizens should press Stoney and Henry for details of the costs incurred in execution of the contract. Stoney is under no legal obligation of which I am aware to provide an audited breakdown of NAH LLCâ€™s expenses, but citizens are perfectly justified in asking for one. The no-bid deal between Stoney and a financial backer appears to have been obscenely profitable. Itâ€™s time to clear the air.

Time for the Mayor to Clear the Air was last modified: August 28th, 2020 by Guest Contributor James Bacon