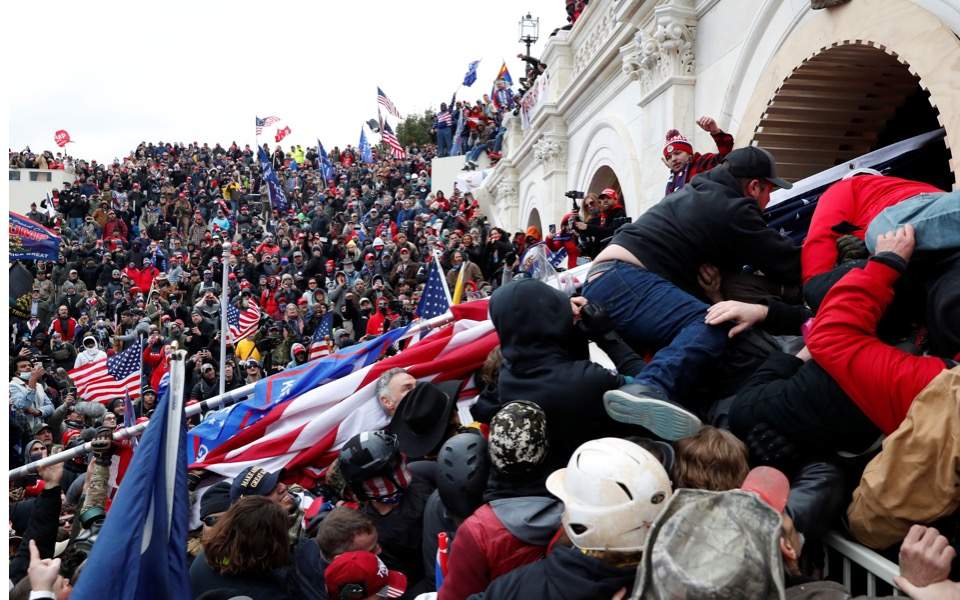 “The life that counts must toil and fight,

Must hate the wrong and love the right,

Must stand for truth, by day, by night…

This is the life that counts.”

This poem was given to me by my father many years ago.  It has been sitting in my office for longer than I can remember.  I have tried to live my life by this standard in both my words and my actions.  It reminds me of Christ’s sermon when he called his followers the salt of the earth.

Salt is used to purify and cleanse.  In this way Christ was telling people they must always stand for truth, because once you start to believe and repeat lies you are “no longer good for anything, except to be thrown out and trampled underfoot.”

Any movement that is worth fighting for and standing for MUST have, at its core, an unwavering adherence to the truth.  Any movement built on a foundation of lies will inevitably collapse into chaos and violence.  This is exactly what we saw happen on Jan. 6th when Proud Boy and Q-Anon agitators, egged on by Donald Trump himself, spurred Trump supporters into a violent mob that stormed the Capitol and attempted to overthrow the legitimately elected government of the United States.

As sad a sight as that was, it has been just as sad to see, hear, and read the excuses being given by talking heads, elected leaders, and influential figures on the right about how we need to understand what these rioters are going through.  Listening to Tucker Carlson on Wednesday night talk about how we need to “feel the pain” of the rioters made me think about Andrew Cuomo saying the exact same thing (nearly word for word) about the BLM riots last summer.  Hearing Laura Ingraham talk about how the events of the day were “mostly peaceful” took me straight back to the CNN reporter standing in front of a burning building talking about the “mostly peaceful” protests going on in whatever city he was in.

The attempts at shifting blame and victimization of the violent mob was no more pathetic then than it is now.  I thought Republicans believed in personal responsibility.

Let me ask you a question.  Just what do you think would have happened had this insurrection attempt been successful?  How would this country have moved forward if this mob of miscreants had reached Mike Pence, Nancy Pelosi, and AOC, placed them in the zip-tie handcuffs that were brought into the capitol, and led them outside to the gallows that had been erected to be hung for “treason against Trump?”

This is a serious question.  I want you to try and think through the next few moves.  How, after shredding the Constitution, is Donald Trump then reinstalled as President?  Would the expectation be that Democrats and liberal agitators would just shrug their shoulders and say, “rats, Trump won again,” and prepare for the 2022 midterms?  Would we even have elections again, or was the idea to just install Trump as your sovereign to be succeeded by Don, Jr. someday?

Most serious people who know better never considered these questions because they were sure it wouldn’t happen. Even the ones peddling lies to decent people desperate for hope didn’t believe the stolen election con for a single second.  They knew it was all some elaborate performance art.

Unfortunately, millions of people who don’t know better believed them.  They have been convinced that a vast left-wing conspiracy was able to cast or switch millions of fraudulent votes to prevent Donald Trump from winning re-election.  They believe this because that is what they have been told by people they have trusted to tell them the truth, and they have been lied to.

A day before the insurrection I wrote about how the people who know better are failing us.  I never dreamed that piece would be so prescient, and so immediately validated.  America is now reaping the results of idolizing and trusting leaders who ultimately proved to be self-serving and dishonest.

Moral Authority can be defined as “authority premised on principles, or fundamental truths, which are independent of written laws.  As such, moral authority necessitates the existence of and adherence to truth.” Webster’s defines it as “trustworthiness to make decisions that are right and good.”  Moral authority is vital to inspire people to live decent lives.

By using lies and fear to stoke an insurrection, Donald Trump and his followers have cost the Republican party and the Conservative movement the last shreds of moral authority we had left.  If we want to have a chance to lead this country back to a righteous path, we need to begin the hard work of earning that moral authority back, but it’s not going to be easy.

The first step is going to have to be a complete repudiation of the outright lies that have led us to such a humiliating low, even as some want to continue the lies and the excuses.  On this very blog Trump apologists are writing posts repeating the hallowed lie of the stolen election. They are repeating the completely discredited lie that it was Antifa, not Trump supporters, that stormed the Capitol.  These actions reveal either a knowing, malicious desire to perpetuate fraud, or a zealous idolatry that has lost all capacity for the discernment of truth from fiction.

Never forget that for some on the right, Jan. 6th, 2021 was their “shot heard round the world.”  For all their talk about being patriots and defending the Constitution, they are ready to shred it in order to maintain power.  Sadly, there are people on the right that are hungry to start an actual shooting war over partisan politics. A 70-year old Alabama man brought 11 homemade Molotov cocktails to D.C. for the Trump rally. This is not a man preparing for a “peaceful protest.” This is a man ready to kill, burn, and destroy for his cause. This is not the end of the violence.  This could very well be just the beginning.

Unless we stop it.

In the same sermon where Christ called his followers the salt of the earth, he also called them something else.  He called them the light of the world.  He called on them to “let your light shine before others, that they may see your good deeds and glorify your Father in heaven.”  Christ is telling us that as Christians, we need to set an example of how to behave that others can look to and follow.  It means that Christians must always present an outward model, not just in our words, but in our deeds, on what it means to be a Christian.  I am constantly telling my children to set the example of how a good and decent person behaves, because you never know who or when your behavior may influence someone else, for good or for ill.

For far too long there have been people calling themselves Christians who have not set that example and have actively led good people astray.  There are people that have tried to maintain personal power or enrichment using lies and fear.  Lies and fear are tools of the devil.

My sin is that I have stayed publicly silent for far too long.  Oh, I have grumbled in private, to which many people can attest, but for years I have stayed silent simply to keep the peace, or to keep from offending friends.  I took the easy path to avoid conflict.  All the way back in 2017 I thought, “what’s the worst that can happen?  He’s going to be gone in 2021 anyway.”  Well now I know, and I will be silent no longer.

It’s time for the Republican party to stand for truth, decency, and integrity again.  We must acknowledge our sins and our failures and ask God for forgiveness.  We must reject prideful self-righteousness and ask God for wisdom and humility, that we can discern truth from lies.  We must do the hard work of leading people back towards a righteous path, and shine as beacons of light in a darkening world against the forces on all sides that seek to lead our country to ruin.  Only then can we regain our lost honor.  Only then can we earn back the moral authority we have so carelessly discarded.

To those like me who have stayed silent to keep the peace, it is time to make your voice heard.  It’s time to let others know that they are not alone, that we are in fact the silent majority in the Republican party and the conservative movement.  Your voice will help give courage to others to speak out against the lies.

Stand for truth, by day, by night.  Because that is the life that counts.

Time to Stand for Truth was last modified: January 11th, 2021 by Mick Staton