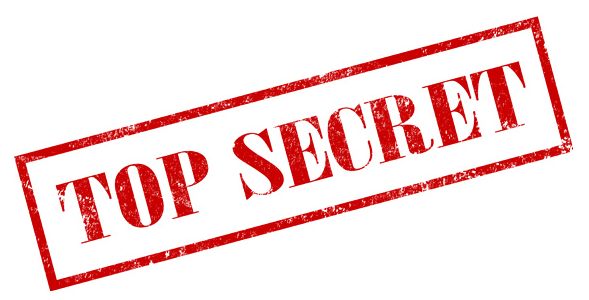 When I heard Hillary Clinton claim that she did not know what “C” meant on a “Confidential” e-mail on her private server, I was alarmed. Logically, she would also claim that she didn’t know what “S” or “TS” meant or, in other word, “Secret” or “Top Secret”. To make matters even worse, she would probably claim not to know what “NO FORN (Foreign)” meant. Anyone who believes her claims of ignorance regarding the significance of classification is an “I” for idiot.

The situation, however, is actually even worse than not knowing “C”, “S” or “TS”. There are national secrets and human assets so important that “Special Access” is needed, and only a select few are given “need to know” clearance.  I ran into a “Special Access” situation with what was called a letter designation program.  My boss at the time, a Navy Captain, said that if I didn’t know what the letter meant then I had no business trying to know.  This was very disconcerting because I didn’t know whether the information contained within the letter designation program was relevant to my area of expertise in nuclear, biological and chemical (NBC) defense.   It became a rather interesting drill reducing the classification to something that was useable for program purposes.

Then there are ticklish situations.  For example, I received information from the CIA.  They wanted to know what I thought about the information.  I told them everything provided was available from commercial sources and was not unique or of particular use.   Well, the fact that the CIA provided the information was a problem in that it exposed their interest in that particular area of technology.   To protect the CIA, I destroyed their information by shredding it and placing the remains in a “Secret, No Foreign” burn bag.  After that, if they wanted me to look at something, I went to the CIA headquarters or the Pentagon.  By the way, the Defense Intelligence Agency (DIA) also had an interest in the CIA information so parochial challenges had to be dealt with.

Here is the bottom line:  Hillary isn’t incompetent, she didn’t make a mistake, and she abused national security.  She is a liar and a crook – and under normal circumstances would likely face life in prison.  Of great significance, she knew exactly what she was doing in establishing a private personal server to conduct pay for play and money laundering activities that would make the Mafia proud.

Hillary figured she would never be caught.  Unfortunately for her, and very fortunately for Americans, the emails containing various levels of classification were leaked.  As far as national security is concerned, this is not good news as America’s secrets and people’s lives are now in the hands of not only Wikileaks but virtually every country that has an interest in the geopolitics of America’s leadership.

Donald Trump is right on the money when he calls her “crooked Hillary”.  The only additional question is who else is part of her gang of crooks.

If the iconic Republican Lehman endorses Hillary, who are we to object? Besides, Clinton has said that there was nothing marked “Classified” in any of her emails. When is the deplorable wing of the GOP going to stop picking at scabs?

Put it in your mind already. On a cold January day, the new president will face the crowd, slowly nod her head as she looks down her nose at the true believers, opens her mouth and in that highly irritating voice, yells. YEESSSSSSS!

But you won’t see it. Because your TV will be off. Your mind unable to contain the rage as you reflect on all the Republican leadership that went out of their way to dump their party’s candidate. The only question left on that cold January day? What are you going to do about it?

My rage will be for the no-nothings who gave us a bloviating megalomaniac as a candidate.

They are all megalomaniacs. Some just hide it better than others.

This is not about Hillary or Trump, it’s about the Republican Party. I say screw both party’s. Trying to sneak this BS through while the media is occupied is crooked Republican politics.

Go ahead, sue, I will laugh while I put an X next to Clinton in the voting booth.

Oh good, now we know who to blame for the next 4 years. Everything you are accusing Republicans of doing, Democrats do the same thing, except it’s higher and deeper.

Yes, you can blame the greedy communist American corporations.

It’s long overdue that we title companies that operate in Communist China, build massive factories there, and suck the life blood out of the American economy as communists.

Egads. Who ever said that people should vote selfishly for their own pocketbook and self-interests?
What ever happened to voting the Constitution?
Do you play “finder’s keepers, loser’s weepers” with lost wallets in addition to voting for duplicitous, double-dealing Hillary, RRIII?

Egads to you! Whoever said people should vote to make the rich richer? The Constitution? It doesn’t work because it was written for honest people, not crooks.

John Adams said;
“Our Constitution was made only for a moral and religious people. It is wholly inadequate to the government of any other.”

I vote for populists interests. I don’t care about titles anymore. They’re all crooks.

Your precious Obamacare has done more to increase health insurance costs than cancer itself. Voting Democrat bankrupts anyone who actually pays their own bills instead of collecting a check for a Democrat-created government “entitlement.”

Where is the healthcare plan promised to us years ago by the Republicans? Where is it Steve?

Well, what, can’t find it? I was being a good boy. And then the anti-labor bunch starts in on the middle-class.
So, here, now have some reality.

Nobody is going to win national election without the women, blacks, Hispanics, Sodom Gomorah crew, on board. And then, the 10 million who will lose their health insurance with Trump. And, the votes that Trump will lose by Republicans now suing for middle-class lower wages.

I ain’t stupid enough to believe those polls put out for ratings and profit by the establishment owned media. Trump is sucking air. He never could win.

Here’s another question that begs to be answered.

The Republican Party has put if right to work should be installed in the Virginia constitution, on the ballot for the voter to decide this November.

And yet, we have Virginia Republican Congresswomen Barbara Comstock, accepting $10,000 from a Union, the Seafarers International Union, in the 2016 cycle. See link below.

What did Congresswomen Barbara Comstock provide the Union for this $10,000?

On the one hand the Republicans put up a front to appear to be anti-union, while with the other hand reach out for a $10,000 check from a Union.

I would call on Congresswoman Barbara Comstock to return this $10,000 Union money back to the Union.

You can add the once great FBI on to your list of crooked.