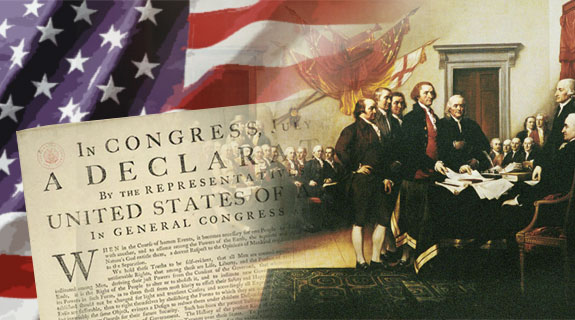 To Declare our Independence

It was 240 years ago that our Founding Fathers signed the Declaration of Independence. Â That inspired document, penned by Thomas Jefferson, gave a singular voice to the cry of a people yearning to be free of oppression. Â So determined were they, that they were willing to fight, and die, to obtain that freedom.

As we spend the long weekendÂ grilling andÂ watching fireworks with friends and family I wanted to take the timeÂ to provide a reminder of what we believed in back then, the injustices we were fighting against, and how these principles still apply today.

One of the most important parts of the Declaration of Independence comes in the beginning, when Jefferson lays out the philosophy that guides the hearts and minds of our leaders.

We hold these truths to be self-evident, that all men are created equal, that they are endowed by their Creator with certain unalienable Rights, that among these are Life, Liberty and the pursuit of Happiness.–That to secure these rights, Governments are instituted among Men, deriving their just powers from the consent of the governed.

How refreshing that our Founding Fathers had no problem mentioning God as the benevolent provider of human rights. It was so obvious to them to recognize and honor God that they considered it “self-evident.” Â Indeed, at the end of the Declaration, Jefferson appeals to “the Supreme Judge of the world for the rectitude of our intentions.”

Sadly, our country has fallen far from that self-evident knowledge when mention of the Bible, or even displaying the Ten Commandments, is forbidden in schools and public buildings, and people of Christian faith are called bigots and persecuted for their beliefs. Â We have fallen short of the example set for us by our Founders in this regard, and in others.

Not only does this document declare our independence from England and its king, but it also lays out exactly why we wereÂ leaving England’s control. Jefferson lists nearly 30 examples of oppression perpetrated against the colonies by the King of England. Â As I look at a few of the things on Jefferson’s list, I can’t help but see the similarity of abuses carried out by our own government against its people today:

He has called together legislative bodies at places unusual, uncomfortable, and distant from the depository of their public Records, for the sole purpose of fatiguing them into compliance with his measures.

This reminds me of all the ways the Government and bureaucrats make it purposefully difficult for the people to even follow what they are doing, much less succeed in petitioning the government for redress of a problem.

He has erected a multitude of New Offices, and sent hither swarms of Officers to harrass our people, and eat out their substance.

Sounds a lot like our massive bureaucracy (see Lois Lerner).

He has kept among us, in times of peace, Standing Armies without the Consent of our legislatures.

This is why we have the 2nd Amendment, folks.

He has combined with others to subject us to a jurisdiction foreign to our constitution, and unacknowledged by our laws; giving his Assent to their Acts of pretended Legislation:

International bodies like the World Trade Organization and the proposed Trans-Pacific Partnership presume to override our own national laws in the name of “Globalization.”

For depriving us in many cases, of the benefits of Trial by Jury:

Anyone heard of “indefinite detention?”Â  Not only that, but we are actively considering taking away the 2nd Amendment rights of American citizens without due process, simply because a government bureaucrat puts their name on a list.

For suspending our own Legislatures, and declaring themselves invested with power to legislate for us in all cases whatsoever.

Sounds more and more like our Supreme Court, where 5 unelected judges suspend the laws passed by our legislatures at will.

What has happened to America? Â How did we allow these things to come to pass? Â Why have we let our government grow so bloated, so uncaring, so unresponsive, that its corruption seems only to be eclipsed by its incompetence?

One problem we face, as I mentioned above, is the lack of acknowledgement and respect for our Creator. Â Our Founding Fathers understood that in order to have a just government with just laws, you must have a moral underpinning, and that morality comes from God. Â The leaders of our fledgling nation, from Washington to Jefferson to Adams, all recognized the importance of honoring and respecting God:

â€œIt is impossible to rightly govern the world without God and the Bible.â€ – George Washington

â€œWe recognize no sovereign but God, and no King but Jesus.â€Â â€“ John Adams and John Hancock

â€œThe Declaration of Independence laid the cornerstone of human government upon the first precepts of Christianity.â€ â€“ John Adams

â€œOur Constitution was made only for a moral and religious people. It is wholly inadequate to the government of any other.â€ Â â€“ John Adams

God who gave us life gave us liberty. Can the liberties of a nation be secure when we have removed a conviction that these liberties are the gift of God? Indeed I tremble for my country when I reflect that God is just, that his justice cannot sleep forever. – Thomas Jefferson

That last quote from Jefferson is particularly important. Â His words are a warning to the nation not to stray from grace. Â He is reminding us that the success that we have achieved as a country, the freedoms we enjoy, are the result of God’s blessing on our nation. Â If we move away from his teachings, if we refuse to acknowledge God’s dominion over us, then His blessing can be taken away. Â When I look around our country and see the hostility displayed towards people who only want to live their lives and run their businesses by their Christian faith, when I see the moral decay in our culture and the total lack of decency and honestyÂ in our politicians, I wonder how long it will be before God’s justice willÂ wake from it’s slumber.

We all bear the responsibility of our decline. Â None of us is without sin. Â It is always easier to “compromise” just a little bit, and give in to those who would lead us astray. Â But the demand for “little compromises” never ends. Â Once one is achieved, the next is demanded. Â Each of these “little compromises” build upon each other, over and over again, until we have fallen so far that opposing the idea of allowing grown men to use the same bathroom as little girls is considered hateful and bigoted.

It takes real courage, both moral and physical, to stand for justice and freedom. Â It is hard to stand for what is right and face the mob that calls for your head (both figuratively and sometimes literally). Â Our Founding Fathers knew this. Â They knew that by signing their names on the Declaration of Independence they were putting their lives on the line, and many of them paid the ultimate price.

It’s not too late to turn America away from the path of decadence and moral relativism. Â It’s not too late to take a stand for the values our Founding Fathers believed were self-evident. Â It won’t be easy, and it won’t happen overnight, but we can return our country to a state of grace. Â It begins at home, with a love and respect of family, and it extends outward from there.

On this day when we celebrate our Independence from England, I pray for our nation and for my fellow man that we will soon declare our independence from these new shackles we have placed on ourselves. Â I pray that we will find our way out of darkness and back into the light of God’s saving grace. Â I pray that I can do whatever I can to make America a better place for my children. Â Finally, I pray that God’s justice continues to sleep, just a little while longer, so that we may have the chance to fix what we’ve broken, before he decides to fix itÂ for us.

To Declare our Independence was last modified: July 4th, 2016 by Mick Staton

The Founding Fathers were clearly laying out a Christian nation upon which we could build the greatest nation on earth. Thank you for reminding us!