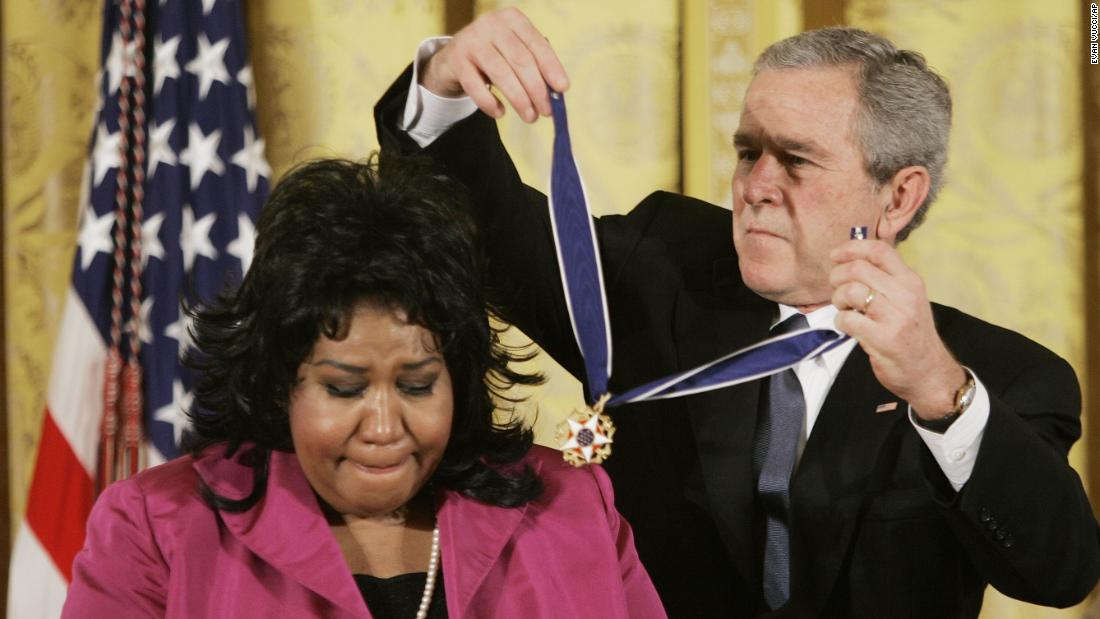 President Bush awards the Medal of Freedom to Aretha Franklin in 2005. Despite her liberal views, Franklin contrasts with today's entertainers who lack R-E-S-P-E-C-T

Aretha Franklin, the Queen of Soul, died Aug. 16 at the age of 76 after a long illness, and it didn’t matter if you were a liberal or a conservative, black or white, you loved her music and you admired her. And you may have even posted her obituary or music videos on Facebook, as I did.

But Franklin was without a doubt an advocate for liberal causes, notably, civil rights and feminism.  She was not a conservative, and while conservatives may disagree with some of the solutions proposed by these movements, they cannot discount her influence, and will respect her.

In a nice tribute in “Rolling Stone,” “The Political Power of Aretha Franklin”  an African American reporter Jamil Smith wrote this about Franklin:

Franklin did not consider herself an activist in the vein of [Angela] Davis. Though she supported the Black Panthers and toured with Dr. King, she did not view her contributions as equivalent to theirs. She corrected CNN anchor Don Lemon in 2015 when he asserted that she’d been “on the front lines” of the Civil Rights movement. Perhaps she felt that her role was to sing the final notes of our victories, as she did during Barack Obama’s first inauguration, or our defeats, singing “Precious Lord” at Dr. King’s funeral. She also sang to urge us to remain steady on the route to freedom.

Don Lemon did an hour long tribute to Franklin Thursday night on his CNN show, but I am surprised conservative media did not pick up on the fact Franklin was not just unique in her singing, but demeanor and ability to transcend the political divide, while being squarely in the liberal camp.

Of course, the biased Lemon missed the point, but so did the other commentators, including Jamil Smith. And that is — despite her political leanings, she met with both Republican and Democratic presidents, including receiving the Medal of Freedom from President Bush in 2005, and did not use the opportunity to bash Bush.

Although she sang at President Obama’s first inaugural, I am unaware of her participating in partisan politics, and yet, she is deified by the civil rights and feminist movements.

As such, she is a stark contrast to today’s singers and actors, who feel that they must photograph themselves with severed Trump heads (Kathy Griffin) or show album posters of a burning White House and dead Trump on the lawn (Pearl Jam) in order to influence people.  A minister’s daughter (a family friend of Dr. Martin Luther King), Franklin never used profane language to describe any politician, nor profane imagery.  Rolling Stone’s Smith adds:

Since the 1960s, nearly all African Americans have grown up with her voice being primary in our lives. Franklin articulated our experience through the common themes of love lost and gained, as well as respect sought. She did so in a way that was both digestible for the masses and uncompromising in its honesty about America, both past and present.

In other words, her music moved people to act without her having to call the First Lady a “feckless c—t” or fantasizing about “blowing up the White House,” as Madonna did shortly after Trump’s inaugural.

God rest, Queen of Soul, and I hope today’s generation of in-your-face entertainers will take a cue from the R-E-S-P-E-C-T you showed to humanity.

Great piece! I was thinking much the same. Simply put Aretha had class, which is rare these days.