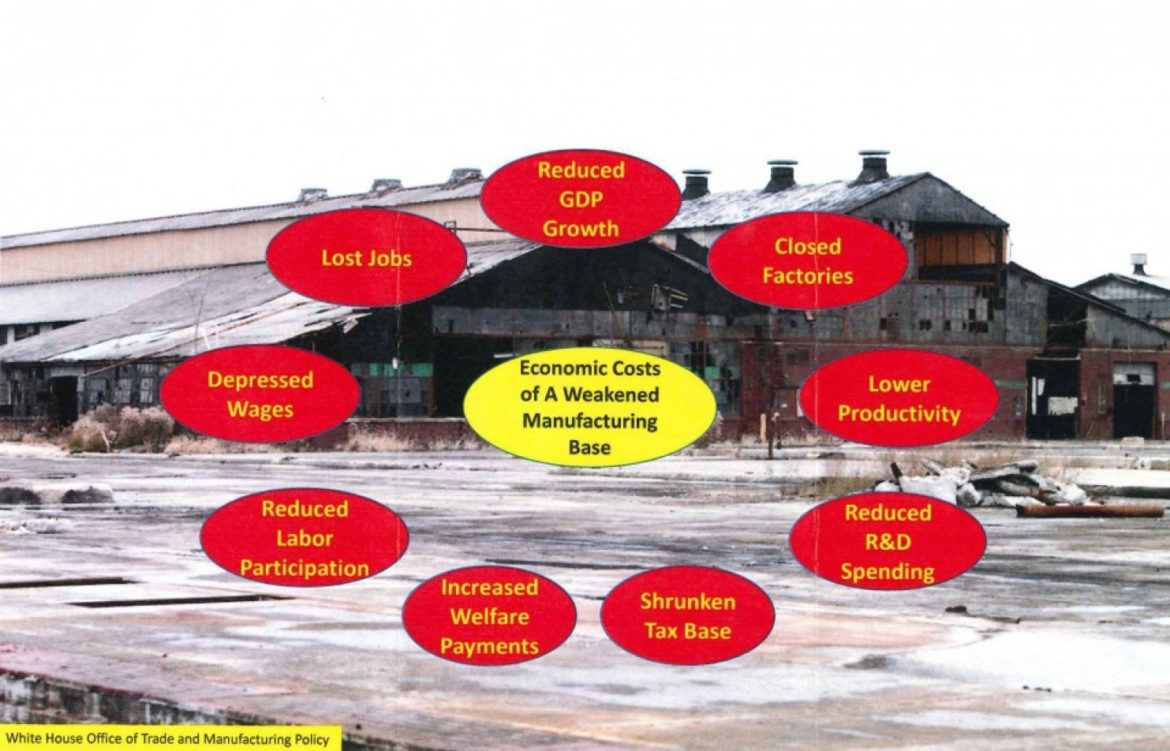 Administration needs to get going on helping “The Forgotten Americans”

Thanks to Donald Trump’s election as our 45th president, we finally have some national focus on “The Forgotten Americans,” specifically, the working class in the inner cities, Appalachia (coal country) and aging Rust Belt communities.

And, among the culprits that Trump brought to our attention in his 2016 campaign was demise of manufacturing jobs in part due to the Clinton administration decisions to enact NAFTA in 1993 and bring China into the World Trade Organization in 2000.

Collectively, those two decisions, supported by both Republicans and Democrats, led to the loss of  at least 5 million U.S. manufacturing jobs  – mostly in aging Rust Belt communities; the ones that put Michigan, Pennsylvania and Ohio into the Trump column in the election of November 2016.

Now, Trump trade adviser Peter Navarro has put official pen-and-paper together to connect the dots, with a two-page policy paper that essentially links many of the nation’s social ills to the loss of manufacturing jobs – some 21,000 plants have closed in this nation since 2001.

I cannot speak for whether abortion or infertility is related.  But as a 30-years-plus journalist who has covered the pharmaceutical industry and knows about overprescribing of medications, I do believe I have some expertise to talk about opioids.

In fact, the same Washington Post on March 30 reported in a feature investigation entitled “Disabled or Desperate?”  that there is SOME correlation with the loss of manufacturing jobs and the movement of millions of blue collar people on to disability (Supplemental Security Disability Income, or SSDI), and the overprescribing of opioids (i.e. OxyContin) for pain management.

Between 1996 and 2015, the number of working-age adults receiving disability climbed from 7.7 million to 13 million. The federal government this year will spend an estimated $192 billion on disability payments, more than the combined total for food stamps, welfare, housing subsidies and unemployment assistance.

Across large swaths of the country, disability has become a force that has reshaped scores of mostly white, almost exclusively rural communities, where as many as one-third of working-age adults live on monthly disability checks, according to a Washington Post analysis of Social Security Administration statistics…Rural America experienced the most rapid increase in disability rates over the past decade, the analysis found.”

The article makes no mention of “opioids,” but describes folks in rural Alabama going to “pain management” clinics, where you can bet they are prescribing pain killers.  There have been scores of articles about doctors and pharmacies becoming almost as bad as drug dealers.

One cannot get SSDI without having a bona fide disability and “pain” is on the list.  Hence, there is co-relation between folks out of work, on SSDI getting opioids or fentanyl, falling into addiction and dying.   According to the Post, some 116,000 people have died from painkiller abuse since 2000, and most of that in the last eight years.

Skeptics may point to state rankings showing that Rust Belt states like Pennsylvania and Ohio are not as high on the list as Colorado, Washington, Tennessee and Louisiana when it comes to opioid deaths per 100,000 residents.

However, in August, Science Daily reported on a peer-reviewed study in August, which found evidence that deaths from opioids are UNDERREPORTED.

The authors, from the University of Virginia, write:

For opioids, uncorrected mortality growth rates were considerably underreported in Pennsylvania, Indiana, New Jersey, and Arizona…For instance, Pennsylvania had the 32nd highest reported opioid mortality rate and the 20th highest reported heroin death rate, but ranked seventh and fourth based on corrected rates. Similarly, Indiana’s rankings moved from 36th and 29th to 15th and 19th, respectively, and Louisiana’s from 40th and 31st to 21st and 20th, respectively…”

As a journalist who has covered the opioid epidemic for many years – predating Obama – I really feel the main cause of opioid deaths is the failure of the FDA and Drug Enforcement Administration to stand up to pharmaceutical manufacturers and distributors, to limit prescribing of these medications to folks who have had surgery – not for overall pain management.

For years, our newsletters have had reports of addicted patients breaking into pharmacies to find Vicodin or OxyContin, and each time there is an effort to limit prescribing, drug firms that make the drugs step in with scientists and patients and tell how good they are.

Opioids, like antibiotics and other heavily-marketed prescription drugs, have been overprescribed for years.  There are few alternatives for pain management, too.

However, it is very sad that those who have job-related aches and pains are being put on these drugs in order to qualify for SSDI and other welfare benefits since they have no work.

Hence, I am pleased Peter Navarro made that link between the decline of blue collar jobs and the various ills facing “Forgotten America,” particularly the opioid epidemic.   I also am pleased Trump’s FDA is (finally) taking some action on opioids, but so far, I have seen no regulatory efforts to limit prescribing and marketing – which the agency has the power to do.

But it’s time for Trump to act on his promises to level the playing field on trade and restore our manufacturing base.  While it’s true that computerization and automation had a great deal to do with the loss of manufacturing and mining jobs, and that the quantity of jobs won’t come back, improving our balance of trade with the world and tax reform should improve our competitiveness.

In addition, I am awaiting a bill on infrastructure – another hallmark of Trump’s agenda—which will rebuild our highways, sewer systems and extend broadband to the very areas of rural America where people need the Internet capacity – and the jobs.  Trump and Congress made a big mistake not introducing that first, vs. the Obamacare repeal.

The goal should be to move us away from a “Dependency Society” and toward an “Opportunity Society.”  And, if the “Obstructocrats” and big money Republicans in Congress get in the way (i.e. “The Swamp”), then I hope the voters will pay them some retribution in the 2018 elections.