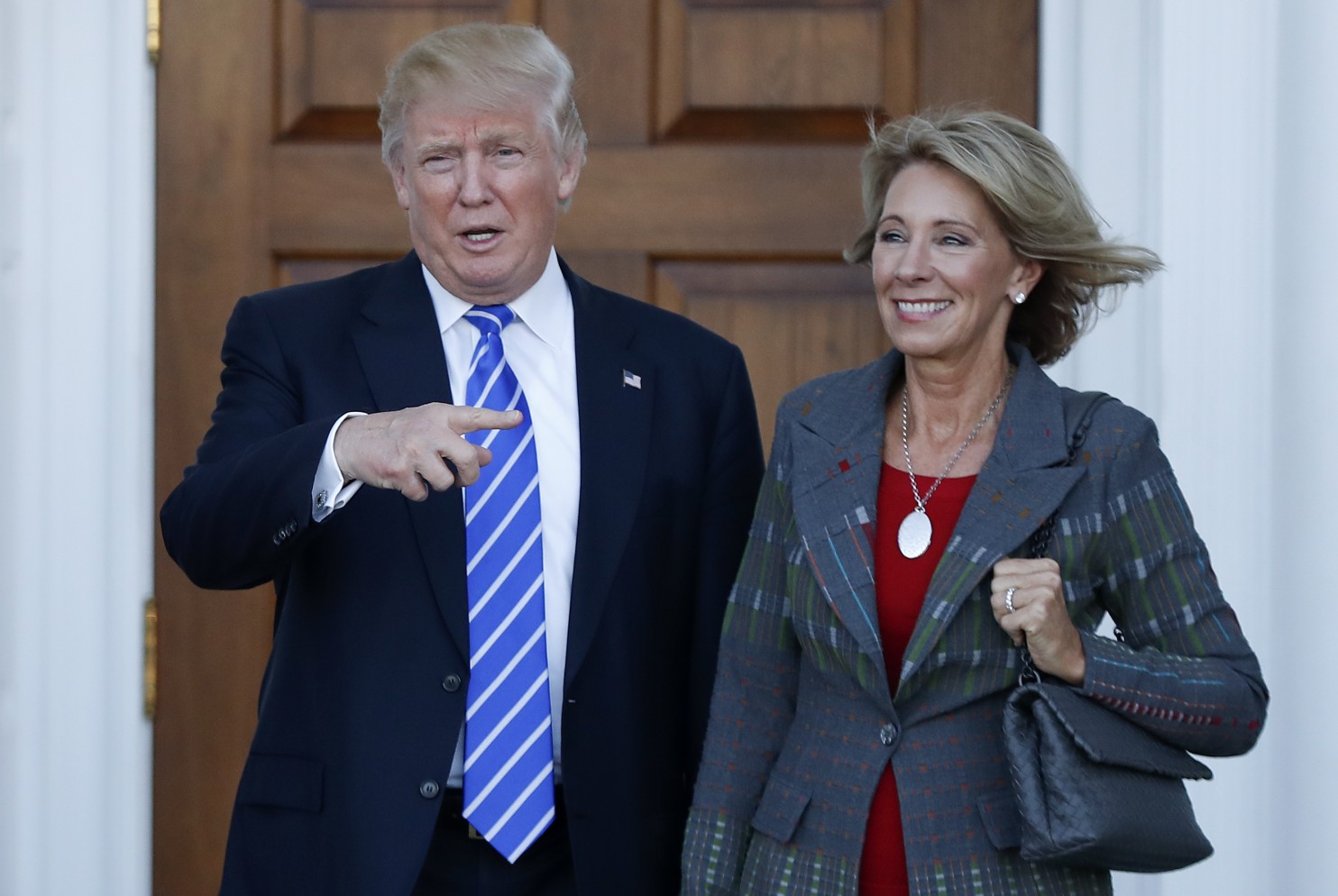 Governor of South Carolina Nikki Haley (R-SC) Â has been appointed US Ambassador to the United Nations. Governor Haley is the daughter of Indian immigrants and very popular in the Republican party. From the Washington Post:

â€œGovernor Haley has a proven track record of bringing people together regardless of background or party affiliation to move critical policies forward for the betterment of her state and our country,â€ Trump said in a statement. â€œShe will be a great leader representing us on the world stage.â€

Also announced today is Trump’s appointment ofÂ Michigan native Betsy DeVos for Secretary of Education. She is a very outspoken supporter of school choice and school vouchers. Â DeVos is the chairman of American Federation for Children, a group supporting charter schools and vouchers. Â From the Detroit Free Press:Â

He(Trump) would invest $20 billion in federal money toward school choice, and expect states to kick in $110 billion of their own money, to provide $12,000 each in school choice funds to the 11 million school-age children living in poverty.

In a statement today DeVos said,

The status quo in education is not acceptable,” she said in a statement Wednesday. “Together, we can work to make transformational change that ensures every student in America has the opportunity to fulfill his or her highest potential.”

In the coming days Trump is expected to announce the appointment of Dr. Ben Carson to lead HUD.

It’s a great big Hallelujah! for DeVos. Finally, someone in government that means business at reforming the educational labor union. Given the long-term consequences of the actions I’m sure DeVos will take, appointing her is likely the best choice President Trump will ever make.

All the Trump attaboys get blown out by one Romney ah shit.

I understand there is a reason to keep your enemies close, but the position of Secretary of State isn’t employment as the White house’s outhouse foot stool. And even then most Trump voters would look at the Head Latrine Cleaner Romney selection as an unearned reward.

Don’t I recall Haley doing all she could to discredit Donald Trump during his Primary Campaign? I th9ught she was definitly a RINO or are RINOs in now?

She is certainly not a RINO. She was very opposed to Trump winning the nomination.

Virginia should have hired Haley, or whoever it was who was able to bring all those good paying manufacturing jobs to South Carolina. In Richmond, the taxpayer pays millions to land a brewery. And, we got a couple Amazon warehouses in Virgina.

Now, South Carolina? They got Boeing, BMW, GE, just to name a few.

Maybe if Norment and McEachin had been on the phone with with Boeing instead of Ashley Madison, Virginia would have some decent paying manufacturing jobs. Maybe if Spender Howell had been on the phone with BMW instead of writing the largest tax increase in Virginia history, Virginia would have some decent manufacturing jobs.At least Nikki Haley knows how to use a phone and who to call.

Apparently, in Virginia the voters from both party’s prefer their leadership call Ashley Madison instead of major manufacturing companies looking for jobs, because they keep voting to re-elect and promote them?

Boeing, BMW, and GE went to SC years ago . . . back when McDonnell was governor as I recall.

I don’t give a rip about NOVA and their millionaire jobs. You are starting to bark like Tucker now.

All your comment does is confirm that what I said, has been going on a very long time. Virginia ain’t got nothing without the sucking the taxpayer tits jobs.

I notice you didn’t mention manufacturing jobs in Virginia?

Many companies have found it necessary to create lobbying groups in and around DC to protect corporate interests. Such organization create the information for laws and regulations.

I ran into a problem where the regulations associated with cleaners was so stringently written that better products were frozen out of the military marketplace. Even the Navy’s special ombudsperson couldn’t break the grip of regulation. Eventually, the Coast Guard adopted the superior product and broke the regulatory stranglehold.

Manufacturers go where they are treated best. Virginia is a blue state that benefits from NOVA’s proximity to an overwhelming federal government presence.

Use whatever excuse you would like. Bottom line is SC got the jobs, VA doesn’t. Then there is Tennesee, Alabama, who are also able to land major manufacturing jobs.

How many phone calls and e mails have you sent to your elected trying to get them to step up on good jobs? Not one i bet. I been complaining for years.

As long as Virginia has losers like Chichester, Howell, Norment, McDonnell, McAulliffe, in the drivers seat, Virginia is screwed. They are more interested in kissing the power company’s ass than anything else.

Taint an excuse but a fact. Businesses are wealth producing entities and wealth goes where it is treated best. We have had decades of abuse of businesses by governments at all levels who rob the “Peter” of business to pay for the”Paul” of the welfare state. Eventually, as Thatcher observed, you run out of other people’s money and that is why we have a $20 trillion national debt.

Nice move, Haley’s got the chops for the job and it will be good training if she wants to run for the Oval Office.

There is no doubt that Nikki Haley has presidential ambitions. This appointment sets her up very nicely for a complete resume. Smart move on all accounts by everyone. And DeVos has a good record as well. I would so much like to see funds for school choice and vouchers extend to the middle class as well, because we too have a problem paying for a non-public school education.

Eventually all children will have vouchers. Public schools are the last monopoly and they will fall like all the monopolies in the US.

The public education monopoly has proven to be a disaster of leftist indoctrination and public sector union control. The solution involves privatization, competition and parental control. Vouchers, therefore, are the only answer as anything with a federal government fingerprint aspires to the lowest common denominator of political power over the People.

I’m amazed, really, that so many people trust their children’s education to people they don’t know, so it is bewildering to me why public schools have gone on as long as they have.

I know ziptidoo about the history of children’s education, but I would assume that back in the olden days a parent hired someone to teach their kids, or their kids and some other people’s kids, and over time that grew into a school of some kinda that had teachers the parents trusted. How that then morphed into parents not having any idea who these people are, what they are teaching, having no control even over when the kid goes to school, etc, is hard to understand.

I also don’t understand how so many parents seem to not care whether their kids learn other important things like how to handle money, saving for purchases, fixing meals, etc, I mean what’s up with so many kids not knowing how to get a can opener and open a can of food and warm it up ?

This is a very astute observation. Over time, the road to hell was paved with the idea that teachers were experts and knew better than the parents who paid their salaries. This idea evolved into school boards, self serving public unions and a government power grab to indoctrinate kids.

The rise of home schooling and the persistence of private schools of all kinds is an indication of the damage of the “professionally run” monopolistic public education. Even many teachers know how bad things have become but are overpowered by the administrators and politicians. Parents who complain are “problems” as are many low income kids who are often out of control thanks to a value free home environment.

We can be sure that the MSM is working tirelessly to find a way to link Nikki Haley to the white supremacy movement.

She only needs one more K in her name to have KKK right in it.

Clever. After all, northern Inidans are the true Aryans, right?

That’ll be breaking news soon enough at the Washington Post.

And we can spell egg with the letters of your name.

There is no “s” in your name. We have to play a different word game.